Sener Ingenieria y Sistemas' FORAN System is a suite of software modules specific for the design and production of all types of ships and floating structures.

It is currently being used worldwide in a large number of shipyards and marine design offices. Its presence in the market dates from the late 60s, when the first license was granted to a shipyard, namely to E.N. BAZAN (now part of IZAR).

To ensure the program stays relevant, Sener has optimized the program by incorporating the latest technologies in information systems and in 3-D graphics hardware, and at the same time satisfied the ever increasing demands from very discerning customers for new and improved features.

Sener recently announced version 50, the next FORAN release, which it will launch during this year. This article highlights some of the main features of this new FORAN.

During the 80s, SENER developed its own software for the management of the FORAN proprietary database. However with the passing of the years and the appearance of new technologies, which at the same time is related to the ever increasing use of concurrent engineering technology, the decision to change this proprietary database and its associated management software has proved to be necessary. Thus in version 50 of FORAN the proprietary database has been substituted by a standard commercial relational database.

This solution has three fundamental advantages: the System becomes more open to users; the connection with other programs, in particular shipyard management systems, is facilitated; and the establishment of a distributed design office becomes more feasible. SENER has re-programmed all those areas of the System to do with the input/output of information, and has adapted the data structure to be in accordance with the requirements of the latest technology for database management.

Version 50 of FORAN includes a new module for the definition of ship forms using NURBS and the rest of the System has been adapted to be able to treat the resulting surfaces. With this improvement the traditional method of representing surfaces by a mesh of three-dimensional lines has been superseded. Thus the possible inaccuracies of this method that may be introduced when carrying out geometrical interpolations to calculate points and lines that are not contained within the main grid have also been eliminated.

The most important advantages of this change, according to Sener, are: possibility to define very complex ship forms to meet the current market requirements; more exact and reliable information for construction; and ease of use.

New System kernel Perhaps the most significant innovation in FORAN version 50 is the introduction of a new kernel for 3-D modeling and visualization. Completely developed using the latest object oriented technology; this new kernel is made up of a series of libraries of C++ classes, which cover all the principal basic functions of the System. By extension this technology provides the System with a greater robustness and stability. The new kernel integrates solid and surface modeling, and at the same time incorporates specific primitives for modeling of the structure (e.g. curved profiles with holes and end cuts) and parametric primitives for the definition of equipment, pipes, ducts and trays.

High efficiency visualization is based on the OpenGL standard and high performance 3-D graphics cards. The new visualization possibilities greatly facilitate the comprehension of the model in 3-D space and include: direct working with the solid model in shaded view, dynamic movement of the model to be able to analyze it from any view point and a complete control of light focus.

There are also interesting options for navigation through the model in real time.

The new kernel also includes a new graphic user interface (GUI) that is native to Microsoft Windows; that is to say that it is based on the intrinsic resources of the operating system and needs no emulation.

The rapid evolution of personal computers and the consolidation of Windows technology have given rise to the desirability of their use for sophisticated CAD/CAM systems. Many applications, which until recently could only be processed on cumbersome and expensive work stations using the UNIX operating System, can now be executed very advantageously on personal computers running under Windows (NT or 2000).

The new version 50 of FORAN has been designed specifically with this operating system in mind.

FORAN version 50 not only provides a very much improved user interface, but also at the same time enhances this facility with a very powerful command system.

New functions for basic design To reduce the design and production cycles, it is critical from the very beginning of a project to generate reliable information, information which can be reused when the detail engineering is carried out.

FORAN version 50 incorporates a series of functions for the preliminary 3- D definition of the ship model so that from the earliest stages of the project certain budgetary estimates can be carried out. Thus for example calculation of work content, weights, areas and other variables can be made, and this helps in the earliest possible definition of the product both from the technical and commercial viewpoint.

The new facilities will be used to train radio personnel at three Galician Nautical Fishery Schools comprising Instituto Politecnico Maritimo-Pesqueiro do Atlantico in Vigo, Escola Oficial Nautico-Pesqueira in Ribeira, and Escola Oficial Nautico-Pesqueira in Ferrol. Transas has supplied its latest generation TGS 4000 ver.2.0, which permits switching between simulated Sailor Compact 2000 and Sailor Program 4000 equipment. Each of the three systems is capable of providing interactive training for up to 10 Trainees simultaneously under the supervision of an Instructor. These units are the largest GMDSS simulators ever installed by Transas in Spain.

Other types of simulators installed by Transas in the three Galician schools are the shiphandling Navi-Trainer Professional simulator and Engine Room Simulator, ERS 2000. 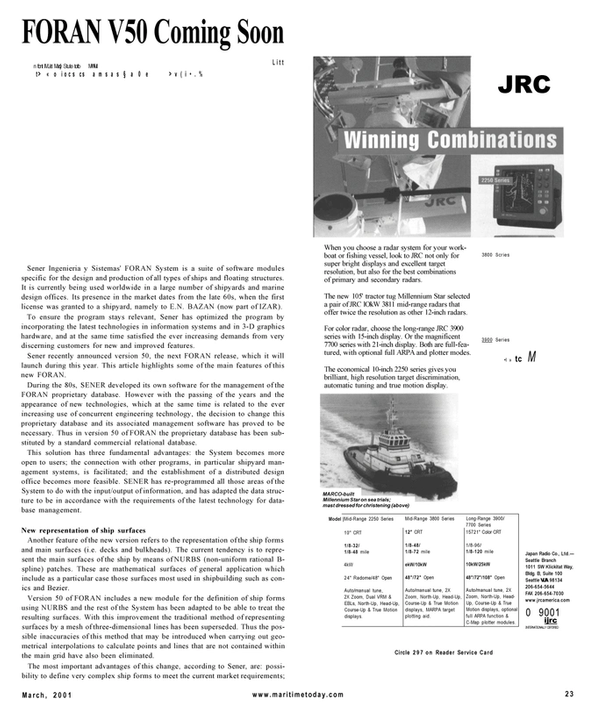