Titan Is Challenged In Persian Gulf

The vessel was transiting the area of Mina Saqr Port in Ras A1 Khaimah, United Arab Emirates on February 3 when it capsized and sank with full load of rock/boulders.

Prior to its salvage, the barge had been lying in 105 ft. (32 m) of water, its stern dug into a trench on the seabed over 98 ft. (30 m), with a list to port of 15 degrees. The hull was heavily imploded, cracked open and distorted along almost the total length of the port side shell plating. Significant damage had also been caused to the internal structure of the barge - resulting in most of the longitudinal and transverse bulkheads being breached.

Titan was granted the salvage contract in July 2000 and subsequently began mobilization of equipment in early August, from both the Fort Lauderdale, Fla. and New Haven, U.K. warehouses. A total of 20 Titan personnel, including a salvage master, naval architect, diver/salvors and hydraulic engineers arrived on site in late August.

Titan attacked the salvage project in a way that was most unique. The company proposed to lift and remove the vessel by way of Titan Pullers - a method that was developed and refined by Titan's own engineers.

This technique was created in response to underwater lift requirements when the weights of a vessel exceed the limitations of floating cranes, or when the open ocean environment renders the use of floating cranes impractical. The Puller is, in effect, a linear hydraulic chain puller, which is a simple yet effective device that, when used in different configurations, is capable of lifting heavy weights up to 300 tons. Another advantage of the pullers was that the lifting forces could be spread out over a large portion of severely weakened structure.

Positioned aboard two 5,500 deck barges (seven pullers on each barge) were 14 pullers totaling a combined lifting force of 4,200 tons.

Each barge was equipped with a four-point winch system, with 30-ton winches positioned in each corner of the barges, independent electric powered ballast systems, complete hydraulic systems to power the pullers and required ancillary equipment.

Divers burned pre-engineered lifting points to connect lifting chains from the pullers. The ALIA was then cut in half at the aft end of the three to four bulkhead. The forward section of the barge was raised on October 24 and towed to a governmentapproved site where it was to be set in place to serve as a fish haven. The vessel's aft section was lifted on November 28 upon which it was towed and released at the same approved site. Demobilization commenced immediately and was completed on December 17. 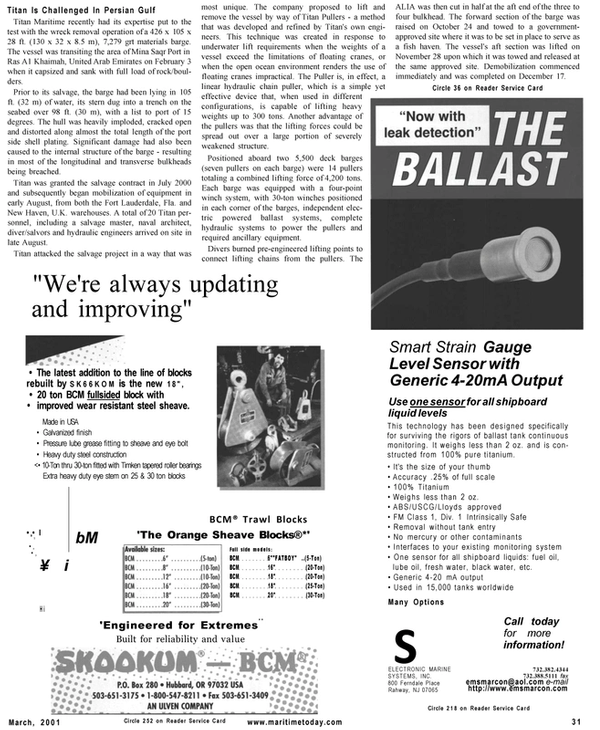