The largest Feadship to date has just been completed by the De Vries Shipyard, a 235 ft. (71.6-m) vessel named Utopia, which is currently being offered for sale. Utopia was initially part of a two-Feadship order placed in 2001 by a repeat owner, who passed away before the projects could be completed.

His widow decided to finish the other boat for herself and her children, and took delivery of the 126.5 ft. (38.6-m) Katrion in fall 2003. Utopia had been her husband's dream project, however, and so the family reluctantly asked Feadship to complete the yacht on spec and put her up for sale on behalf of the estate. Utopia is arguably the most complex Feadship yet built. The two-story engine room, with its separate control and generator rooms, is immaculate in every way. The helicopter deck includes a wealth of safety measures, such as a special device originally developed for French military purposes, which attaches the helicopter to the deck within a fraction of a second. Two tender bays on the lower deck house a Chriscraft Launch 28 and a custom-built Ribtec Riviera 850, launched by crane through hydraulically operated doors in the hull.

Dedicated entirely to watersports equipment and toys, the lazarette is gigantic.

While being extraordinary in technical terms, Utopia is also very much a family boat. The middle deck is devoted entirely to the owners, and there are five guest suites: three on the main deck and two on the lower deck. While a yacht of this length could easily have accommodated several more cabins in a different layout, the emphasis here is on spaces that are very generous in size. This onboard residence concept is further supported by top-of-the-range living facilities. There is a myriad galley and pantry options spread throughout the yacht, for example, as well as excellent accommodations for up to 18 crew members.

Utopia has enormous windows that give a bright and almost al fresco feel to many areas. High ceilings enhance the immense feeling of space, as does the way in which the door heights have been taken up to the ceiling cornice. The interior decor has classic influences in terms of its paneling, while the furniture pieces are modern and somewhat stylized.

The light oak with mahogany inlays and inlaid burl panels used in most areas enhances the contemporary f e e l . Overall, interior designers Redman, Whitely. Dixon, working initially with the owner's interior stylist Michael Mcquiston, have succeeded in retaining a sense of continuity throughout the vessel while also introducing subtle levels of variation in the carpets, fabrics and marbles. The result is a flowing interior that exudes understated elegance within a luxurious environment. 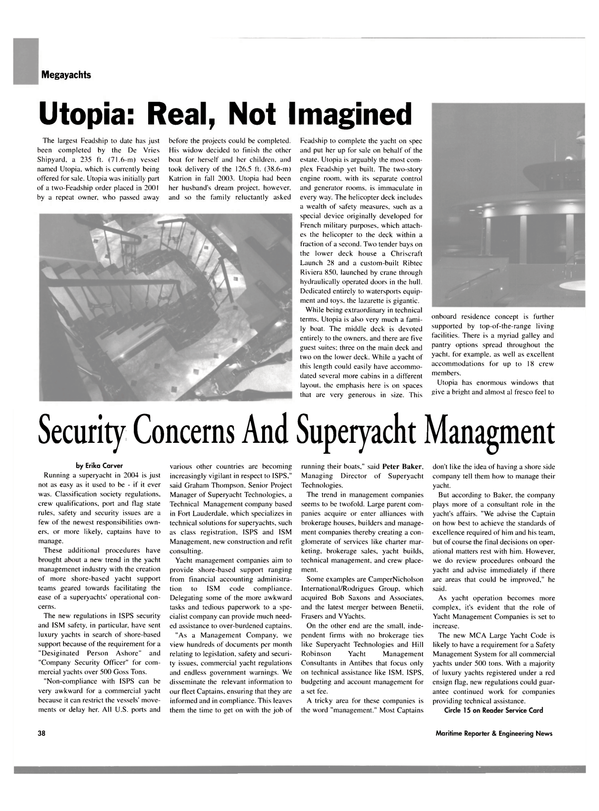 Other stories from October 2004 issue