Shale Oil Is it a Threat to Future Deepwater Development?

In general the floating production sector looks healthy and growth remains strong. But the sudden expansion of shale oil and tight oil production could disrupt the growth trajectory in the deepwater sector.

Deepwater
The underlying drivers for deepwater development point toward continued sector growth. Spot and futures crude pricing is at levels supporting deepwater development. Oil demand keeps growing and there continues to be need for new future sources of oil. The threat of supply disruption from traditional sources remains, prompting oil companies to look at alternative sources.
Activity in the deepwater sector is robust. More than 200 deepwater projects are in the planning stage that will likely require a floating production system for development. Deepwater drilling is at a high level of utilization. And the number of new deepwater projects coming into the planning stage is set to accelerate over the next few years as ~90 new drillships/semi rigs are delivered.

Shale Oil
But shale oil/tight oil development in the USA is accelerating at an extraordinary pace. A recent study by the Harvard Belford Center projects shale crude oil production in the US could approach 5 mb/d in 2017 – compared to around 1.5 mb/d in December 2012 and virtually zero in 2006.1 Wood Mackenzie is projecting that North American tight oil production will exceed 5 mb/d by 2019.2
The US Geological Survey in April 2013 estimated the Bakken-Three Forks formation in the US (one of the three major formations) has 7.3 billion barrels of technically recoverable undiscovered oil reserves.3 Five years earlier the USGS said the figure was 3.65 billion barrels.
Pioneer Natural Resources, the largest acreage holder in the Sprabery Wolfcamp shale oil field in Texas, in August told investors that the field “is the second largest oil field in the world,” second only to the giant Ghawar field in Saudi Arabia.4

Impact on Deepwater Projects
This sudden expansion of shale oil/tight oil has two potential repercussions. First, the supply of oil from these new sources will reduce US oil imports, make more crude available for other markets and ultimately drive down the price of crude. Second, oil companies will invest in shale oil/tight oil projects using capex that otherwise might be earmarked for deepwater project starts. Both spell potential trouble for future deepwater investment.

Cost Trends
A related issue is that the cost of producing shale oil/tight oil is falling – and the cost of deepwater is increasing. Shale producers are experimenting with much denser drilling on shale oil deposits and drilling/fracking technology is improving. These advances are driving costs lower.
Meanwhile, the cost of floating production is rising as projects go further out into deeper water. It is not uncommon to see deepwater FPSOs now costing $1 billion and more, up 30 to 50% from a few years back. In June the Egina FPSO at $3.1 billion set the record for the most expensive FPSO to date.

Implications
The volume of shale oil/tight oil is still small relative to total world crude production. It accounts for only 1.5% of current world crude supply – or about the same as the combined crude production of Ecuador and Algeria, both small OPEC producers. So at the moment it is a stretch to conclude deepwater is threatened by this new crude source.
But new sources of oil have a cascading competitive impact on existing sources. They knock out high cost supply sources first. While the high cost oil sands in Canada are most threatened by shale oil/tight oil, the more vulnerable deepwater developments could be next in line. Some signs are pointing in this direction. Several deepwater projects have recently been shelved or delayed – most notable being Hadrian and Mad Dog 2 in the Gulf of Mexico.
At minimum, all involved in the deepwater sector should keep an eye on shale oil/tight oil expansion. No sense getting blindsided by the land drillers. 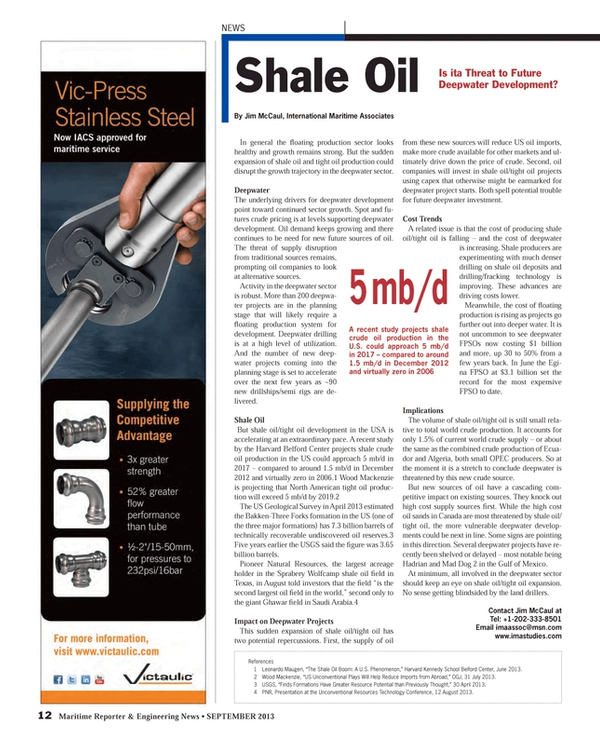 Read Shale Oil Is it a Threat to Future Deepwater Development? in Pdf, Flash or Html5 edition of September 2013 Maritime Reporter