Polish officers have earned respect in the engine rooms and on the bridges of the international shipping fleet. With more than 4,000 full or part-time students and about 600 graduates per year the AkademiaMorska in Szczecin, Poland, is assuring the continuity of this reputation.
In addition to Polish students, the Maritime University is serving international members of the maritime community with a number of English language programs. They also offer specialized courses tailored to the specific needs of individual shipping companies.
The AkademiaMorska in Szczecin is a university in every sense of the word, with undergraduate and graduate programs to the PhD level as well as staff that carry out research and publishes scholarly papers in various areas of maritime study. Studies are divided into three faculties: Navigation, Marine Engineering, and Engineering & Economics of Transport. Additionally there is an inter-faculty Department of Foreign Languages to teach English and other seagoing languages. Satellite campuses support specialized offerings, such as the Marine Rescue Training Center, to meet a variety of specialized maritime needs.
The university supports instruction across faculties with a variety of sophisticated simulators. For navigation and shiphandling a Kongsberg-designed bridge simulator in the Maritime Traffic Engineering Center has the capability of presenting more than 30 different real world ports in addition to “at sea” challenges to students. From separate rooms, an instructor can vary conditions including both wind and tide to replicate real time challenges. This simulator also can be configured as a DP Class 2 bridge to teach students, both undergraduate and returning part time, the complexities of operating vessels with the increasingly common technology.
In addition to the multitude of ports that are programmed into the simulator it can also replicate the size and handling characteristics of over 15 different ships. This is of particular significance when students are manning the vessel in simulated confined waters where everything from bank effect to the influence of other ships being met in a passage can be replicated.
Deputy Rector for Maritime Affairs, Capt. AndrzejBąk, has spent consider-able time at sea both before and after earning a PhD at the university.
“When students first come to the simulator,” he said, “they often approach it as a video game, but with the instructor’s ability to replicate a wide range of conditions encountered at sea or in harbor, they soon learn that operating a ship is a much more complex business.”
Undergraduates are not the only students doing course work. Experienced mariners also return for upgrading on specialized short courses. Licensed pilots from various ports have participated in refresher training as well as carrying out research with the simulator.
Another pair of simulators replicates the bridges of a cargo ship and an assist tug. With an instructor controlling weather and tidal conditions from a third room, a pair of students can work both the tug and the ship into a port. Ship-to-tug commands can be delivered by “radio phone” just as they would be in reality. On a recent visit an observer was impressed with the way in which, when wind and wave conditions were heightened the waves could be seen coming over the bow and washing down the decks of the assist tug as it came alongside the simulated ship.
The Maritime University of Szczecin is co-educational. Women enroll in all faculties, explained the university’s communications officer Bogna Bartkiewicz, but, for now, tend more toward the Faculty of Engineering and Economics of Transport (FEET). Established in 2002, FEET offers full time and part time studies in three fields: Management and Production Engineering, Transport and Logistics.
In addition to training students in shipboard services, the program can also equip students for jobs in the civil service and private sector.

LNG
The Liquid Cargo-Handling Simulator (LCHS) demonstrates this duality with ship and shore training.The LCHS lab includes a classroom set up with terminals for up to 16 students to simultaneously take part in tanker handling and safety activities, although instructor Karol Igielski prefers to work with about eight students at a time. The most dramatic aspect of the lab is the full simulation of an off load LNG port currently under construction on the Baltic Sea at Świnoujście.
In this simulator room a bank of screens on one side models the shore side port facility, due to open in 2014, while the other side of the room is from the perspective of an LNG tanker off loading at the facility.
The ship model is a representation, shown in great detail taken from the actual builders blueprints, of a Q-Flex LNG carrier. Nineteen of these ships, with capacity for over 210,000 cubic meters, have been built at several of the largest Korean shipyards for Qatar Gas, a major exporter of LNG.
Equipped with cargo re-liquefaction plants to return cargo boil off to the cargo tanks, the ships are fitted with a range of safety and fire fighting equipment that is replicated in the simulator model. “After they have completed their navigational training at the navigation simulator, they can come up here for the LNG offload training,” said Igielski, who has extensive knowledge on liquid cargo ships.
Working from his Instructor’s control center, Igielski introduces a leak in the simulator that is currently off loading at the Świnoujście port. A fire flares up at the manifold onboard the ship. The instructor watches for the student to turn on the dry powder and take other actions to contain the leak and the fire in the system that would also have undergone an automatic shutdown. Meanwhile, he could be watching the actions of another student who would be in charge of portside operations to see the he or she carried out the appropriate actions there. From separate consoles, shipside and shore-side, operators can communicate with each other to coordinate responses.

Training at Sea
But not all navigation training at the AkademiaMorsaka in Szczecin is classroom theory of electronic simulation. The university has an excellent training ship, the 60 by 10.5-m M/V Navigator XXI which was purpose built at the Gdańsk Shipyard Remontowa in 1995. With accommodations for up to 30 students, six researchers and 11 crew, the vessel carries a wide range of navigational and research electronics. An expanded bridge provides extra chart table and radar monitors for student use. A sophisticated side-scan sonar (272 TD; EdgeTech USA), as well as an array of other instrumentation, is installed for researchers.
A recent addition to the vessel’s electronics is a Kongsberg Maritime EM710 multibeam echo sounder. This device is a system for mapping the sea bottom working on sonar frequencies from 70 up to 100 kHz for a depth resolution of just one cm and a maximum working depth of 2000 meters. With transmitters affixed to the ships hull the system’s software provides compensation for the vessel’s role and pitch.
In late May the ship left Szczecin for a typical two-week voyage that would take 28 first year students on a familiarization experience. In the first week they would visit Kiel and then pick up three Polish fisheries inspectors. The ship’s crew would operate one of the ship’s two fast rescue craft to assist the inspectors in boarding fishing vessels of various EU nations in the Baltic Sea during the second week. A third component of the voyage would be the participation of a university researcher working with a new program in three-dimensional sonar image interpretation.

In the Engine Room
As a university, the AkademiaMorska in Szczecin undertakes leading edge research in a wide range of maritime related fields. The Faculty of Engineering has two teaching engines with one powering a generator and the other a shaft that passes through a watertight seal to a propeller in a large tank. This allows realistic torque loading and measuring. This engine, a classic built in 1956, has all the components necessary to introduce students to the principles of a diesel engine. To ready students for internships on deep sea vessels the faculty has operational simulators for a VLCC with a 5L90MC MAN engine and a containership with a Wärtsilä 12RTA84 main engine. Additional graphic simulators are provided for several more engine types.
At the same time, research is ongoing in areas such as after-treatment of diesel exhaust to meet the more stringent level 3 and 4 emission controls. In this work a new engine is installed in the shop and equipped with sensing devices to monitor combustion and other parameters. The after treatment device is tested for emission reduction at varied operational parameters. Other work, in the faculty research laboratory, works to determine variables in content and make-up of both oil and water in propulsion application. This is an extensive and complex facility with wide ranging capabilities for marine engineering research.
The Faculty of Navigation is also involved with cutting edge research. Deputy Dean of Science, Prof. Zbigniew Pietrzykowski has worked with his research-team to develop a navigational decision support system for sea-going ships. NAVDEC goes beyond the information coordination of ARPA and ECDIS to actually present navigational solutions to avoid collisions at sea by integrating the collision regulations with the electronic data received from the radar, AIS, electronic charts, GPS and other navigational aides. In the future, when both ships are equipped with NAVDEC, the systems will automatically communicate to assure that the two vessels make complimentary avoidance courses.
In a simulated demonstration, Pietrzykowski, showed how in a head on situation the system not only directs the navigator to alter course to starboard, but it also gives the new course in degrees. This will also take into account other targets in the area in the calculation. “In our system, the navigator can look at the screen and choose the best of the presented solutions,” explained Pietrzykowski, “for example the system will show him what course to take for collision avoidance in one minute or in five minutes.” Like so much of the research at the AkademiaMorseka in Szczecin, the NAVDEC system is complex and deserving of an article of its own. Much additional information on research is available by contacting the university at: http://www.am.szczecin.pl/en/about-the-university. Those interested in such maritime research will do well to bookmark this page. Similarly those who are looking for quality graduates or cadets from engine room to deck officers will also do well to keep this impressive institution in mind. 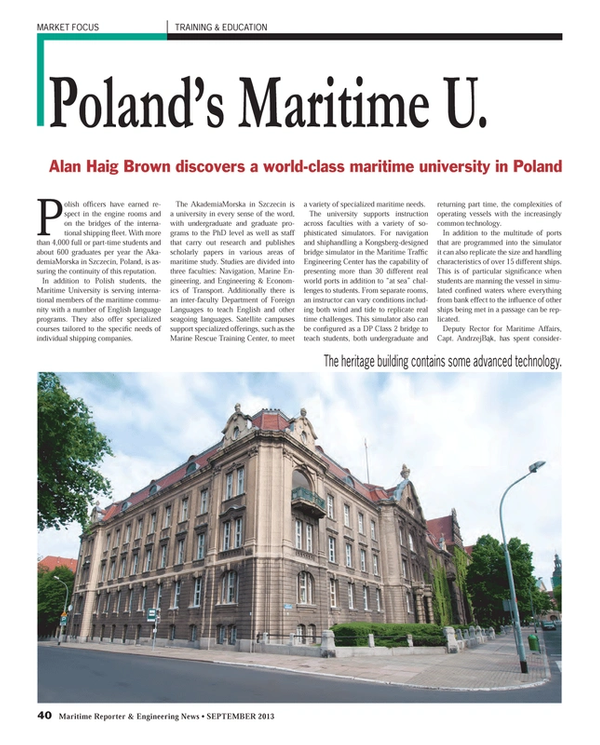