Mitch Hausman, President & CEO of Delta Rigging & Tools, Inc., discusses his company’s strategy to expand its core business through acquisition, including insights on its largest ever: the purchase this summer of Morgan City Rentals.

Delta Rigging & Tools is a provider of a wide range of Industrial lifting, rigging and associated products, serving diverse markets from energy to transportation, maritime and offshore to name but a few. The company is on a mission to grow both organically and through acquisitions, a strategy clearly evident in the maritime and offshore sectors with its recent purchase of Morgan City Rentals, which is a leading provider of offshore rental equipment and rigging supply in the Gulf of Mexico.
“One of our key strategic initiatives has been increasing our  rental and rigging business, and to go deeper into the offshore oil and gas drilling and production markets,” said Hausman. He said that the Morgan City Rental deal was particularly attractive as the company, led by Joe Sanford, Jr., comes complete with a high quality, long-tenured management team.  Similarly attractive was the breadth of the company’s product and service offering, as well as the fact that there was very little crossover among the company’s existing client base. “It was pure growth for us,” said Hausman. While he declined to share the purchase price of Morgan City Rentals, he did say that it was the largest acquisition to date for Delta Rigging & Tools’. “Once we began discussions, it was clear that combining with a large and growing operation like Morgan City Rentals  the transaction would be transformational for both companies.

Strong Roots
Hausman is relatively new at the helm of Delta Rigging & Tools, having joined the company in December 2011 as President and assuming the role of CEO in January 2013. But he is hardly an industry neophyte, as prior to this he spent 31 years with Southwest Wire Rope, serving as President and CEO of that company for more than 20 years.
“I actually retired in 2010, but re-entered the business simply because of the unique opportunity with Delta Rigging & Tools. Delta Rigging & Tools is an acquisition business within the Austin Ventures portfolio,” Hausman said. “Delta Rigging & Tools is a unique hybrid within the industry because we offer both rental and rigging. “With the acquisition of Morgan City Rentals a larger percentage of our revenues are now geared toward the rental market.”
Looking at the domestic heavy lift business today Hausman sees plentiful small, privately owned companies; many family owned and perhaps with questions regarding leadership succession. Quite simply, many companies in this realm are seeking to monetize the business. But he said that a small percentage of the deals presented fit the company’s criteria, as they seek to expand the depth and breadth of their markets and customer base, not simply bolt on revenue. In step with the industry’s progression, changes are inherent to the business of heavy lift itself. “The business is very different today from the point of view of scale, as the lifts are getting larger,” Hausman said. “Plus, requirements from a material point of view are becoming more stringent and regulatory compliance is a much bigger part of the process.”

Promising Future
“I see a positive uptrend in the Gulf of Mexico for 2014,” Hausman said, “but we were expecting more of an uptrend in the second half of this year. I honestly think this is simply due to project lag: GOM projects are taking longer to come together.” The Morgan City Rentals acquisition is a key plank in the company’s plan to tap this growing market, and as a testament to the strength of the Morgan City Rentals brand and the leadership team, Hausman said it will be positioned as “Morgan City Rentals - A Delta Rigging & Tools Company”  and left to operate as its own brand. ” This is significant in that ever since 2002, Delta Rigging & Tools has integrated all acquisitions into the Delta Rigging & Tools’ brand.”
Established in 1970, Morgan City Rentals is headquartered in Morgan City, La., with additional locations in Golden Meadow and Broussard, La.  It provides a wide range of offshore rental equipment, wire rope, rigging hardware & supplies, sling fabrication, and compliance load testing to the offshore oil and gas industry.  Combined with Delta Rigging & Tools’ existing operations in Broussard and Houma, the acquisition of Morgan City Rentals establishes Delta Rigging & Tools as the leading offshore rental and rigging company in the Louisiana gulf coast market, according to Hausman. “We’re always looking for acquisition opportunities,” Hausman said. “The Morgan City Rentals deal was unique in that they had both components of rental and rigging, and Delta Rigging & Tools was already built up on those two platforms; this combined with the fact that 100% of their rental market was offshore and our traditional legacy rental market was onshore it was just a perfect fit.” While the offshore energy market is an obvious focus of many maritime entities, the land-based energy production, specifically the revolution of shale gas and the accompanying oil finds, is proving to be a fast-growing and lucrative market for many, from the companies that carry the products from field to market, examples include the inland boat and barge builders, and heavy lift companies such as Delta Rigging & Tools. “This is absolutely impacting our business in a positive way, as we have facilities as far north as Williston, North Dakota, with 18 locations overall.”
“My career has been interesting because I started in a privately owned business that grew to a significant size and  sold to a publicly traded company in 2002. Then In 2010 we sold  again to another publicly traded company. That’s when I retired. This  phase of my career is probably the most interesting of all, as it is a very aggressive and fast-paced growth strategy.” 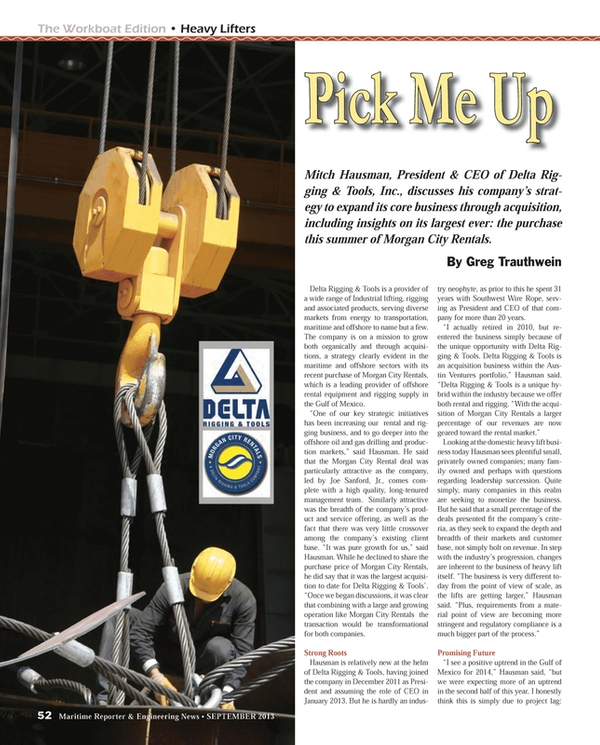 Read Pick Me Up in Pdf, Flash or Html5 edition of September 2013 Maritime Reporter