Liebherr reports that there has been a positive trend in the heavy lift crane segement, a sentiment confirmed by a number of significant contracts recorded of late, including a contract for the delivery of six heavy lift ship cranes for the German shipping company Rickmers.  Four of the heavy lift cranes are type CBB 4700 with a lifting capacity of 450 tons and the remaining two are type CBB 3450 with a lifting capacity of 120 tons.  The six heavy lift cranes are being built by Liebherr-MCCtec Rostock GmbH and will be delivered in 2014. They will be installed on two ships in the Hudong-Zhonghua Shipyard in Shanghai, China and in the future will handle heavy and general cargo all over the world. In comparison with previous units of the same ship type, the crane capacities have been increased from 400 to 450 tons, a key factor in improving the ships’ utilization.
The heavy lift cranes of the CBB series excel in their fast and precise Litronic control system, which is also used in offshore and mobile harbor cranes. Moreover, the CBB cranes have a comparatively low total weight and a low center of gravity.
Business relations between Liebherr and Rickmers date back to the 1970s. In 1985 a special board crane emerged from the cooperation between the two owner-managed family businesses. For the first time the crane was positioned at the side of a container vessel rather than on the vessel’s center line. As Liebherr noted a year ago on the occasion of SMM 2012 in Hamburg, there is a positive trend the maritime heavy lift crane segment, and the range of heavy lift ship cranes will be extended by one type per year. In future, cranes with lifting capacities of up to 1,000 tons will be included in the ship crane portfolio.

Liebherr Expands in the U.S.
The Liebherr Group earlier this year unveiled its strong commitment to growth potential in the North, Central and South Americas regions, including the Caribbean, with the Grand Opening of its brand new sales and service center in Miami, FL, a facility which represents an approximate $20m investment. The new state-of-the-art facility – which this year will accommodate about 52 staff with ample room for expansion – is located in Hialeah Gardens, and will serve as a major hub for Liebherr’s maritime cranes division and will further strengthen business relations to Central and South America and to the Caribbean region. The newly built complex is situated on a total property area covering about 431,000 sq. ft. (40,000 sq. m.). The building has a total area of 41,000 sq. ft. (3,800 sq. m.). 23,000 sq. ft. (2,100 sq. m.) of this is office area and 18,000 sq. ft. (1,700 sq. m.) can be used as storage area.

Qube Orders Liebherr LHM 280 For Melbourne
2013 has been a good year for Liebherr Maritime Cranes in the Oceania region, with deliveries of mobile harbor cranes, ship to shore container cranes, and straddle carriers to the area. Ship to shore container cranes have been delivered in Tauranga, New Zealand and Melbourne, Australia, while Liebherr straddle carriers are now operational in ports at Lyttelton and Tauranga, New Zealand. In Australia, the Liebherr Mobile Harbor Crane has been the popular choice, with two LHM 550s and one LHM 420 delivered to Patrick Stevedoring Pty Ltd. in Henderson, Western Australia, at the turn of the year. Also on the Australian west coast, a LHM 280 has been commissioned in Geraldton for operation with the environmental bulk handling system the Rotabox, while LHM 280s in both Fremantle and Bunbury are been assembled now. All three machines are for the company Qube Ports & Bulk, which provides services and facilities in 28 Australian ports. In total, Qube handles more than 40 million tons per annum of bulk products and expects volumes to increase.
www.liebherr.com 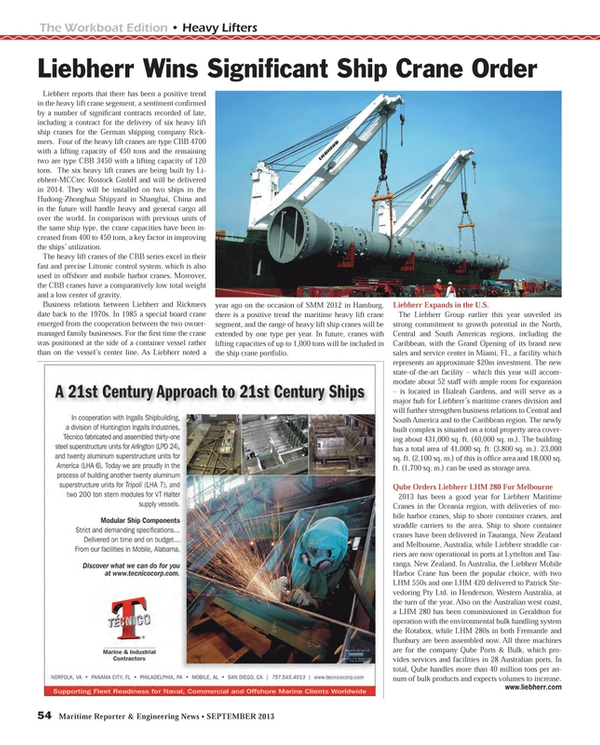