The Society of Maritime Industries is the voice of the U.K. maritime engineering sector, and its Chief Executive John Murray is the very public and indelible face of the organization. SMI promotes and supports the interests of organizations with activities and interests in this sector both to its membership and the wider world. In total it is a trade association of more than 150 organizations across the maritime, offshore energy, subsea, naval and academic sectors, and the society has been busier than ever, as a number of drivers have buoyed the prospects of all matters maritime in the U.K.

Four Key Drivers
The issues driving the maritime and offshore sectors in the U.K. are similar to many drivers to the larger global maritime world, as Murray points to four key drivers as keys to business, present and future:
Autonomy
Climate change (and the need for ‘green’ ships and renewable energy)
Research & Development, and
The U.K. Navy business.
“(When I say autonomy, I mean) autonomy both in terms of automation in the operation of ships and other maritime equipment and autonomous devices and systems in respect of the demand to lower the cost of ocean surveys and de-risk defense and security operations,” said Murray. “Furthermore there is the requirement to extract mineral resources from the ocean, such as deep sea mining, which can only be feasible through the extensive use of autonomy.”
While SMI, its leadership and member companies are well in tune with the cyclical nature of the various markets they serve, Murray is quick to point out that the four big drivers are all ‘big picture’ items, meaning that while they will fluctuate due to near term events, they are all solid pillars for growth, citing renewable energy and the current low price per barrel of oil as leading examples.
“Those who believe that the rapid fall in the price of oil will put a damper on the need to seek more environmentally sustainable sources of energy are deluding themselves,” said Murray. “In Europe there is a legislation to ensure governments take steps to raise the share of energy consumption produced from renewable resources to 20% by 2020.  Currently there are huge developments taking place in UK waters and by 2020 there will be around 10GW installed providing 8-10% of the UK’s annual electricity requirements.”
While investment in the U.K. Navy is far from tops in the world, Murray maintains that the UK still has a substantial naval ship and submarine build program. More importantly, perhaps, has been the realization in political circles of the depth and breadth of the Navy shipbuilding program to all of England, and not simply the coastal areas. “We have made tremendous inroads” (into the minds of government), said Murray. “Politicians now are realizing the economic impact as well as the jobs impact.” He noted that it was only five years ago that there was a real threat to the progression of the U.K. aircraft carrier program. To aid the education effort, SMI produced a map of Britain illustrating supply chain constituency. “There were lots of red dots all across Britain, and that really hit home with a lot of our Parliamentarians,” said Murray.
Globalization and legislation has been the impetus for many of the drivers, producing opportunity and challenge in nearly equal measure. “If I take just one example, prior to the global financial shock shipbuilding was in the ascendency in many regions, at unsustainable levels it has to be said, which opened up market opportunities,” said Murray. “This has slowed substantially but increasing environmental legislation is creating a new opportunity which many UK companies are in a position to exploit.  Innovative technology is the key and the need to increase R&D investment has been recognized in recent years by the UK government which has been supporting the maritime sector through technology funding competitions.”

Areas of Growth
Those engaged in any aspect of maritime and offshore are always keeping an eye on the horizon, courtesy of the inherent cyclical nature of the business. When talk turns to growth opportunities in the context of the U.K. market, Murray says Defense specifically and the utilizing the full spectrum of the marine environment broadly as two areas that look strong today.
“This is controversial in some quarters but in the U.K. there is the successor program to renew the nuclear deterrent fleet and the NATO requirement for member countries to allocate 2% of GDP to defense spending,” said Murray.  “Both topics will be ones a new UK government will need to address. However, as always this decision cannot be taken in a vacuum from the political tensions threatening global and UK security. I may be a simple engineer but the current tensions in the Middle East, dealing with illegal immigration in to the European Union across the Mediterranean Sea, Russian expansion in Eastern Europe and protecting UK territories in the South Atlantic will surely point to the need for more ships and maritime technology.”
While defense spending is relatively easy to identify and quantify, the much broader notion of the full exploitation of the marine environment for transport, food, energy and minerals is a concept that is being taken up by groups large and small around the globe, as companies and governments strive to balance investment and return on matters maritime.
“This is where I could get on my soap box,” said Murray. “There are just so many circumstances in which the maritime sector impinges on the lives of every single human being and, yet even in this small island, few appreciate the scale of it now or its potential for the future as the opportunity to exploit our land based resources become scarce.  The ocean has it all and it will need marine scientists and engineers to exploit the opportunities in a sustainable way.”
A prime example of this, he believes, is the stature and growth of the offshore wind industry. “One of the things we have going for us is the huge expansion of Offshore Wind, which requires many of the maritime skills (people and vessels) that the offshore O&G.”

The $39B Conundrum
Forming relationships is a big part of John Murray’s job, and recently one was formalized with another group which, in step with government, is geared to drive the collective industry further faster. “The marine manufacturing and engineering sectors represented by four groups in the UK, one of which is the Society, formed an alliance, called the UK Marine Industries Alliance, in 2010,” said Murray. “This brought together shipbuilding, ship repair and marine equipment for the commercial market, offshore renewables, naval defense, leisure and small workboats, maritime engineering consultancy and design, maritime security and marine science and technology.”

Who is John Murray?
A graduate chemical engineer, Murray commenced his career in the oil industry.  An active period of trade association involvement in another sector, while John he ran his own company, ultimately led to Murray deciding to become a trade association professional and he was appointed Chief Executive of the Society of Maritime Industries in April 2001. Murray currently represents the industry on a number of external bodies including the UK Department for Business, Innovation and Skills sponsored Marine Industries Leadership Council, of which he is a Vice Chair and also the Chairman of the Council’s Technology and Innovation Group.  He also serves on the Board of SEA Europe, based in Brussels; a member of the Advisory Council of the National Oceanography Center; a member of the UK Government’s Marine Industry Liaison Group of the Marine Science Coordination Committee; and a member of the Transport Advisory Group of Innovate UK’s Knowledge Transfer Network.

When the topic turns to government John Murray comes alive in discussing the inroads and its impact on the industry as a whole. “When I came into this sector and I mentioned the word ‘maritime’ to anybody in government they immediately assumed ‘sun-set industry’ seeking a hand-out.  The reality was that they were 30 years out of date and because industry had got used to going it alone they had become self-sufficient.  The U.K. maritime engineering sector had evolved, helped in part by the boom in North Sea oil, but also by developing their technology in response to global trends and becoming exporters in a big way.  Many of our members count exports as being responsible for 75% of their turnover.” The key to this renaissance is not accountable to any one entity of group, rather an increasing willingness for the plethora of marine and maritime business interests to work together and produce a united front.  “Although we got the ball rolling around six years ago there was a quantum change when the marine manufacturing and maritime services sectors produced an authoritative study articulating the economic benefit of the sector to the UK in terms of gross value added, employment and tax revenue. The figures made government sit up especially as it placed us higher than aerospace.”
This has manifested itself in a number of ways.
There has been a substantial increase in government support for R&D through a series of competition calls.
There is a marine export strategy, supported by the government’s export agency, UK Trade and Investment, plus there has been an increase in the number of government officials charged with assisting with the sector’s growth strategy, particularly in getting the message across the plethora of government departments and agencies.
The government announced a Maritime Growth Study with the purpose of ‘keeping the U.K. competitive in a global market.’ The report is scheduled to be finalized in the summer of 2015, and has been buoyed by “tremendous response” from all parts of the industry.
While there has been tremendous growth in the relationship between industry and government inside the country, Murray and colleagues know that foreign governments are beyond its sphere of influence, thus he categorizes the industry’s chief challenge going forward as such.
“Put simply (the biggest challenge today are) barriers to trade,” he said. “I am concerned that there is an increasing tendency for developing nations to insist on ever more stringent ‘local content’ rules in order to develop their own indigenous industry.  This is a challenge for more advanced nations and drives the need for continuous innovation in technologies and business processes to meet those challenges.”
Together with the government was developed an industrial strategy for the sector with the objective of growing its value to the UK economy from $26.5 billion to $39 billion per annum by 2020.  “All of this is only the beginning of a long process to place before policymakers and the general public the message that our industry is as relevant as ever to the country’s well-being as when Britain ruled the waves 200 years ago.” 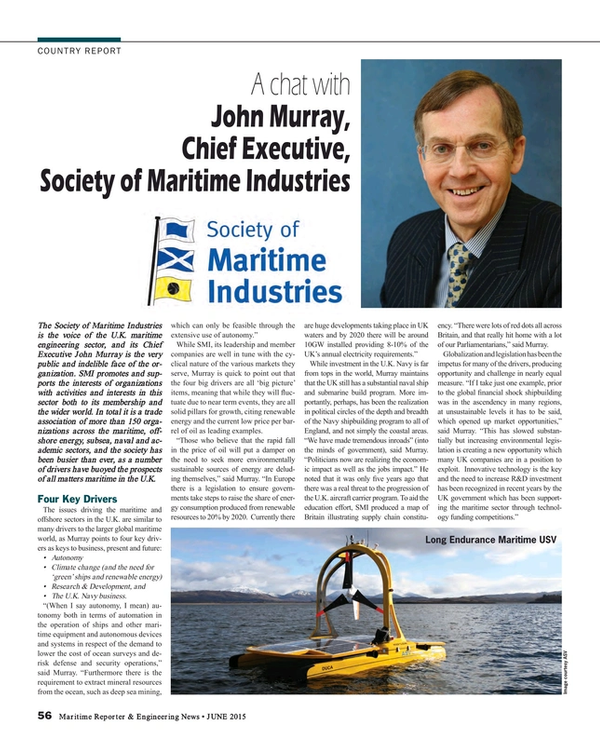