“Britannia rules the waves” paid a glowing tribute to the maritime past of the United Kingdom.  Over the past three centuries as the sun began to set on the British power, resilient U.K. with its pioneering characteristics began its voyage of transformation to become a world-class maritime services center, with one of the largest clusters of marine insurance, ship finance, law, classification societies, ship broking, education and consultancy organizations.
Significantly, two factors were responsible for this change. The first being marine transport, since it was the only point of access to the British Isles, and the second was the maritime trade and naval power that have had a great impact on the maritime sector influencing the country’s economy for several centuries. Thus building, equipping and maintaining the fleet became an immense operation, and entire industries grew up around it. The country’s marine industries are known for their strength and vibrancy built on a global outlook coupled with an expertise in advanced engineering and the ability to adapt and to innovate.
Around 95% of U.K.’s trade is carried on by sea through nearly 180 ports annually handling cargo totaling 512 million tons. Shipping has been a major source of growth for U.K.’s economy over the last decade, following a dynamic revival of the U.K. fleet. Latest data shows that shipping, ports and the maritime business and services sectors: contribute £31.7bn to U.K. GDP,  support 537,500 U.K. jobs and provide £8.5bn in tax receipts to the U.K. exchequer.

Shipping is a high-productivity industry requiring a stable and competitive environment in order to continue to thrive. The Government’s continued commitment to tonnage tax is crucial to ensure that the U.K. remains an attractive location for maritime investment.
The diversity of the U.K. Maritime Industry is immense. In fact it covers everything from shipping to sub-sea technology, ports to aquaculture, and maritime legal and financial services to leisure. It directly employs approximately 410,000 people, making a massive contribution to the country’s economy.  Today, it boasts of being the largest maritime sector in Europe.
The country’s technological leadership is well-established in offshore oil and gas extraction, marine manufacturing; yacht designing, building and racing. The U.K. has some of the most prestigious cruise companies in the world; and London is the world’s center for maritime financial and legal services.
Broadly, U.K.’s maritime industry can be classified into four important sectors:

■  Naval
While the Royal Navy is the principal end customer for this sector, U.K. companies also look to the export market for growth opportunities, based on the strong foundation of domestic success. Export expansion is a priority for the naval sector with support from U.K. Trade & Investment Defense & Security Organizations, and the government. Key initiatives include the Global Combat Ship export drive and the ‘Exportable naval technologies’ innovation theme. U.K. NEST (Naval Engineering Science & Technology) provides a forum for common development such as developing the next generation of engineers. Heading the list of U.K.-based companies in this sector are Babcock Marine, BAE Systems Maritime, BMT, Rolls-Royce SEA, SELEX, Thales, Ultra Electronics to mention a few.

■  Commercial
Merchant shipbuilding has traditionally been the country’s forte. U.K. companies retain strong intellectual capabilities and physical infrastructure. The expertise and facilities are now being used for new markets such as offshore renewable energy, and are also being adapted to new client needs. Marine systems and equipment form a major element of U.K.’s exports. While the naval equipment sector is important, the global merchant shipping industry provides a massive market for commercial systems and equipment. A&P Group, Alicat, Babcock Marine, Cammell Laird, Chemring Marine, Hamworthy, Kelvin Hughes, Rolls-Royce, SELEX and South Boats are some of the major U.K. players in this field.

■  Leisure
On a growth trajectory the leisure marine sector is driven by mostly of SMEs, with nine of the major operators representing 25% of the market. The U.K. spearheads the world’s manufacturers for quality powerboat production and for building a range of high value sailing yachts. The U.K.’s growing superyacht industry, with a turnover of around £420m a year and over 3,600 employees, is globally recognized for maintaining high standard in production. The leisure sector mixes service and manufacturing, from surveyors and charterers to specialist equipment manufacturers and three world leading marine leisure clothing brands. Many leading international yacht designers are based in the U.K.  Raymarine, Sealine, Avon Inflatables, CJR Propulsion, Fairline, Halyard Marine, Sunseeker are established leaders in the field.

■  Offshore ‘Renewables’ Sector
The past decade has seen a surge in demand for secure, sustainable low carbon energy sources. This has created a new market in offshore renewable energy in the U.K. The primary customers are electricity providers such as Scottish and Southern Energy and Scottish Power Renewables. The U.K. leads the world in licensing offshore wind energy sites, and developing wave and tidal energy devices. It is home to world class testing centers such as EMEC, NAREC and Qinetiq. Important opportunities lie in optimization for manufacture and installation, and in through-life operation of offshore energy farms. Companies such as Marine Current Turbines, Pelamis Wave Power, Royal Haskoning and Tidal Generation Limited (owned by Rolls-Royce) have carved a niche for themselves among renowned offshore renewable operators. 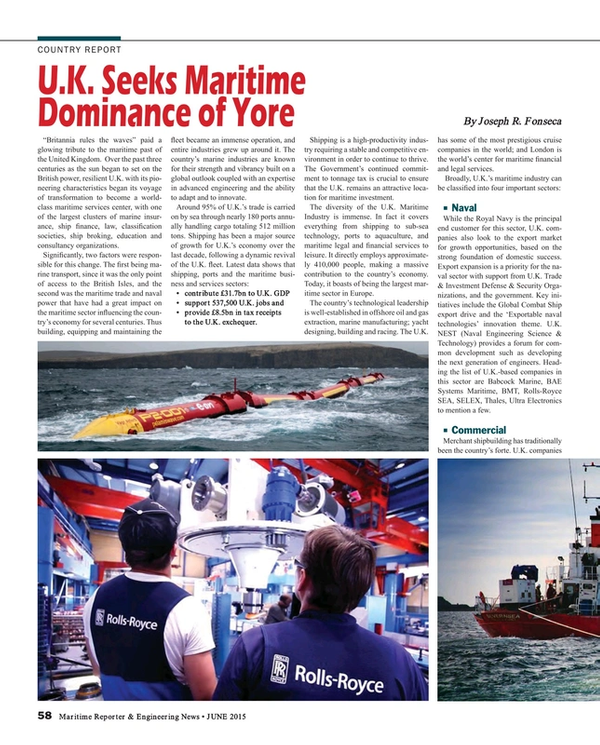