The United States marine casualty reporting and investigation processes as administered by the U.S. Coast Guard are seriously flawed and in need of major overhaul.

It’s the Law
Federal law directs the Coast Guard to prescribe regulations on the marine casualties to be reported and the manner of reporting.  Marine casualties involving death, serious injury, material loss of property, material damage affecting the seaworthiness or efficiency of a vessel, or significant harm to the environment are defined by law as reportable casualties.  Federal law also directs the Coast Guard to prescribe regulations for the immediate investigation of marine casualties to determine, to the extent possible, the cause of the casualty; whether there was any misconduct or negligence that might result in any action against a seafarer’s document or license or the assessment of a civil penalty; or whether there is need for new or amended laws or regulations.

Given that the Coast Guard’s ability to consistently implement and enforce its current marine casualty reporting and investigation processes is over-taxed, I recommend that the Coast Guard cease this endless suffering from self-inflicted wounds and reduce the program to its foundational requirements.

Regulations promulgated by the Coast Guard include a very detailed, extensive, and confusing definition of “marine casualty or accident” along with a separate (but no less detailed, extensive, and confusing) definition of marine casualties that must be reported to the Coast Guard.  The regulations further provide that, upon receipt of information of a marine casualty or accident, the Commandant or District Commander will immediately order such investigation as may be necessary.  Coast Guard guidance, policy, and tradition basically require that each reported marine casualty be investigated, although there are different levels of investigation, depending upon the severity of the casualty.

Amending the Law
The reporting regulations should immediately be amended to reduce the requirements, particularly with regard to personal injury and property damage.  There are many minor injuries necessitating more than first aid (such as a sprained ankle) that should not require a marine employer to file a report with the federal government.  The current property damage provision (any damage exceeding $25,000) is ridiculous.  Very little damage on a commercial vessel can be repaired for that amount today.  In addition, how is a master to determine the cost of repairs when the extent of damage is only partially known?  This provision results in masters reporting almost all damage.

The IMO’s Casualty Investigation Code contains a more practical approach to both issues.  It defines marine casualty to include, among other things, the serious injury of a person or material damage to a ship.  Serious injury is further defined as an injury resulting in incapacitation where the person is unable to function normally for more than 72 hours, commencing within seven days from the date the injury was suffered.  Material damage is further defined as damage that: (1) significantly affects the structural integrity, performance, or operational characteristics of marine infrastructure or a ship; and (2) requires major repair or replacement of a major component or components.  These IMO definitions are concepts that mariners can readily grasp.

Formal investigations, including Marine Boards, should continue to be reserved for the most serious marine casualties.  These are the ones most likely to provide lessons learned so that mistakes are less likely to be repeated.  These reports must be written for maritime professionals, not bureaucrats.

Finally, to make finalized marine casualty investigations more accessible to industry and the public, the format of those investigations should be changed to place all personal identity information (which is subject to the Privacy Act) in a separate annex.  Then the final report, without this annex, can be quickly released and posted on the internet.

The Coast Guard has taken some important steps at improving the marine casualty reporting and investigation processes, such as hiring more civilian investigators.  But until it addresses the root causes of the problems, it will just be applying bandages to broken legs.  It is time to keep those legs from breaking in the first place.

The Author
Dennis L. Bryant is with Maritime Regulatory Consulting, and a regular contributor to Maritime Reporter & Engineering News as well as online at MaritimeProfessional.com.
t: 1 352 692 5493 / e: [email protected] 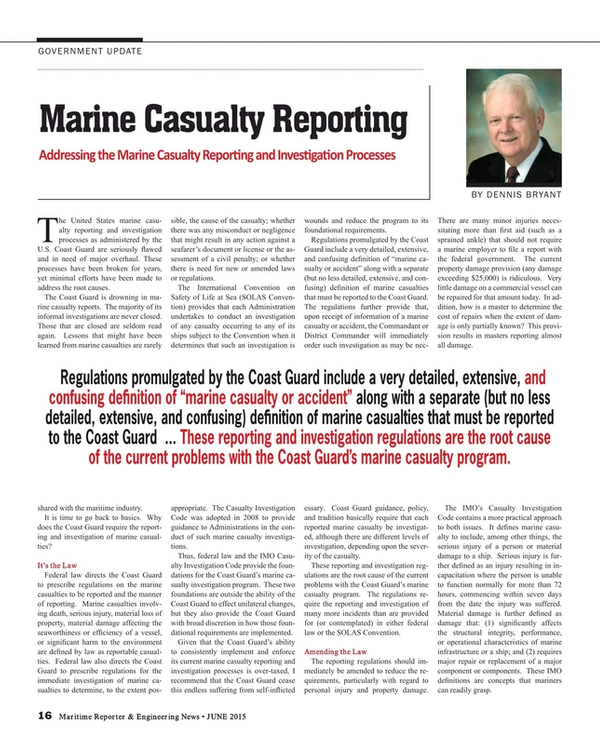