Yacht service, refit, repair and maintenance yard Marina Barcelona 92 (MB’92) has awarded a contract to Pearlson Shiplift Corporation (PSC) for the design and supply of a new ship lift and transfer system as part of an expansion project underway at its Barcelona shipyard.
The yard’s new ship lift system will benefit from PSC technology originally established in 1957 with the invention of the Syncrolift system by Raymond Pearlson and its subsequent development worldwide. Expertise accumulated over more than 50 years is now vested in PSC under the direction of Douglas Pearlson, company president and son of Raymond Pearlson.
“The overwhelming advantage of ship lift systems is they lend themselves to a land level transfer system,” Douglas Pearlson said. “With a ship lift system, especially with a broader scope onshore transfer system, the dry-docking capacity is only limited by the amount of land that’s available to bring the vessels onshore.”
The first phase of the MB’92 ship lift project will provide an 81- by 20-meter platform with the capability to lift and transfer mega yachts of up to 105 meters long. The system is designed to enable future increases in length and capacity for mega yachts of up to 120 meters long. The largest mega yachts can be docked in the graving dock, which is located in the expanded MB’92 site.
“The configuration of the lift can be easily expanded. The design of ship lift facilitates very easy expansion because you are just adding modules at the end of the lift,” Douglas Pearlson explained. “As the requirement for docking larger vessels is identified, the length and capacity of the ship lift can be expanded accordingly.”
The shiplift and single level transfer system has been custom designed to maximize the productivity of the MB’92 site layout. The transfer cradles will enable mega yachts to be moved longitudinally and laterally between the shiplift and the designated shore maintenance berths using rail mounted, rotatable bogie units.
Pepe García-Aubert, managing director of MB’92 said, “We have found the original ship lift and transfer system installed at MB’92 in 1999 to be a cost effective and reliable docking and transfer solution which is ideally suited for the mega yacht market. It was the obvious solution for our expansion project and we are delighted to have the support and expertise of the team, which originally invented and developed the Syncrolift ship lift technology.”
The new shiplift and transfer system will incorporate shore berths for up to nine maximum length mega yachts. It is expected to become operational in the last quarter of 2017.
www.shiplift.com
www.mb92.com 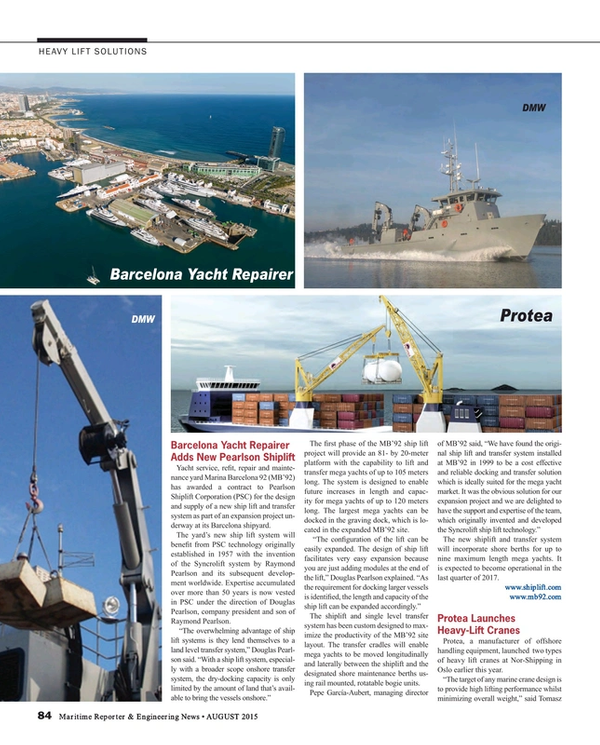