At first, the oil-price and project-cancellation forecasts had hushed the audience at FPSO Europe Congress 2015. Speaker No. 1 had delegates looking at each other for signs of fear. Then, rival contractors — veterans of many a bitter tender — piled on the logic of their own methods for cost-cutting in floating production storage and offloading projects. Rather than stamp out competing arguments, a relentless costs discussion had another, unexpected effect. It lifted the gloom and crystallized the opportunity at hand to engineer FPSO demand.

By the third coffee break, successive speakers had inadvertently spelled out why floating production storage and offloading vessels, or FPSOs, have a competitive advantage over platform designs. Nervous smiles formed across the room, as delegates that started on-edge saw that they alone might hold the key to making oilfields competitive at 60-dollar oil.
A consensus of contractors, lawyers, oil company technical directors and hopeful suppliers agreed by halftime that the “meddling” of oil companies or the desire of operator engineers to engineer the perfect, custom-made FPSO was the No. 1 cost inflator. This excessively “prescriptive” approach to building FPSOs, it was agreed, was not the “functional,” “trust-the-vendor” spec-making that saved countless engineering man hours and time to first oil.
SBM Offshore Group Technology Director, Michael Wyllie, says trends in floating production design have long driven costs and they still are, along with the demands of “deeper, harsher, frontier, arctic, older and extending design life.” In response to escalating costs, there were “three challenges” to bring costs down. Standardizing where possible to make “easier” hulls and housings was easier when done for a specific region, rather than globally, where reservoirs, geography, geology and local practices might offer a chance to economize on excessive design.
“You can create blocks of standardized components,” says Wyllie. Topsides, he says, are less easy, and moorings and risers are “the other challenge” when standardizing, a nod to the power of design-engineering over final outcomes and decision-making.
“When it comes to the marine environment (subsea), forget it. None of (wires and umbilical) is standardized. Every project is different.”
But water-separation modules and power generation are two more equipment sets that can be standardized. Elements aimed at well stream that is variable appear to be the only hindrance.
“There are lots of opportunities (to standardize),” he says. The ratio of things that can be standardized on an FPSO design are “70:30, but about 30 percent of it will always need to be project-specific or customized to a certain extent,” Wyllie says, adding that to standardize can mean to “sub-optimize.”
“(Industry) engineers are very good at optimizing the hell out of every project,” he adds, saying hulls, water injection modules and oil-water separation modules “all present an opportunity to standardize.”
No. 2 was FPSO simplification, as was successfully applied with 50 percent more oil capacity and 100 percent gas capacity using a gas-phase membrane in two SBM FPSOs in Brazil.
“What we need is a way to find options and components that we can use to try to achieve the complete specs required by the reservoir and yet simplify and sub-optimize. We need the vendors’ to help. We have a lot of (technology) but not all of it is qualified for offshore.” He says qualifying programs — “Someone has to take the risk” — are needed to get newly standardized equipment offshore, especially since, “New technology exists that could really drive down costs.”
He pointed to a collaboration with Shell on the BC-10 FPSO offshore Brazil where standard steel risers given buoyancy sufficed to cut weight and connect wells for “a complex project.” At the Gulf of Mexico Stones FPSO, a first “disconnectible” unit for the area, specs came from the oil company to qualify riser technology to help with a difficult reservoir, 2,900-meter water depths and project profitability.

A lot of playing
Avoiding excessive design, driving simplification and assembling vendors is best done at the yards, most, if not all, agree.
Thyl Kint, BW Offshore’s chief technical officer, is a proponent of finding savings at the yard, presumably during the engineering procurement and construction, or EPC, stage of a contract.
Like Wyllie, Kint agrees, there’s value to be had for clients in the familiar, especially for the international oil companies.
Operators’ strategic desire to own an FPSO can cost them “a quarter billion (dollars) more,” Kint says.
He points to today’s contentious two models for engineering an FPSO, the FPSO contractor way or the “FEED plus Asian yard turnkey.” Base costs rise for oil companies while they wait on that front-end engineering. There’s also the 40 percent of EPC to be found in equipment and materials, where uncertainty can be high.
Instead of working with the yards and their suppliers, engineering through a contractor offers some advantage.
“We have a lower cost structure than our clients,” says Kint. Indeed, he says, of 28 FPSO contractors most are “heading for bankruptcy.” Part of the reason is oil companies caught in the trap of over-designing.
“It’s playing. That’s why (they want to design vessels themselves),” he offers in partial jest.
BW Offshore handles an annual capital expenditure and operating cost burden of $1 billion across 17 units. One of those, the Catcher FPSO, will produce 60,000 barrels per day and 60 million cubic feet of gas per day in the central North Sea when its newbuild hull, built in Japan, and its Singapore-made topsides begin production in mid-2017. In sum, a management burden not many contractors or oil companies can hope to successfully oversee.

Prescribed and functional
While the “lease” versus “own” models are well known, less common is the creeping cost discussion we hear in London, and the pitting of “functional” specs versus an oil company “prescription.”
Despite the risks of overdesign and of a prolonged FEED, the “prescribed” or operator-led design and cost model does offer some advantages. Sevan chief business development officer, Fredrik Major says one key advantage is technology development akin to SBM’s. “There’s the potential to optimize (technology),” Major says.
Oil companies can help qualify designs, much like Statoil qualifies offshore vessels. Some operators have “20 guys” developing new technology for their vessels, although the results can be “a nine-month” FEED. Work with a yard’s designer and EPC program can mean “34 months to first oil.”
“We can save about a year by going the functional spec route,” says Wyllie of using a contractor like SBM and letting them provide a vessel based on the oilfield’s well stream. Kint agrees: “Come to us,” he says, “especially if you have a marginal field.” An oil company decision to go it alone with a yard can cost $500 million, says Kint, adding, “Do we need to be so prescriptive?”

Country savings
Unlike the more seasoned international oil majors, the national oil companies are also a driving force in driving down costs. They’re of necessity “less prescriptive” and bring other advantages like local workforces and finance. They’re also less likely to be the ones requesting new software to operate or monitor turbines and pumps, “another $10 million to $15 million saved.”
To lure FPSO opportunity for their local content and national wealth needs, West African yards — like Paenal at Porto Amboim, Angola with its 2,500-metric-ton crane and 500-meter quay — offer VLCC berths and space for topsides modules. SBM and Synergy have entered into a JV to extend engineering possibilities near these productive hydrocarbon basins.
“Big projects are going to be finished by (national) infrastructure funds,” says Basma Hassan, the former CEO of Bumi Armada. He sees a new finance regime for FPSOs, as oil still offers nation-building wealth creation and yards keep economies robust.
“East Asian yards are offering fantastic financial packages,” Hassan asserts, adding, “That can swing (the market).”

New for new-builds
Chinese national construction banks? “You can get 90 percent financing,” a delegate says. China’s yards went into expansion mode between 2002 and 2005, but contractors say the growth has dispersed engineering skills locally. While “just one yard” might be everyone’s favorite for building FPSO topsides in Asia, there’s a consensus, it seems, that the “FEED-plus-Asian yard” isn’t the only model that works for oil companies building floating producers in Asia.
The new-build is still seen as a viable “cost-cutter,” even if it costs “a billion dollars.” Though BW reports short-term demand for leased FPSOs is uncertain, with 50 percent of marginal oilfields in danger of being cancelled, the new-build FPSO offers an unexpected attraction, especially in Brazil, where “most projects at $50 dollar are still profitable,” given an FPSO is used. While no repeat of the dozen vessels ordered in 2014 is foreseen this year, the uncertainty is total given the value in FPSOs, including new-builds, as scalable oilfield development options.
“If yards are hungry, new-builds can be cheaper than conversion,” says Hassan, although some recent deals have seen conversion hulls fetch $50 million to $100 million. One contractor points out that new-builds remove uncertainty in projects and can offer “a geographical aspect to decisions,” giving any given unit an identity and a region in which to operate. They can be made redeployable with the same plant to meet different well stream and thus save future modifications costs. Yet, this is exactly the type of standardized engineering solution that still seems to escape designers.

IOC involvement
Despite their ability to turn a profit at a marginal oilfield, vessels leased from contractors aren’t, perhaps, as numerous as they could be. It took a lawyer at an FPSO conference dominated by engineers to explain why some of the heavy involvement of oil companies in floating production contracts can result in fewer vessels, despite all of the advantages of finance and local content they bring.
Apart from being “too prescriptive” in their dimensional demands, especially for new-builds, “Oil companies involve themselves to share the performance risk in order to then justify less in day rate,” one delegate lawyer was heard saying. For their part, “FPSO contractors want parent company guarantees, but (oil company) home offices are reluctant, so there are fewer FPSOs,” the lawyer says.
Despite the many ways FPSO leasing and operating contractors offer to place a production unit, complex oil company conversions of VLCCs will likely continue, however costly, slowed only by rising VLCC carrier rates and hull prices.

Developing model
Beyond the backlog playing itself out in Asia’s yards in 2015 is capacity that seems likely to grow even with EPC contracts from FPSO contractors and more direct oil company involvement.
Now contractor FEEDs, like Yinson Production’s January 2014 Eni Ghana FPSO win, signals the new wave of engineering, where oil company and contractor use an oil-province yard, in this case for Ghana’s Offshore Cape Three Point project.
Yinson FPSO boss, Eirik Barclay, looks confident as he relays the news of the company’s 11th FPSO project, part of the spoils of picking up Fred Olsen Production, but also a sign that deepwater projects thought too expensive at 80-dollar oil are doable with FPSOs. Barclay points to four projects in West Africa and one in Vietnam as proof of the new operator-contractor success model. The conference would yield more confirmation that African governments will do what they can to bring down FPSO costs.
“There’s been a lot of escalation, but costs are coming down,” says Kint, adding, “We don’t know how much more they will come down. We don’t know how, but they’re coming down.”
Kint’s advice to oil companies waiting for prices to fall is to get engineers to spend less time defining “what’s out there.”
“Don’t focus on ‘the what.’ (Price) depends on who does the job. Focus on who’s going to do it.”
After the technical work, there’s money to save by “going where the competence is.” 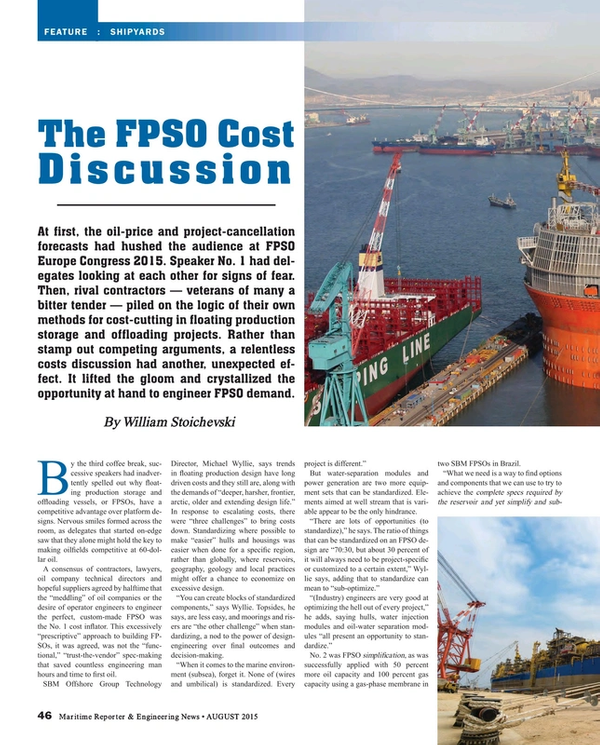