Whether voluntarily or as required by the International Safety Management Code, the American Waterways Operators’ (AWO) Responsible Carrier Program, or some other rule or regulation, investigations of accidents and near-miss situations are routinely conducted by companies in the maritime industry. This is due to the widespread recognition that careful examination of the root causes of such incidents can help to prevent future occurrences. Faulty procedures, defective equipment, and inadequate training can all be identified in the investigation exercise. Conducting investigations is now a critical part of the job for vessel officers, shoreside safety managers, and company executives.

No capable attorney would advise their client to refrain from conducting accident or near-miss incident investigations. For one thing, strict adherence to the requirements of the investigation section of the company’s operations manual, the ISM code, or the RCP may be important in defending future litigation to prove that “due care” was exercised. It may also be important in maintaining qualifications to perform customer work or in adhering to covenants and conditions of insurance policies or charter parties. And the worst mistake that can be made is to fail to secure and preserve evidence or, worse, to fail to prevent the destruction or alteration of evidence relevant to the occurrence of an accident. So called “spoliation” of evidence can lead to dramatic results in litigation, including being stripped of defenses or having a jury instructed to disregard all of your other evidence as being untrustworthy.

Any lawyer who does maritime tort work, such as personal injury, property damage, collision, or oil spill cases, is nevertheless dismayed when presented with a client’s file that contains damaging admissions of fault in an investigation report. “If only you’d have called me when the accident happened,” he or she says to the client, “I could have conducted an investigation that would have been protected from disclosure to other parties as ‘attorney work-product.’” Some readers may not realize that the protection against having to disclose reports and material created during an investigation conducted in anticipation of litigation was first recognized in a maritime case. Samuel Fortenbaugh, of Philadelphia’s gone but not forgotten Clark Ladner, Fortenbaugh and Young, was nearly tossed into jail for contempt of court for having refused to obey a federal judge’s order to turn over his notes of statements he took from the crew of his client’s tugboat. Fortunately, that judge was overturned on appeal, leading the U.S. Supreme Court, in the case of Hickman v. Taylor, to give its blessing to Mr. Fortenbaugh’s theory. As a result, the Federal Rules of Civil Procedure were amended to incorporate the attorney work-product doctrine in the discovery rules applicable to all federal cases. The general rule is that materials and information gathered by a company’s representative, including its attorney, consultant, or agent, if gathered in anticipation of litigation, are not discoverable by the opposition. Even if a compelling need is shown for the discovery of those materials, such as the complete unavailability of certain information by other means, the mental impressions, conclusions, opinions, or legal theories of the attorney or other representative must be protected.

Most sophisticated companies in the maritime industry and elsewhere recognize that getting an attorney on the scene to preserve and protect evidence and information is important when an accident is likely to lead to a lawsuit. That is because the well-known but often misunderstood attorney-client privilege might serve as an additional obstacle to the ultimate discovery of harmful statements or evidence.

The attorney-client privilege is different from the above-described work-product doctrine in one or two important ways. First, except in limited circumstances such as the furtherance of fraud or criminal conspiracy, the privilege is absolute. Whether or not litigation was anticipated or whether or not the other side has some type of need for the information, statements made by clients to attorneys in the context of seeking legal advice are confidential and cannot be compelled to be revealed. However, this does not mean that by merely telling your lawyer about a fact, you can keep the fact from being discovered by other means. Moreover, if the person talking to the lawyer is not actually the lawyer’s client, the attorney-client privilege does not pertain either. For example, a statement made to a lawyer by a third-party participant in an accident or a witness, even if that witness is a company client’s employee, may not be protected by the privilege.

If an accident investigation was conducted by a vessel officer or company employee without a reasonable anticipation of litigation, such as in a “near-miss” situation, and the investigation report contains damaging admissions, that report might be discoverable in a subsequent similar accident that did result in harm and lead to a lawsuit. Is there any way in which those damaging admissions can be protected from being discoverable or used by the other side to make its case? The answer is probably “no,” but I would enthusiastically recommend attempting to invoke the so-called “self-critical evaluation privilege” to try to protect the documents and materials from being discovered. This form of privilege, recognized in a few states under certain circumstances, is designed to solve the precise societal problem of how to encourage a company to conduct an objective and thorough investigation, thus possibly preventing future accidents, when the risk of creating harmful evidence against them would be a discouragement. The privilege was initially created to protect the hospital peer review system in which physicians consider the conduct or decisions of fellow physicians in order to make improvements to the quality of health care. The privilege has not been widely recognized, unfortunately. Many times, the reason given for failing to recognize the privilege is that an element of government compulsion of the investigation is not present. But not all jurisdictions require that the reports be made under government compulsion in order to be protected.

The federal courts have been reluctant to recognize the self-critical analysis privilege as a creature of the federal law itself. A federal court will, however, enforce a privilege recognized by a state. Most maritime cases are litigated in federal court, of course, and something called the “general maritime law” is deemed to be applicable to those cases at least as to matters of substance, unless modified by federal statutes passed by Congress. To the author’s knowledge, there is no well-established principle of general maritime law that recognizes the self-critical analysis privilege. Therefore, one’s best bet is to argue for the application of the privilege if it is recognized in the state in which the federal district court is sitting. Federal district judges are comfortable with applying the versions of the attorney-client privilege defined by the law of the state in which they sit, and such should be no different with respect to the state definition of the self-critical examination privilege. Therefore, when the case is brought in the state court of a state that recognizes the privilege, such as New Jersey, it should not be difficult to convince the court of the applicability of the privilege so long as the elements of the test are satisfied.

Finally, even though the general maritime law or the law of a particular state does not yet recognize the privilege, an attempt to create a change in the law should be made. After all, both the general maritime law and state law on privilege are forms of so called “common law,” which should evolve and grow to suit the needs of the society. And unless the issue is raised, a court will never be forced to make a decision. Some courageous judges may recognize the important policy goals behind the privilege and change the law because it is the right thing to do, despite the fact that other judges in his/her jurisdiction have not done so before. And unless you raise the point, you do not have an issue on appeal and the law will never be changed. 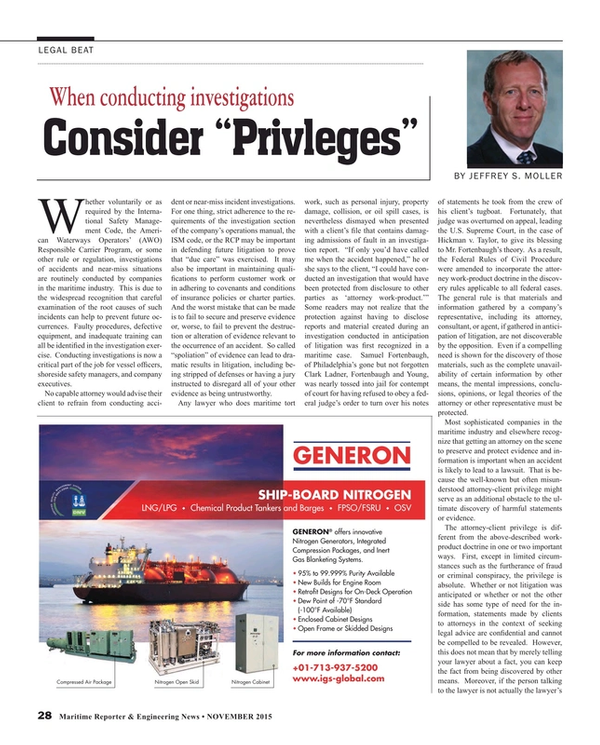