I have never been in a hurricane. That’s a fact. Actually, my wife likes to say that whenever there is any kind of natural disaster, I’m typically nowhere to be found. And, when I think about it, I realize that she is right. Whether by accident or by design, that’s exactly how it has played out during the 30+ years that we have been together. Whenever this touchy subject does come up – typically once a quarter – she usually points to one particular event as proof of concept.

In August of 1983, long before Katrina left her indelible mark on the U.S. Gulf Coast and the city of New Orleans in particular, there was Alicia. On August 18 of that year, the storm – the only major event of that hurricane season – plowed ashore into Galveston and Houston, causing billions of dollars in damage, flooding and along the way, took the lives of more than 20 unfortunate souls. At the time, I called Houston home. I was also shipping out for a U.S.-based oil and refining company. My wife – then my girlfriend – rode out Alicia hunkered down in her south Houston apartment. Me? I was at sea in the middle of a 60-day rotation, sailing as Second Mate on a coastwise chemical tanker.

The Gathering Storm
As the storm approached the coast (weeks later, my girlfriend told me all about it in no uncertain terms), she had gone out and bought some beer, bread and butter (the three crucial “B’s” of any competent hurricane preparation), the last three ‘C’ cell batteries left in the Bayou City, loaded up her only flashlight, and dutifully sterilized the bathtub and filled it with tap water, in anticipation of the inevitable loss of power, gas and water which was sure to follow. This “wasn’t her first rodeo,” she deadpanned. And, just as Dr. Neil Frank had promised from the National Weather Center, Alicia roared ashore with a vengeance.

For the first part of the storm, my girlfriend did, I suppose, what everyone else was doing at that point: she cracked a brew and watched the storm unfold outside her living room window. And then, just as suddenly as it had come, it was gone. Or so she thought. She marveled at the clear sky suddenly overhead before realizing she was probably directly in the eye of the storm. She was. Although weaker now, the storm picked up again and she watched the storm further – that is, until the plate glass window in the living room began to visibly flex and “bow” under the changing and rapidly accelerating pressures.

At this point, she wisely and quickly retreated to the safe room of her bathroom to sit next to the bathtub full of water, listening to the wind scream into the face of the building. The rest is history. She has since forgiven me for not being there in her time of need. I also had a hurricane story to tell; albeit one which had much less of a story line.

Safely at Sea
I had signed onto my regular vessel, a single skin, 600-ft. chemical carrier, on July 21. Typically, we would load in Beaumont, Texas, and then proceed around the Florida Keys to discharge dribs and drabs of product, gasolines, chemicals, lubes and other nasty cargoes at as many as six discharge ports on a given voyage. All the way back in ballast, we would clean all tanks. Typically a two-week round trip, you would endure four voyages in your usual work cycle. In mid-August of that year, we were headed back in ballast for the U.S. Gulf Coast.

Modern communications in 1983 did not include cellular telephones, or for that matter, SATCOM. Sure, we had a weather facsimile on board which would, at unpredictable intervals, spit out a damp, blurry, magenta inked weather map. Otherwise, ship-to-shore communications consisted of telex messages delivered by Sparky and/or a garbled conversation (think: fingernails on the blackboard) with station WOO out of Mobile, Alabama. In any event, and having stopped once on the way south, we were generally aware of what was about to happen in the Western Gulf, but beyond that, we didn’t know much. With last lines cast off, away we went. Meanwhile, Alicia was approaching the U.S. Gulf Coast.

The way I remember it, and on the following day, I had the noon to four watch on the bridge, where, with my nose pressed up against the porthole glass, I could watch the Chief Mate breaking a sweat with the pumpman as they cleaned, stripped and gas-freed one tank after another. It was a beautiful day and I was bored to tears. After a while, however, the Captain thumped his way up the stairs to the bridge. I quickly lurched myself out of his chair and ducked out onto the port wing before he could chew me out. A minute later, the helmsman stuck his head outside and said, “The Old Man wants to see you.”

I popped back in and he barked at me, “We’re slowing down.” I looked at him dumbly for a minute and replied brilliantly, “What?” At this point, he shook his head, sighed and rang up the Engine Room himself. For the next 12 hours or so, we ran on reduced RPMs and the total trip – according to my navigation records (and yes, I kept them and still have them) – took about nine hours more than it should have. Eventually, we chugged into Beaumont, which was spared, I think, the brunt of the storm. Two more round trips and I headed home to pick up the pieces. When I got to Houston, I discovered that we had lost an enormous pecan tree in the front yard, one which had miraculously missed the house when it came crashing down.

Sea Stories
Having sailed for just a little less than six years, I don’t have too many exciting sea stories to tell. And, that’s just fine. The worst weather that I can ever remember was a little storm that we encountered on that same chemical tanker, on another voyage, headed south and coming around Hatteras in ballast. The waves and swells were pretty big (in my humble opinion), the wind was blowing pretty good, and on a couple of occasions during my watch, we buried the bow when we caught a wave at the wrong moment.

It was all a bit scary, waiting for the bow to come back up and then watching that green water cascade off the focs’le and forward decks. I also admit to being a bit ‘green’ hanging onto to the engine order telegraph for dear life. The vessel was a 41-year-old, jumboized tanker, long-in-the-tooth and she looked it. Complete with an old-style midship forward house, I can assure you that the vessel would creak, ‘bend’ and flex in certain conditions. For example, if you loaded it slightly wrong – too much weight on either end or too much in the middle, some of the doors in the officer’s passageway didn’t close correctly until the condition had been remedied.

Nevertheless, the Old Man didn’t seem at all bothered by the storm, sitting impassively; chain smoking in his chair and watching it unfold. This, despite the blue haze of cigarette smoke wafting all around me, gave me some comfort. We lurched our way down the coast, and I know that two consecutive half-hour Loran fixes showed us actually going backwards. All of it, child’s play for the career mariner, I am quite sure.

Circling back on Alicia and our slightly delayed ballast voyage to Beaumont during the month of August 1983, I was glad to have missed all the excitement in the Houston area. That said; the Master of that vessel wasn’t in the habit of discussing his decisions or voyage orders with me. To this day, I honestly don’t know what went into any voyage planning in mid-August of 1983. Perhaps the office folks were pulling the strings, or maybe this guy – an experienced mariner – decided what to do all on his own. I’ll never know. What I do know is that we weren’t anywhere near that storm, and someone made sure we didn’t get any closer. Good enough.

Defining Risk: Then, and Now
In 1983, STCW was merely an abstract concept that people maybe talked about but certainly, it hadn’t (yet) impacted shipboard operations. In those days, you sat for and passed your license exam, renewed your Radar endorsement, took the blinking light test and you were good to go. I certainly don’t remember ‘voyage planning’ and certainly, the idea of Bridge Resource Management (BRM) had never once entered my train of thought; at sea or ashore. But, in 1983, the risks were largely the same as we might still encounter in 2015.

At sea in August of 1983, risk management – if there was such a lofty thing at that time within our modest two-ship fleet – should have factored in the reality that our scruffy coastal tanker was 41 years old. Again, I have no idea if that was the case. My primary job function(s) consisted of navigational bridge watches, correcting charts and stripping tanks during cargo transfers. I guess they didn’t think I needed to know anything else.

Risk management in today’s maritime nomenclature includes so many variables. Sophisticated weather routing, voyage planning, top-notch ship-to-shore communications, the endless training mandated by STCW, the U.S. Coast Guard, and on and on. Today’s mariners face, in many companies, regular simulation “competency assessments.” Those in line for promotion to that coveted Master’s position are handed an airplane ticket and told to travel to a reputable maritime training school, where a team of consultants will assess their “competency.”

For all the advancements in technology, the tenfold increase in training requirements and regulatory oversight, the same risks that presented in 1983 still exist today. And, the same accidents continue to happen. Thirty two years from now, I’m pretty sure those risks will look a lot like the ones we see today. Are we any safer? The recently retired President of the Massachusetts Maritime Academy, ADM Rick Gurnon, told me not too long ago, “There is no hard evidence that all the STCW training now required has resulted in any measurable increases in safety.” He could well be right.

Risk Management is all about informed decisions. Today, these decisions take the shape of many things, impacted by myriad variables. It might involve deciding how and when to best transit across pirate-infested waters or perhaps, plotting the safest possible course of a deep draft, 40+ year old vessel in close proximity of a gathering storm. Dozens of other decisions, just like those described above, are no less important. I myself prefer to stay out of the eye of any storm – real, imagined or metaphorical. And, that’s just what I intend to do.


(As published in the November 2015 edition of Maritime Reporter & Engineering News - http://magazines.marinelink.com/Magazines/MaritimeReporter) 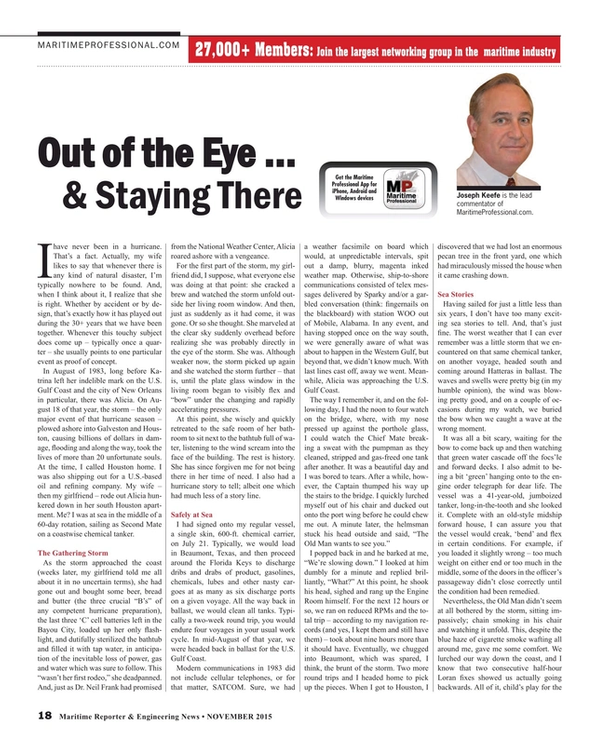 Read Out of the Eye ... & Staying There in Pdf, Flash or Html5 edition of November 2015 Maritime Reporter