A highlight of Thrustmaster’s efforts to safeguard its Z-Drive thrusters for towboats operating in the inland waterways are the inclusion of a built-in mechanical fuse or quick release coupling. (Pictured below is torque limiting coupling general assembly drawing and a picture.) The inclusion of a quick release coupling at the input shaft of the Z-drive gives operators added protection from the inevitable debris that can line the riverbed. The quick release coupling acts as a mechanical fuse whenever the drive line is blocked, for example should the propeller ingest a log, a tire or other river waste that is typical during daily operations. After the obstruction is removed from the propeller, the mechanical fuse can quickly be reset manually. The mechanical fuse, also called a torque limiting coupling, is a component installed on the horizontal input shaft of the Z-drive and connects to the cardan shaft driven off of the engine or electric motor.
The concept behind the quick release coupling is that when the propeller or gear set and/or drive line sees any spike in torque above the set limit for the coupling, the coupling instantaneously breaks free allowing the cardan shaft and engine to spin freely without driving the thruster. The propeller and gear set are instantaneously disconnected from the engine saving the propeller, gear sets, and bearings, from damage or complete failure. Therefore, not only avoiding the damage, but also operational downtime, unnecessary dry-docking, and crippling cost of repairs typically associated with the competitions’ thruster run-ins with the inevitable debris.
The quick release coupling is a standard component on Thrustmaster’s line of Z drives. 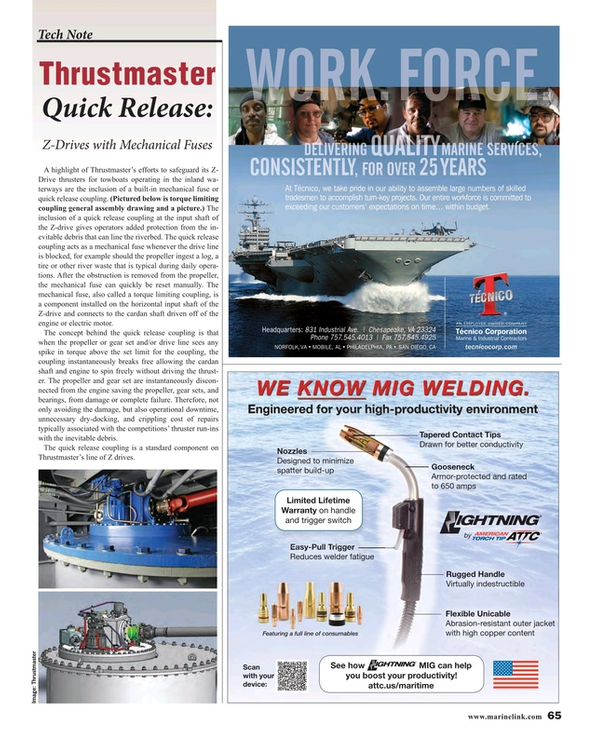