One may have all kinds of maritime clusters, depending on the criteria which have been originally selected to create such or such cluster. Some gather maritime professionals who belong to the same geographical areas, some other are based on the type of activity (for instance a cluster of maritime entities active in maritime research & innovation; or in shipbuilding/ship repairs/equipment; or in any other field where maritime professionals want to coordinate and harmonize some of their actions, work, lobbying etc…). But a National maritime cluster – in our view at least – should gather most of the maritime activities of its country, and act at the service of the national maritime economy, especially through pushing initiatives which are transversal (ie gathering various different maritime activities) and are meant to reinforce the strength of the corresponding maritime community at large.

What is the ENMC?
Today the ENMC gathers the national maritime clusters of Belgian, Bulgaria, Denmark, Finland, France, Germany, Iceland, Ireland, Italy, Luxembourg, Netherlands, Norway, Poland, Portugal, Spain, Sweden, UK, whereas Malta (headed by former Commmissioner Joe Borg) will officially join in October. Knowing that a few of them have a different name, like for instance the Federazione del Mare in Italy or the Forum Oceano in Portugal…
It will take a few years (maybe five or more) to really unify the national maritime clusters of the ENMC into a unique harmonized and homogeneous organization. Indeed the existing national clusters – from Eastern Europe to Northern and/or Southern Europe are sometimes very different the ones from the others: differences in history, culture, or even nature (some are totally private, others are indirectly State-controlled, or half private-public). Differences also in maturity: some are very young, just emerging, while some others are quite experienced. This being said the ENMC already acts sufficiently efficiently to have identified very important common fights which it is leading with the support of all its members.  For instance, after a few years of struggle we obtained together, from the Commission, the human and financial means necessary to identify and study what really represents the maritime European economy, what are its strengths, its weaknesses(this in order to boost the blue economy ie have the basis for any powerful concrete combined transnational policies).
What is ENMC Currently Doing?
It is also in that spirit that the ENMC recently discussed, with Commissioner Karmenu Vella about the place of the maritime economy in the Juncker Plan, or about the priorities which should be retained on a mid-term basis in the working-plan of DGMare, and also about the main specs of the European data-base that we need. We also insisted on the necessity, for maritime EU, to act at world level, to push towards universal rules, and as a consequence to reinforce the influence, role, weight and means of the International Maritime Organization. In our view Europe should “act regional” only in extreme cases (ie when IMO is too slow, or urgent needs appear), and should always bear in mind EU’s duty to secure together sustainable maritime development and fair competition averywhere (ie not jeopardize European maritime economy).
It is important to understand that if the ENMC lobbies, it is not a professional lobbyist! This is more than just a “nuance,” and is not contradictory at all.  Because the ENMC lobbies at the service of the European maritime general interest, not for itself. And it is not paid (neither directly nor indirectly) or its lobbying action. An action which we prefer qualify as a permanent, firm, open and constructive dialogue with concerned authorities. And it is worth mentioning that in most of “our” countries the bulk of national cluster funding is coming only or mainly from the annual contributions of the members (although some may accept non-binding subsidies), but not from the sale of their services.
Which Priorities?
As for the political and financial priorities let’s say that ENMC’s job is to be as opportunistic as possible, ie. they may either vary depending on the issues and challenges which the European maritime world is facing, and/or on the financial tools which may be available at European Union level (for instance the Juncker plan). This being said we are very alert on two aspects: one is that long term challenges and chances of maritime Europe, supposing active co-operations and heavy investments, are tackled as seriously as possible (such as H2020 program); the other one is that the existing rules and funding programs of the Commission are adapted to the various maritime challenges. But this is very complicated and in any case it has first to be handled by the various professional federations at Brussels level (which are more legitimate since they gather the maritime professionals of the maritime activities themselves, and which ENMC can support if and when they want).
And, again and again, the ENMC is maintaining its pressure on a few more general fights (on top of the neutral identification of what represents the European maritime sector as a whole: facts and figures, per country, per activity and which complementarities). These are the allocation of sufficient available resources to the most promising activities on a long term basis (biotechnologies, deep-sea mining, new energies etc…); and last but certainly not least the clarification and improvement of the too long and complicated decision making process at EU level (ie in Brussels, where the various directorates involved in the maritime fields are more often competing than co-operating, thereby not helping to reach the most efficient decisions; whilst many rules are far too stringent, not adapted and lead too often to inappropriate or negative conclusions, and knowing that the weight and controlling capacity of the European Parliament often reveals to be insufficient).
The Author
A reputable shipowner for 32 years, F.Vallat chaired the” Institut Français de la Mer “for 10 years. He created both the “Cluster Maritime Français,” and the “European Network of Maritime Clusters” which he chairs to-day. He also chairs “Euromaritime” (the European maritime business show). He has represented France at the “European Maritime Safety Agency” (and has been vice-chairman from 2002 to 2008)
(As published in the August 2016 edition of Maritime Reporter & Engineering News) 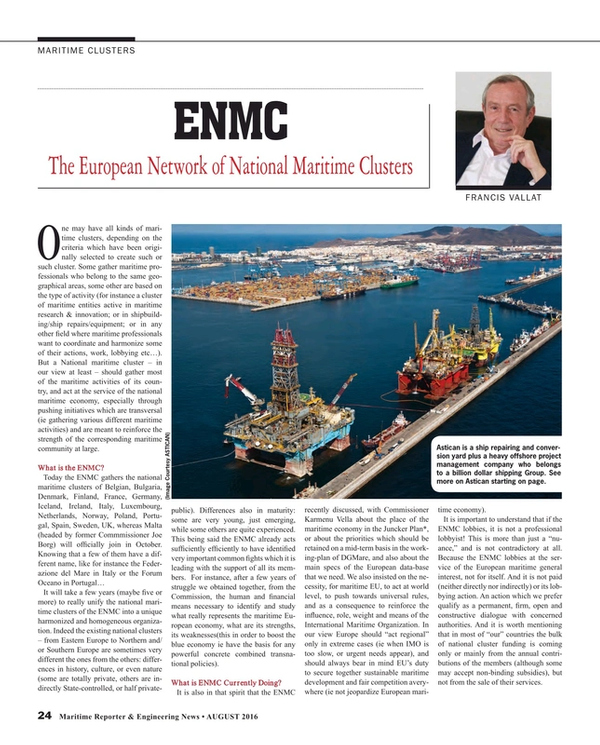