The Past, Present & Future of the ‘Noon Report’

Virtually every shipping company today uses noon reports to understand and monitor what is happening on their ships. These reports are traditionally sent by the Captain every day, based on data gathered manually by the crew. The content and format of the report is usually pre-agreed by the company and sent at noon. The noon report has grown over the years to give a snapshot of what has happened on board the ship since the previous noon i.e., in the last 24 hours.

Since the time between noons is based on the time kept by the ship, this is not always 24 hours. The time kept by the ship is changed by the crew depending on which time zone she is operating in. Therefore a ship sailing westward gains time, which means when the clocks are adjusted on board, the time to the next noon is now 25 hours. Likewise, for a ship sailing eastward the time between the two noons ends up being only 23 hours.
For a ship on a voyage of several days, the data received from noon reports is not easily comparable as the data sample every day along the voyage is different based on whether the ship’s time was changed by the crew or not. In addition, the managers that monitor these reports ashore, receive them at different times of the day and night as the ships change time zones. This means that the companies do not know in real time what every ship is up to.
One would wonder why the entire shipping industry would lay the foundation of ship monitoring and reporting based on a moving target, i.e. ship’s noon time which varies based on the ship’s location. The reason GMT has not been picked as the accepted standard for timekeeping is perhaps because the industry is steeped in tradition or may be even linked to the origins of the noon report.
Historically, the only time the ship accurately knew its position in the open ocean was at noon every day. At all other times the position of the ship was based on an estimated calculation (also known as Dead Reckoning) from the previously determined position. To determine the accurate position of the ship, the officer on watch, used the sextant and the chronometer to calculate the longitude in the morning and the latitude at noon. It was important to determine the position of the ship to know what course to steer. Gradually with better communication and an advantage in knowing the best ETA, reporting the latest position of ship became a practice and hence the story of the noon report began. The initially noon position reports were sent over telex and radio. Today some noon reports have become so elaborate that it takes the designated crew several hours (from morning to noon) to collate all the data required from different areas of the ship, i.e. cargo control rooms, engine rooms, bridge, etc. However, what started and evolved as an innocent position report has slowly but steadily become a monster – with various formats of noon reports being provided to not just ship owners and managers, but also charterers, sub-charterers, weather providers, ports and terminals, oil majors, commodity traders, agents, etc. to name a few.
Adopting GMT as the standard time for all reporting, would in today’s global era, certainly make life a lot less complicated. Unlike in the past where accurate position was known only at ship’s noon, today the GPS position is available throughout the day. With modern communication systems and real-time data collection platforms, it no longer makes sense to continue noon reporting. Real time access to on-board data will not only provide companies the status of vessels at any given time and more importantly at the time of need, but also free the crew to deal with the actual task of operating the vessel efficiently in today’s minimum manning environment.
To ensure the efficiency of the larger global supply chain (in which shipping plays a significant part), it is likely that a single unified time will eventually evolve to be the norm. There is no question that early movers will have substantial edge over their rivals when they can show greater efficiency and control of operations. It remains to be seen as to who is courageous enough to break with perhaps a 100 year tradition and bin the noon report in its current form. This in itself will be a giant leap for an industry that is known for being reactive instead of proactive in embracing change.
The Author
Melvin Mathews is an MBA graduate and Ex-Master Mariner with over 20 years of experience in the maritime industry, previously serving as a Captain on vessels ranging from coastal ships to VLCC’s. He is an Associate Fellow of the Nautical Institute and fellow of IMarEST. Melvin’s extensive travel and working in several countries has broadened his expertise and understanding of operating in multicultural and multilingual environments. He has extensive business and consultancy experience and shouldered Risk-assessment and Risk-management initiatives at a senior level. He is a certified nautical lecturer and has been involved in Maritime & Competency training.
(As published in the August 2016 edition of Maritime Reporter & Engineering News) 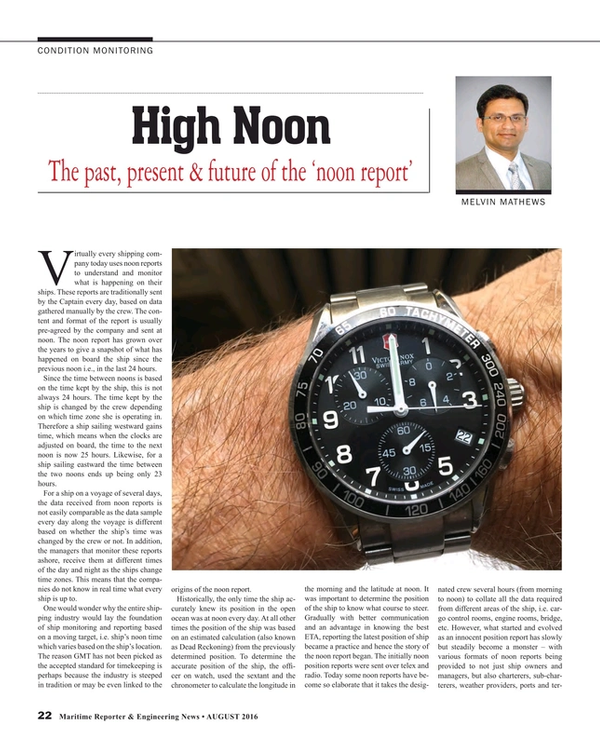 Read The Past, Present & Future of the ‘Noon Report’ in Pdf, Flash or Html5 edition of August 2016 Maritime Reporter