“An ounce of prevention is worth a pound of cure.” – Henry de Bracton, DeLegibus, ~1240

Often clients or prospective clients come to me with a commercial contract issue perched on the precipice of full-blown litigation or arbitration. When I ask to see the contract, often times I see errors in drafting that either (1) give rise to the problem before me or (2) could create a bigger problem for the client in the future.

The risk of drafting error is higher for Europeans looking to contract with American companies. While all the parties to the transaction may speak the same language, the legal language (and precedent) is vastly different from Europe to the United States. What follows are five common mistakes I see in maritime contracts in my practice.

Mistake #1 – Not Adequately Specifying the Applicable Law
The General Maritime Law of the United States (“GML”) – the body of judge-made case law from the U.S. Federal Courts – as well as a litany of federal statutes govern most maritime matters in the United States.  But, if the Supreme Court of the United States (“SCOTUS”) has not issued a decision on an issue, the 13 different Federal Courts of Appeal (each covering a geographic region of the country) have the power to make rules that apply only in their jurisdiction.  When these courts disagree, what is known as a circuit split exists – and sometimes SCOTUS will resolve it, other times the rules will vary from New York to Texas to California.

Additionally, the SCOTUS decision in Wilburn Boat in 1955  determined if the GML is silent, state law can “fill in the gaps.”  So, on top of the federal precedent, certain decisions from individual state courts or state statutory laws can supplement the GML.

And, there are some federal statues, such as the Outer Continental Shelf Lands Act (“OCSLA”)  that extend concurrent jurisdiction for state and federal courts, and, depending on the activity, can actually force state law to supplant the GML.

Obviously, this overlay of what law applies (and the situations in which it applies) is vastly different than what is present in Europe. A good choice of law clause can help the parties avoid most, but not all, of the issues related to which law applies.

Mistake #2 – Not Specifying the Forum/Method of Dispute Resolution

The second problem area ties directly into the first – many maritime contracts lack either a forum selection clause (picking the location of the litigation)  or an arbitration clause, which are normally favored in commercial and passenger disputes  but are less available in the case of injured workers. SCOTUS has repeatedly held both of these types of clauses to be generally acceptable in a maritime contract.

A forum selection clause is usually a good idea if the parties don’t want to arbitrate, as it fixes the location of the lawsuit. Depending on how the clause is phrased and the nature of the dispute, the parties could avoid state court entirely, and also waive the right to a trial by jury.

In an international agreement, many parties favor arbitration clauses. There are advantages to arbitration such as limitations on discovery and, in the case of parties from different countries, it is easier to enforce an arbitration award than to domesticate a foreign judgment.

A corollary issue is the use of permissive language instead of mandatory language. I see this often in dispute resolution clauses that are not drafted by trial attorneys, but instead by transactional attorneys. If the language is not sufficient, the clause is merely optional, and an aggrieved party can sue anywhere where they may be able to establish jurisdiction.

Mistake #3 – Failure to Launch on Indemnity

Many times, especially in a master service agreement context, parties will agree to reciprocally defend and indemnify each other for certain types of claims or situations.  However, a failure to understand (1) where the contract will be performed and (2) the applicable law resulting therefrom can nullify what would otherwise be a valid indemnity agreement. Two examples of state statutes that can nullify such agreements are the Louisiana Oilfield Anti-Indemnity Act and the Texas Anti-Indemnity Act, especially if OCSLA applies to the contract. Depending on the circumstances, the parties may not be able to contract around these state laws with a choice of law clause. However, creative language does exist that can reduce the chances of a state law invalidating an otherwise acceptable indemnity agreement.

Mistake #4 – Not Addressing Limits on Liability

The GML as well as state law allow for limitations on damages, especially in commercial contracts. Many times, I see poorly drafted damage waivers that will either not survive judicial scrutiny or don’t offer the protection the parties believe.

An example is the $500 package limitation in the Carriage of Good by Sea Act.   While COGSA applies by default, parties can work around the package limitation either by (a) defining a package and the package value in the bill of lading and/or (b) excluding the application of COGSA from the transaction in the contract at issue. However, reliance on old forms will likely not provide the limited exposure sought by the parties.

Mistake #5 – Fine Print Waivers or Indemnity Clauses
In the late 1970s and 1980s, the rock band Van Halen had a clause in a technical rider to the band’s contracts with concert venues whereby 1) the arena had to provide a bowl of M&M candies at sound check with 2) all brown M&Ms removed. This seems like typical rock star/diva behavior. However, National Public Radio reported in 2012 that Van Halen used this language to make sure the arenas and venues read the fine print in the contract on the technical specifications needed for Van Halen’s equipment and stage set up.   Brown M&Ms in the candy bowl meant the venue had not read the contract, and there would be far bigger problems with the set up and safety.

Along these same lines, I often see a huge drafting error: defense and indemnity clauses or limitation of liability clauses are in the same typeface/font/size as the rest of the contract. Most U.S. jurisdictions, as well as the GML, require that an indemnity agreement be “specific and conspicuous.”

The easiest way to fix this is to use a completely different font, and font size.

And, the lack of a specific or conspicuous indemnity clause can, like the presence of a brown M&M in a dressing room, be an indicator of far greater problems with the contract at hand.

I appreciate the need for businesses to reduce cost. I also appreciate the need not to reinvent the wheel. However, failing to use a knowledgeable admiralty or maritime attorney on the front end of a transaction, either with assistance in contract negotiation and/or drafting/reviewing the same can and often does lead to a much larger cost on the back end, when something goes wrong and litigation or an arbitration arises.

F. Daniel Knight is a Shareholder at Chamberlain Hrdlicka in Houston, Texas, practicing Admiralty, Maritime, and Energy law, as well as commercial and civil litigation. Follow him on Twitter @MaritimeProctor. 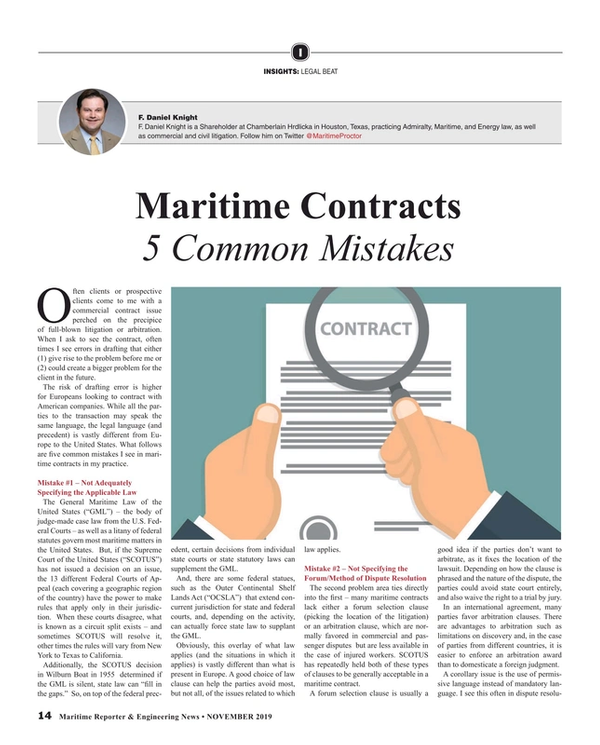