The environment in oil patches onshore and offshore alike has been challenging throughout 2019; worries about an economic slowdown – whether cyclical or induced by a trade war – have weighed heavily on oil prices, even in the face of reduced production by the big producers. Though storm clouds persist, there appears a clearing on the horizon.

The fate of Offshore Service Vessels (OSVs) is, naturally, closely tied to the price of oil. Seacor Marine’s John Gellert, in reviewing its Q2 results, said: “Activity levels in the U.S. Gulf of Mexico remain tepid as customer demand is highly sensitive to oil and gas prices.” In spite of these efforts, and in the face of demand slowdowns, stockpiles of oil have continued to grow, as increases in demand have been minimal. Data from the International Energy Agency (IEA) showed OECD oil stockpiles approaching 3 billion barrels, down slightly from  the  record inventory levels following the 2014 – 2015 price plunge.

In mid-October IEA reduced its estimates of demand growth for the second month in a row, and said: “We expect growth in 2019 to be the weakest since 2016, following evidence of a slowdown in several major consuming regions and countries …”

At present, oil prices will not support large scale investment in new fields. Moving towards year-end, the forward price curves, starting with nearby months in the mid $50’s/barrel (basis WTI) are essentially downward sloping, with a slow glide down to around $50/barrel for positions two years out. Prices for Brent oil, slightly higher (with nearby at around $60/barrel) follow a similar pattern. Natural gas prices also remain near their long-term lows, with supply increasing from a raft of new landside production initiatives. Though the average full cycle costings for new projects in the U.S. Gulf of Mexico hovers just under $40/ barrel (basis a 2018 study conducted by IHS Markit for the Bureau of Ocean Energy Managment),  the top half of the cost dispersion reaches above $70/barrel suggesting that many projects would not see Final Investment Decisions.

Demand for OSVs and workboats in the oil patch begins with the underlying drilling activity which, in turn, flows from views of the broader oil markets going forward. The offshore drillers have seen the deleterious impacts of the difficult macro environment, and the lack of sentiment for a sustained demand driven upward turn in the prices for oil and gas. In mid-September, the unprecedented attack on Saudi oil facilities led to an initial price hike, but this was based on reduced supply, not on improving economic conditions. As predicted, the prices retreated as supply was quickly restored.  Indicative of geopolitical risks, oil markets saw temporary (but slight) jitters as an Iranian tanker sustained a missile attack in the Red Sea a month later. At the same time, by mid-October, Saudi production was back on track. Not surprisingly, listed drilling entities, and many of the service providers, continued to see their shares trading at multi-year lows. 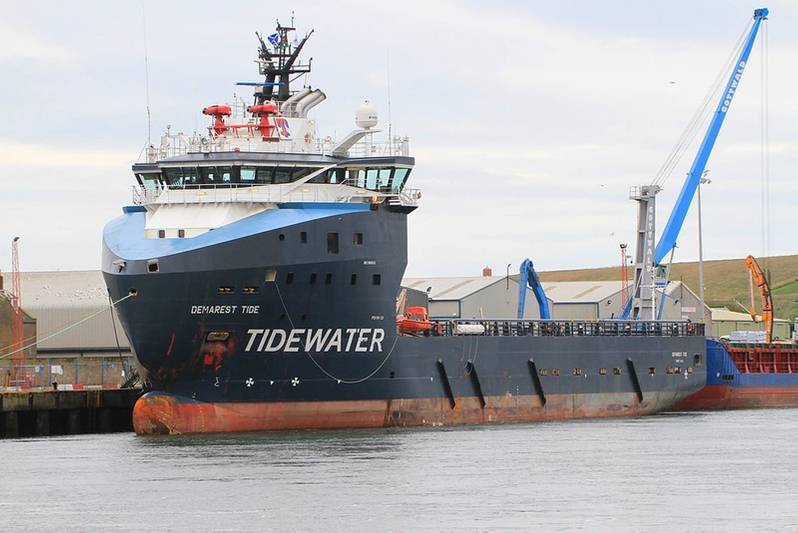 Consultants McKinsey & Company, in a mid-2019 report, offered that: “2019’s market started with some of the lowest activity levels seen in 20 years, with rig demand about 3 to 4 percent lower than it was in 2017. In that same vein, operators have not increased offshore exploration capital expenditures. Although some premium rigs have been reactivated recently, we anticipate that the market will be slow to recover.”
Rystad Energy, in a 2019 report on the U.S. Gulf of Mexico, explained to clients that: “After 2015, the offshore rig market in the U.S. witnessed an unprecedented shift, with the pendulum swinging from the long-standing dominance of jack-up activity in shallow waters, to becoming predominantly a market for mid-water and deepwater floaters.” On an early summer Evercore ISI podcast, Transocean (NYSE: RIG) Senior Vice President  Roddie Mackenzie, looking for an uptick in 2020 and 2021 with continued momentum in the U.S. Gulf of Mexico, stressed the new openings for independent oil companies (IOCs) in Brazil and in Mexico.

Looking into the future, as the focus of non-national oil companies moves into deeper waters, the McKinsey consultants see continued scrappage of jack-ups, against the backdrop of annual demand growth at 1%. In a discussion of demand for “floaters” beyond 2019, the consultants are saying:  “… growth—to the tune of 6 percent per annum between 2019 and 2027, is expected to follow. Key growth regions will be Africa, Brazil, and the Gulf of Mexico…”  By mid-2019, there were signs of life. Consultants Westwood Global Energy wrote, in a briefing, “High-impact exploration drilling activity increased substantially in the first half of 2019 with 51 exploration wells completed, compared to 36 in the same period in 2018.” They identify Guyana as an important offshore region.

For the operators of the OSVs, staying afloat, and following the money comes down to riding those trends (to deeper waters), while at the same time exercising “discipline”- which means not reactivating “stacked” vessels in response to short term price blips and, rather, considering longer term sentiments. A reckoning in an early September 2019 conference presentation by Tidewater (NYSE: TDW) reveals a total industry supply of 3,419 vessels, roughly evenly divided between anchor handlers and platform supply boats.

Within these fleets, roughly 1,000 are classified as “stacked” with a little under 300 described as “idle”. More telling are the approximately 650 (in the stacked category) laid up for more than two years. Within these, 360 units are more than 15 years old.

Financiers also note the overhang of older oil service vessels in the marketplace. Speaking at Capital Link’s Ship Finance Forum at London International Shipping Week, Kevin O’Hara, from AMA Capital Partners said that “…offshore is in much worse shape…” than other segments of shipping. We have not seen the amount of assets reduce at all … we’ve seen sales of fleets … when the vessels are sold, none of them go for scrap.” For Tidewater (with a clean balance sheet following its mid-2017 emergence from bankruptcy, and  an industry topping fleet of 198 OSVs following its subsequent acquisition of GulfMark International), its prospects are brightening.  Its presentation notes that 57% of revenues are derived from deepwater units, and that dayrates for high spec OSVs are rising. In North Sea, where  21 Tidewater units are operating, its slide deck points to a near doubling of day rates for large PSV’s from $7,400/day up to nearly $14,500/day (with similar, though less dramatic upticks in the U.S. Gulf and in  West African waters).

Large peers have faced rough currents. The parent company of Bourbon Marine Logistics, second in the vessel count with approximately 175 OSVs (part of a much larger fleet of nearly 500 vessels), had filed for “reorganization” in late July, after lengthy efforts to reach accommodations with its lenders.  Its daily business will continue while discussions are underway to re-jigger its debt obligations and payments; it will continue to implement a bold strategic plan dubbed BOURBONINMOTION, where smart technology deployment will ultimately lead to manpower savings. The reorganization is a moving target; in early October, the group said that it had received a purchase offer from a “company owned by a group of French banks.” 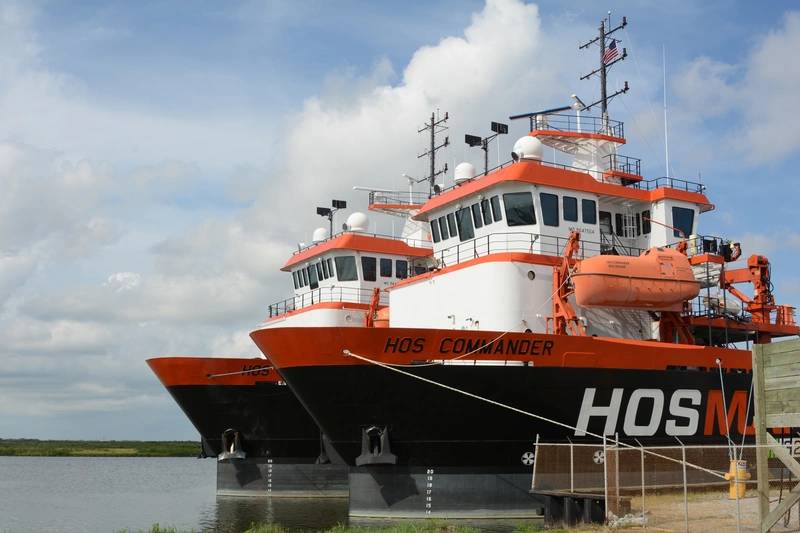 The pickup in areas identified by McKinsey may benefit the U.S. outfits.

Todd Hornbeck, on his company’s Q2 conference call, brought the high level focus down to specifics, describing fresh activity “…not just in the Gulf of Mexico, Brazil, the whole Northern Coast of South America, Mexico, this whole hemisphere is really starting to be able to point to actual demand drivers when they are coming in, the companies that we service are making announcements that they are doing new projects. “

Tidewater’s activity in West Africa encompassed 50 units (more than the 15 operating in the U.S. GOM). Mexico, where Hornbeck Offshore Services (NYSE: HOS) has a large fleet working the Bay of Campeche,  also saw Tidewater operating 13 vessels.  Brokers Bassoe had noted that (in contrast to the U.S. trend), “Mexico has become a key region for jack-ups again.”

Privately held Edison Chouest, active in the GOM (working closely with multiple oil “majors”), also maintains a large presence in Brazil, another area pegged for a possible rebound.   Guyana has attracted attention as exploration has ramped up in the face of recent discoveries; active in the area since 2016 (with nearly a dozen vessels working), Edison Chouest, working for Exxon Mobil, established an office there late last year.
Beyond the Americas, operators in the North Sea are seeing a stronger market.

Seabrokers (with offices in Stavanger, Aberdeen and Brazil), in their October market report, point to average utilization in the North Sea of 78% for large Platform Supply vessels, 66% for medium size Anchor Handlers, and 61% for large Anchor Handlers, which were seeing dayrates just above $40,500, more than double those of a year earlier. As contrast, Seacor pegged its Q2 fleet utilization in the U.S. Gulf at 34%, well below its overall measure- at 72%.

The tide may be turning, with the statistics beginning to bear out the optimism of Todd Hornbeck and others. Evercore ISI’s James West, a long-time analyst of listed companies, explained to investors in the rigs which drive demand for OSVs, in a late September briefing, “We believe 2020 will be the ‘Year of Acceleration’ for offshore rig utilization and dayrates. The marketed utilization for both jackups and floaters has climbed above 80%, and jackup dayrates are moving solidly higher across all regions. The acceleration, if that’s what happens, will flow through to workboats serving those rigs. The gradual drift of oil production to deeper waters gives rise to higher demand for service vessels; in a presentation at Pareto Securities’ Offshore Conference, Tidewater noted: “In general, production support represents 45-55% of the demand for OSV’s. OSV intensity for production likely to increase due to complexity of field developments and distance from shore.” Todd Hornbeck summed up the dynamic: “We have to get stabilization through utilization first. You got to have the utilization and then we can start trending to higher rates.”  For now, it’s still a waiting game. 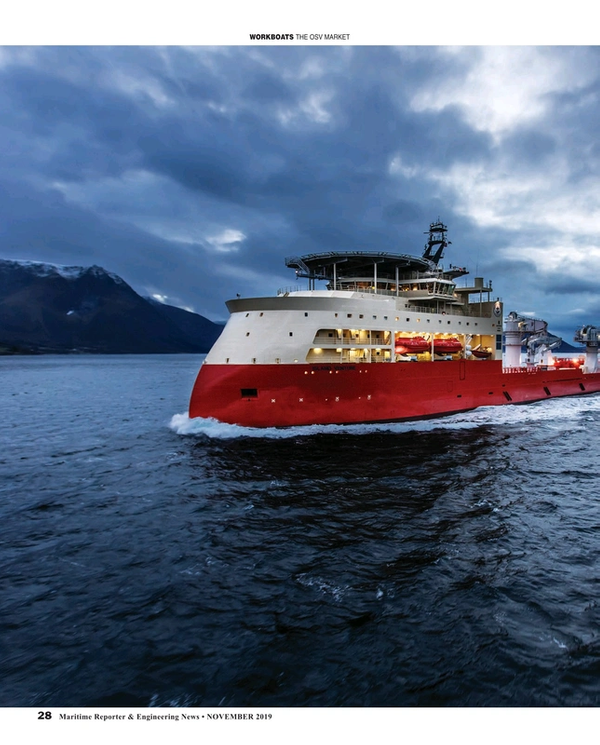