Will Moon was one of my very early engineering interns (and also helped me finish out the second story of my house decades ago). He has since moved to the West Coast and has worked for the naval architecture firm Glosten for quite a while now. On Marinelink.com I saw a quick flash of a foiling passenger ferry and the name Glosten and I contacted him for a closer look.

Will provided me with more information and this is one of those cases where I really like what I see. This is still an early concept that was developed with the designers and composites engineers at Bieker Boats, but it has a bunch of features that may be of real benefit in future ferries (and other work boats, such a crew boats) and opens a much larger discussion of what we want ferries to be like when we all grow up.

Foiling ferries have been around for decades (I actually interviewed for the Boeing Jetfoil program when I graduated college), but they never made it past a very tentative go.

From what I could see there were technology issues. The control systems were very expensive and difficult to design, the foils were expensive to manufacture, the most suitable materials were aluminum for the hulls and steel for the foils, there were few suitable powerplants and, most of all, the drive train could only be described as a bear (there are other terms I could use, but you get the drift).

In the last decades we have actually made a huge amount of progress in those departments and to get a ferry to foil is technically no longer so difficult.

Foiling math is fun, and it is now well established in the high-performance sailing world. Foilers do not operate with a large amount of hump drag and therefore they do not need a large amount of installed power to get over the hump. Once they get on foil, a well-designed foiler can burn as little as 50% of the fuel a catamaran burns. But that is only the beginning of the fun, a foiler has inherently low wake and is less affected by waves. The Glosten/Bieker design dials in on these advances in materials, controls, and propulsion. It also reaches back to an ancient planing hull design, a Seasled hull, which is just about perfect for a foiler like this. 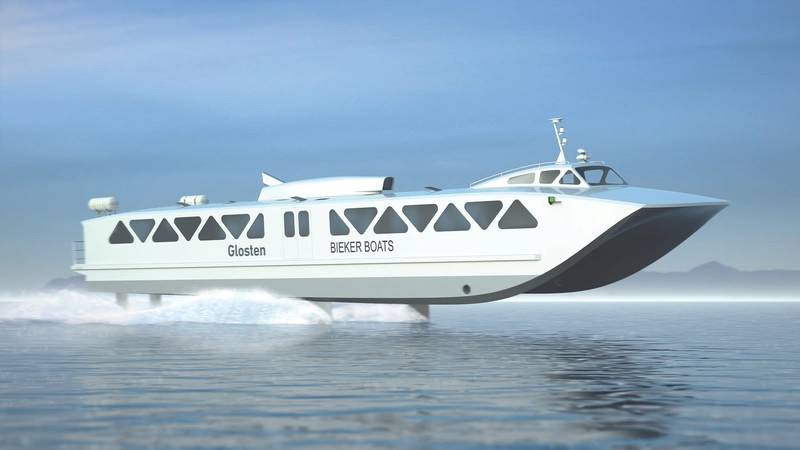 Ferries are always optimized for a run, so let’s look at this design for my favorite run; Atlantic Highlands to NYC. It is a great run for a ferry of this type. (But there may actually be less challenging runs out there in deep rivers, fjords and bays).  The ferry is a little small in today’s Atlantic Highlands traffic, but let’s make her an off-hour ferry, and use her for the lower density runs throughout the day, including a nice late night run that can get me home after a broadway show and a post-show drink.

In this application she will need retracting foils to deal with the shallow water depths at Atlantic Highlands. At present the bow foils do not retract, but Will tells me that can be changed rather easily.

If she has electric propulsion pods in her aft foil, they can simply be raised to provide sufficient bottom clearance.  If there are nice sleek off-the-shelf propulsion pods in the 250 kW range (I would like to use four and she is a 1000 kW boat) it could be even more interesting. Glosten suggests two 600kW generator units to deal with Tier 3 to Tier 4 issues, although, theoretically, a single engine would be even more efficient. Remarkably, battery electric propulsion is not out of the question. Remember, once power requirements go down, battery realities go up.

The Glosten design shows the engine at midship, Will tells me that is related to CG and foil lift proportioning issues. I know it is possible to refine that and I would insist on a stern mounted engine room. That would require only one sound proof bulkhead and result in a much better cabin with the added benefit of being able to use a zero deadrise seasled transom (more efficient lift, cheaper to build and a better engine room).

I would like her to be a bow loader (for one thing bow loaders do not get damaged as easily during docking and operators are cagey about composite ferries due to impact damage issues). It would need to be a nice aerodynamic bow loading arrangement that can interface with existing bow loading dock arrangements, but, again, that is related to inspired design and is not a deal breaker.

Configured that way, she can get into the shallow water ports, load passengers, accelerate to foils speed, do her 27 nautical mile run in occasionally rough water in less than an hour, and get me there in comfort and style, with reduced wake and fuel consumption. It sure would make me happy.

I am not saying it will be easy, more deep thinking will be required, such as seating to keep passengers safe in foil collisions, and interpretation of present rule restrictions for larger composite passenger ferries. At first glance there are no 250 kW permanent magnet off-the-shelf high speed propulsors, but based on a quick internet search I could be wrong; they may be out there though.

But even while we are waiting for those propulsors we can do further refinements, discuss USCG regulations, and have some fascinating hull structure discussions. For example, is this a 20 knot hull (which is the take off speed where she will no longer impact waves) or is it a 35 knot hull (in case she has a rough landing with a foil collision). I am sure that will also be solved; you can already see that some pretty slick composites designers have worked on this concept; forget about square windows, they are a waste of good structure, hence the truss sides to make this boat really light.

Proof of concept vessels are important. I know there are some wealthy people who commute to New York City by water, maybe they would be interested in a 1/3 scale commuter, no more worrying about big waves in a small boat. Spread the word. I like what I see on paper, I’d really like to see it in real life.

This article is published in the November 2019 edition of Maritime Reporter & Engineering News magazine. For each column I write, MREN has agreed to make a small donation to an organization of my choice. For this column I nominate 350.org, https://350.org/ one of the main international grass roots advocates for keeping atmospheric CO2 at 350 ppm. We have already exceeded that limit and it is not slowing down yet, but, as an engineer, I know we can do it. 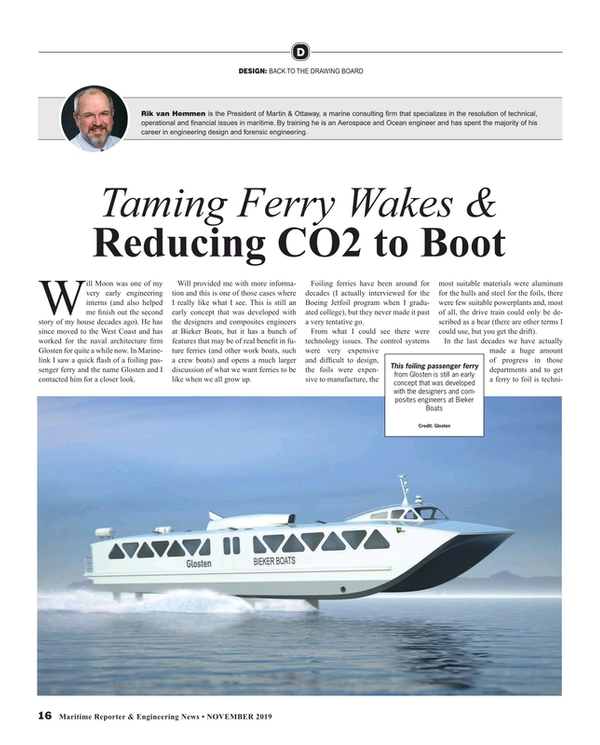