The story of Bordelon Marine is not far afield from many others in the Gulf of Mexico, that of a small, family owned business carving a niche for itself. But when Wes Bordelon joined his namesake company in 1999, he knew that change was essential for survival. More than a dozen years later, MarineNews sat in Bordelon Marine’s brand new shipyard in Houma, La., a month before the debut of its Stingray class of offshore service vessel, to discuss the renewed trajectory of the company in step with the changing demands in the market.

As Bordelon Marine sets to debut it luxury class of OSV – the 260-ft. Stingray class – the man who ultimately envisioned and drove the company to this historic mark could not have imagined the course of his life, his company, more than a decade ago. Bordelon Marine, which has been a familiar name in the Gulf of Mexico since Wes’ father started the company in 1980, had become a shell of itself by the late 1990s.
At the time, Wes Bordelon was carving a career for himself in the music industry in Chicago, and the notion of owning and operating boats was the furthest thing from his mind. But in deciding to move back to Louisiana in the late 1990s, Wes found that where he had roots is where he wanted to stay, and that rebuilding the business which bore his family name was indeed his future.
“I came out of the music industry, working for Interscope Records and Universal Records as an artist development and A&R representative in Chicago,” said Bordelon during a recent interview in his new Houma, La., shipyard. “Coming down here, I had no aspirations to be in the boat business, but after being here for a few months, I knew this is where I wanted to be and that this is what I wanted to do.”
What Wes Bordelon found upon his return was a company in dire need of rebuilding. At the time, the ‘fleet’ consisted solely of three 110-ft. utility vessels, with four people working in the main office and 30 mariners.
“You can’t effectively compete with only three out-of-date utility boats,” Bordelon said. So Bordelon embarked on its mission to build, not in a wild or speculative manner, but in a conservative and fiscally sound yet systematic way; a course that would prove prudent. When the world economy went into a collective nosedive in 2008/09, Bordelon Marine was financially strong, carrying no debt, and making plans to build a state-of-the-art shipyard to build its innovative new brand of OSV, the Stingray class.

A New Chapter
Before the shipyard in Houma was a proverbial twinkle in his eye, though, Wes Bordelon and his crew first set out on its mission assemble a larger fleet of boats with which to compete. First it built three DP1 150-ft. mini supply vessels at Bollinger in 2001, adding a pair of 170-ft. DP 1 newbuilds in 2005. In 2007 it acquired a small company that added four more to the fleet, and picked up another 140 foot vessel in 2008.  Today the fleet stands at 11 vessels, but that is only a fraction of the story.
“We grew conservatively and organically, with very limited debt,” said Bordelon. Bordelon four years ago envisioned the vertical integration of the company, a plan which centered on the construction of its own state-of-the-art shipyard building vessels to its own design, to its own level of quality and outfit. “We are branching off from that now, developing the new shipyard and the new Stingray series vessel, which is a much larger and more sophisticated vessel. (than we currently have in our fleet). We’re taking it to the next level, but we’re doing it within our own control.”
So the company that started in 1999 with three small utility boats and 34 employees, today includes 11 vessels and 300 employees (which includes 150 shipyard workers); due to grow to 14 vessels and 350 employees when the company delivers its trio of 260-ft. OSVs in the Stingray class.

Building the Vision
Vertical integration in industry is hardly a new concept, but a path Wes Bordelon has embarked upon with his company in the quest to position it for future growth and prosperity. Given the market at the time and the tough nature of the shipbuilding business, Bordelon’s plan to build now was met with more than a few raised eye brows.
“Four years ago, building the shipyard was a thought, a dream,” Bordelon said. “But when you’re in this business long enough you develop an appreciation for boats, and I’ve been in and around this industry long enough to know there are pros and cons. When I let people know that I wanted to be in the shipbuilding business, they thought I was crazy.” Crazy like a fox, as it turns out.
Wes Bordelon has a vision and developed a strategy to enter a niche in the offshore oil and gas sector that he felt was underserved. Building a shipyard was central to the mission. In the shipyard, Bordelon and his team are able to exercise a high degree of control and adaptation, to design and build the vessels that they want, the way they want them, when they need them. So the shipyard gives Bordelon a high degree of control on quality: one that could exist only with an high price tag when building at an outside yard. The manifestation of the strategy sits in the form of the 260-ft. Stingray class offshore service vessel, a vessel designed in concert with C. Fly Marine of Covington, La., and the first of which was in the process of being completed at press time. “Developing the Stingray was almost a two-year process to design and bring it to fruition,” Bordelon said. “We wanted to grow and develop a design that was unique, and cutting edge.”
Bordelon chose Houma as the home for the new shipbuilding venture based on the tried and true axiom of real estate: location, location, location.
“We wanted to be in Houma because it’s a good epicenter of support, there are many excellent service and support companies here, and a deep pool of quality workers,” Bordelon said.
So simultaneously, Bordelon was designing its new boat and building its new shipyard, no easy task by any metric. While shipyard design and outfitting is essential to efficient and quality production, anyone in the business knows that a shipyard is only as good as its workers, and in the regard Bordelon’s timing was just right to pick up a choice crew of experienced builders.
“One of the biggest challenges, of course, is at the same time (we’re working on the boat), we’re building a shipyard. Then you need to source experienced crew.” Bordelon  found fortune in a New Orleans misfortune, specifically just as Bordelon was building up, a New Orleans shipbuilding icon – Avondale –  was closing down. With this, Bordelon gained immediate access to entire crews of experienced technical workers as well as managers and supervisors. Highly trained people from day one that were experienced in building in a modular way.
So with an experienced shipyard crew and a brand new ship construction facility – one that was purpose built for the new Stingray class of boats, Bordelon and crew were set for the next phase: construction of the Stingray class.

Meet the Stingray
The first of three new Stingray class series 260-ft. DP2 PSV and MPSV – M/V Connor Bordelon – was expected for completion at press time.
“We are very excited to introduce the new Stingray DP-2 PSV and MPSV series,” said Bordelon. “The Stingray is a prototype design that incorporates a number of cutting edge features and capabilities, only commonly found in much larger new generation vessels. The concept here is to give our clients a more affordable MPSV or light IMR/ROV support vessel option.”
The Stingray class was designed to be an ROV support vessel, or a light IMR vessel, according to Bordelon. “It’s most ideal function would as a life of field deepwater production boat that has an ROV onboard and can conduct subsea intervention.”
Bordelon said that by design the Stingray class is a small vessel for that sector of the offshore market. We wanted to provide our clients with a more affordable option, but still have all of the power, cutting edge features – the automation, DP2, and the interior amenities – that you commonly only find on a much larger vessel.”
In analyzing the Stingray design, finish and potential use, Bordelon described it as such: “It is more of a Swiss Army Knife than a workhorse. You see a lot of 260s out there now that are in the 4000 to 4500 deadweight range, meaning it is a wider, and deeper vessel. These larger boats are designed to primarily move a lot of product. This is what I mean by a whorkhorse; we’re really not that king boat. We can still move the cargo, but the Stingray’s advantage comes in her accomodations, automation, and multi-purpose functionality.”
The 255 x 52x 18-ft. Stingray is more of a specialized support boat, with an innovative, thinner hull design to optimize speed and fuel consumption. While performance is the bottom line, according to Bordelon the comfort and amenities of crew and passengers remained a priority. The boat is near comfort class, featuring well-appointed staterooms with features that cater to the passenger, the client and the mariner. “We gave a lot of thought and consideration to the comfort of the Mariners, when we designed this vessel. These boats are the home away from home for our guys, and you can’t expect them to be safe, smart, and productive unless they are well rested and comfortable with their surroundings. Each stateroom has a private head, individual climate controls, and TV, internet and phone connections,” said Bordelon
“For us, it’s about the culture of the company,” said Bordelon. “We take care of our people, and its good business to do so. A well rested, happy mariner is a safe mariner. Someone who wants to be here will take better care of the equipment, will take better care of our clients.”
“People always ask me why on earth would I want to be in the ship building business. It’s messy, expensive, and incredibly risky. Well for us it’s simply about the boats. If you stay in this business long enough, you develop a genuine affection and appreciation for these boats.  Some people look at them and see a big hunk of steel. I see an amazing balance of power, engineering, and thought. We wanted to be able to build a unique vessel that was our design alone, and to the needs and standards of our customers. We also wanted to build the vessel on our timeline and make whatever changes we needed, with a focus on quality instead of just price and schedule. A shipyard gives you the options to do all of those things.”
So while the success of the Stingray Class in field operation is a chapter still to be written, in the Stingray Class Wes Bordelon has done his part in bringing the vision full circle. He has not only the crew on both the vessel construction and operations side, but the boat and the corporate culture to help Bordelon Marine carve its new niche for a generation to come. 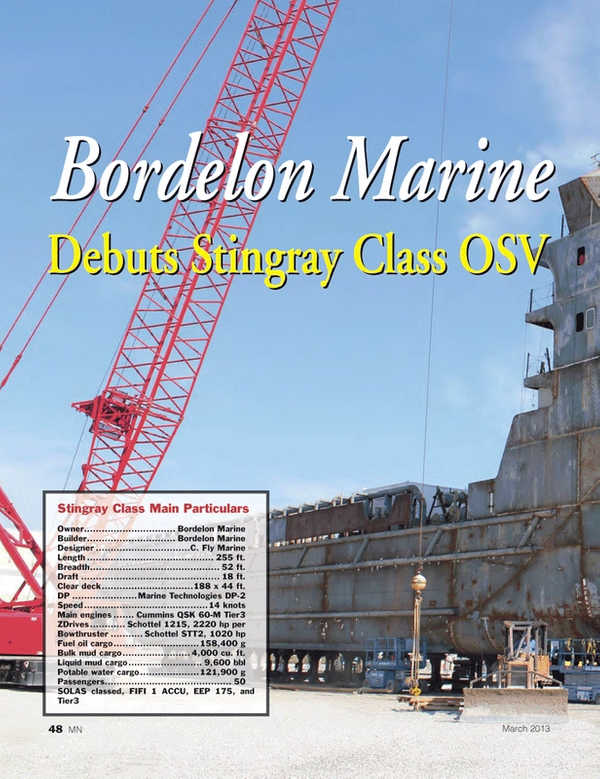