FKAB has secured a contract for the design of a 2,400m³ trailing suction hopper dredger (TSHD). The concept design was developed by the Ministry of Transportation and Communication’s Kaoshing Harbor bureau, which will own and operate the vessels. The order was acquired by the Ching Fu Shipyard. The company won the contract in competition with three other Taiwan-based companies. The Ching Fu Shipyard has commissioned FKAB for the basic and detail design contract based on the company’s experience and international standing in the shipbuilding industry.
In order to improve the dredger’s performance, FKAB will review the concept design and provide the complete basic design package to the shipyard. FKAB will also deliver the detail design and related production drawings. In order to complete the commission swiftly and efficiently, FKAB has chosen Nupas-Cadmatic as their CAD/CAM system for the project.
FKAB is part of the Swedish Mattson Gruppen, which is an independent engineering company mainly active in the marine and shipbuilding industries. With offices in both China and Sweden and over 50 years of experience, it has established itself as a reliable partner. To date FKAB has completed various dredging designs, ranging from backhoes, split barges and trailing suction hopper dredgers. Hopper dredgers are designed at the offices in Sweden as well as at FKAB’s Shanghai office.
The Swedish office created the basic design drawings  and the FKAB China office will carry out detailed and production design with Nupas-Cadmatic. FKAB has owned Nupas-Cadmatic licenses for some years, but up until now the Nupas-Cadmatic design work has been done at the Dalian (China) office. The Shanghai office will now use the licenses for the complete design and production engineering of the dredger.
The power supply of the dredger will be provided by two MAN 6L21/31 1290kW main engines, three 6090AFM75 222kW auxiliary engines and a single CAT3512C 1118kW dredging engine. The power supply enables the vessel to dredge to depths of up to 25 meters. This is sufficient for its main task; clearing the Kaoshing Harbor (Taiwan), the fourth largest port in the world.

Added Features
CoDesigner makes it possible to add new design teams to a project with a few clicks. All object data is accessed via a check-in/check-out procedure that guarantees that only one designer can modify the same object at any given time. Simply by adding remote design teams to a Nupas-Cadmatic project, the project owner can decide which user has access to work on which sections in a ship. The owner can completely define how users can access the database environment. The owner thereby stays in control of the actions taken by subsidiary contractors, from the same company, especially when working with several subcontractors.
CoDesigner allows FKAB’s Swedish and Chinese offices to work together on the same project at the same time. Before implementing CoDesigner they were able to work together on the same projects, but haven’t been able to do so concurrently.
The use of CoDesigner means that projects don’t have to be shipped back and forth and sees data exchange reduced to a minimum.
As a result, FKAB expects to save even more time and money while at the same time being able to draw on the knowledge of both offices. This allows FKAB to increase its effectiveness by seamlessly applying international know-how from multiple offices around the world.

Facilitating Collaboration
Magnus Wikander, Manager at FKAB, told MarineNews, “Nupas-Cadmatic is not only a great tool for our work; it also facilitates cooperation between our offices. Until now we only had Nupas-Cadmatic at our office in China, but now the Swedish offices also use the program fully, which will strengthen FKAB as a complete provider of sustainable marine engineering.”
The trailing suction hopper dredger project is an example of how these companies intend to work together in the future. By fully utilizing know-how in collaborating shipyards, design offices, subcontractors, project owners and clients, the parties expect to gain a competitive advantage. 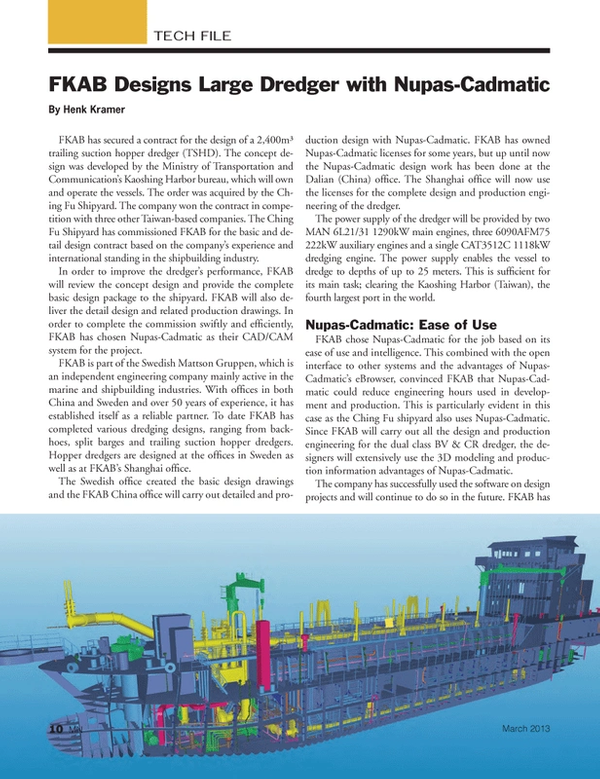