I couldn’t possibly kick off this edition of MarineNews without first acknowledging – and applauding – the passage of the long-awaited, much needed Water Resources Reform and Development Act (WRRDA). Signed into law by the President on June 10th, the bill gives the domestic waterfront a much improved vehicle from which it can get onto the important business of rehabilitating the nation’s waterways and infrastructure. Beyond this, I can’t think of a single sector of our core readership that won’t eventually be impacted in a positive way by this news. That said; I’m not just going to leave you wondering how.
Handicapping the ABC’s of marine infrastructure 101 in this edition is none other than St. Louis-based attorney James Kearns. His article, which begins on page 26, lays out the implications of WRRDA for industry and explains the mechanics of financing to get it done. Kearns has few peers when it comes to understanding the political, legislative and commercial realities of trying to create a world class, 21st century domestic waterway.
Waterways aren’t much good without the engines that propel the boats from point A to point B. It turns out that this is no time to make a mistake below decks. Hence, our look at propulsion technology in this edition really does span the gamut of what’s new, why and what it means as you look at repowering your current fleet or starting from scratch at the shipyard. These variables – discussed within no less than three separate pieces – include commercial solutions for fast craft, LNG propulsion and savvy advice from Joe Hudspeth, who leads readers through the engine selection process.
Speaking of boatbuilding, the nation’s red hot shipyards continue to augment those backlogs, seeing even more additions from a variety of sectors. A big slice of that work comes in the form of ATB orders for domestic yards, whose customers continue to warm up to this versatile design that lends its utility across multiple marine applications. It’s no wonder that as many as 90 ATB’s currently operate in North American waters with another 10 on the order books. None of that is more interesting than the dual fuel ATB bunker unit currently on the drawing board of Elliott Bay Design Group (EDBG). Designed to consume boil-off in the same fashion that ocean carriers have done for many years, EDBG’s innovative concept could eventually revolutionize (and help clean up) inland and ocean fleets of tomorrow. The story begins on page 36.
WRRDA’s passage continues the winning streak for the domestic waterfront, but that’s not the only thing that stakeholders have to be optimistic about. Lurking just around the corner, for example, are the inevitable subchapter M towing rules, something which will bring change, challenges – and business – to shipyards, OEM’s and a myriad of others. I can’t tell you exactly what it all means, but I can promise that it will be exciting. Stay with us at MarineNews as we cover it, as always, from A to Z. 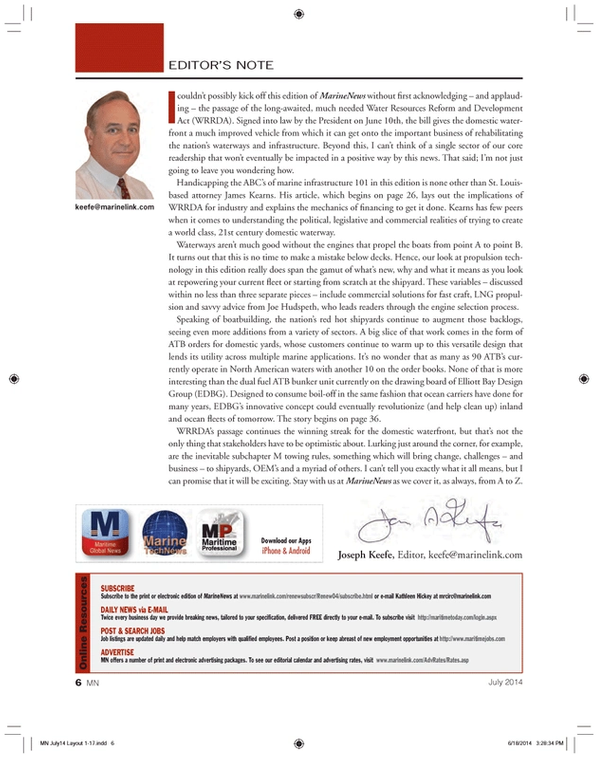