NOAA’s newest output includes a feature on economics. The National Ocean Watch site features facts, charts, story maps and videos. It turns out that our maritime economy – commercial, recreational and everything in between – really matters.

In 2011, the U.S. Ocean and Great Lakes economy produced $282 billion in goods and services and employed 2.2 percent of the nation’s workers—that’s more than twice the percentage of workers in the U.S. agriculture industry. This fact and many others are featured in a 2011 data summary from Economics: National Ocean Watch (ENOW), a product of the National Oceanic and Atmospheric Administration (NOAA) Coastal Services Center.
ENOW’s annual time-series data highlight six economic sectors and cover roughly 400 coastal counties, 30 coastal states, eight regions, and the nation, using data derived from the federal Bureau of Labor Statistics and Bureau of Economic Analysis. Although the data collection lags a bit (2011 vs. 2014), the success story of the 2011 ocean and Great Lakes economy has hundreds of important chapters, and here are just a few:

ENOW data and tools have been used in many other ways—for instance, to develop baseline economic profiles for 70 East Coast communities and to plan for coastal hazards in Florida. The ocean and Great Lakes economy falls into the six broad sectors shown below. In 2011, two sectors accounted for a large piece of the economic pie: the tourism and recreation sector accounted for 70 percent of employment while offshore mineral extraction contributed 37 percent to the total gross domestic product (GDP) of the ocean and Great Lakes economy.
From 2010 to 2011, real GDP grew by 2.7 percent, faster than the U.S. economy as a whole (1.6 percent). Offshore mineral extraction employment grew the fastest of all sectors, with an increase of 6.2 percent. However, ship and boat building grew the fastest in terms of real GDP, with an increase of 19.7 percent. Indeed, four of the ocean economy’s six sectors paid wages that were higher than the national average. The two exceptions—tourism and recreation and living resources—are characterized by seasonal and part-time employment. The tourism and recreation sector paid the lowest average wages but provided many part-time and entry-level jobs for young workers and students. In 2011, California, Texas, Florida, and New York accounted for about half the total employment and half the total GDP in the U.S. Ocean and Great Lakes economy. New Hampshire, Delaware, Alabama, and Texas had the highest rates of growth in employment.
The data regarding states with the highest employment in each of the ocean sectors is telling: Offshore mineral extraction and marine construction activities are highly concentrated in the Gulf of Mexico, with Texas and Louisiana accounting for three-fourths of the nation’s employment in this ocean sector.
The ocean and Great Lakes economy accounts for an additional 132,000 self-employed workers, and these workers received total receipts of $8.0 billion in 2011. In the living resources sector, about 120,000 workers accounted for all the seafood produced in the U.S. Half of these workers (and most fishermen) were self-employed workers. Employment in the living resources sector is concentrated in activities associated with processing and marketing seafood. And, at the end of the day, this means workboats and brown water activities. 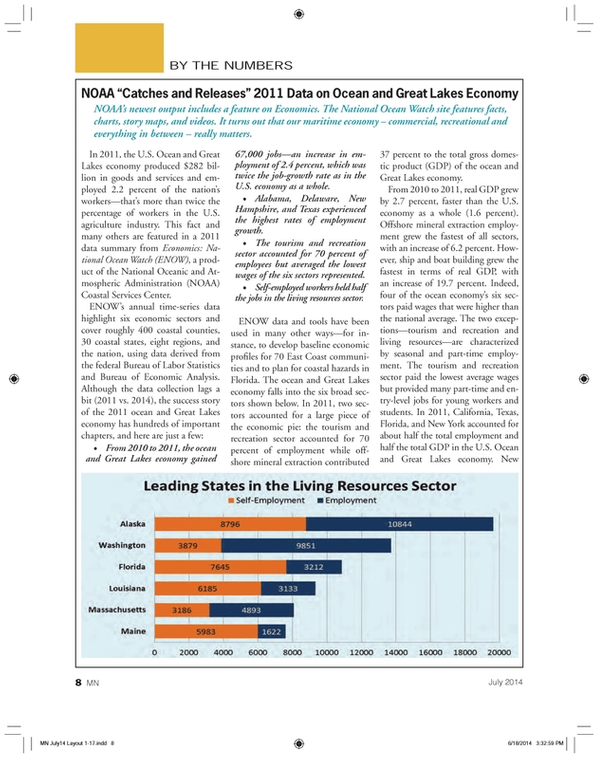