Out of a Congress long on budgetary constraints and short on bipartisanship has come the Water Resources Reform and Development Act of 2014 (WRRDA)—and by wide margins, no less. In my more cynical moments, I am tempted to think that this is because the marine transportation industry is so invisible to most members of Congress that they do not consider it to be worth fighting over. My better self knows that WRRDA is here because our cause is just and our arguments compelling.  (Chairman Shuster should receive a MacArthur Fellowship just for the drawing graphic, which is now everywhere.  In case you missed it, check it out at http://transportation.house.gov/wrrda).

WRRDA is the Word
The recent passage of WRRDA was a major step forward in addressing the dire and deteriorating condition of the inland waterways infrastructure. Perhaps WRRDA’s most important accomplishment for the inland waterways was to loosen the chokehold of the Olmsted Locks and Dam on the Inland Waterways Trust Fund (IWTF). So long as the IWTF has been required to provide 50% of the funds for the soaring cost overruns of Olmsted under the standard cost-sharing formula, there has been little left each year for other new construction or rehabilitation projects in the inland waterways infrastructure.  WRRDA changed IWTF’s share of the costs for Olmsted, going forward, from 50% to 15%. It has been estimated that this could free up as much as $105 million annually for other sorely needed projects on the inland waterways, depending on the fuel tax revenues that the IWTF receives each year. WRRDA also reformed the process by which new construction and rehabilitation projects are to be studied and carried out the U.S. Army Corps of Engineers.
But what WRRDA did not do was to change the basic mechanism for funding infrastructure projects.  Such projects still need to be authorized by Congress and—here’s the rub—funds need to separately appropriated for those projects, whether from general funds or from the IWTF. Historically, project appropriations have not kept up with project authorizations, and appropriations have been made in only annual incremental amounts, rather than for the entire cost of the project as estimated at its outset. This funding process is one of the principal reasons for the piecemeal manner in which construction and rehabilitation projects have moved forward, which in turn has led to inefficiencies, delays, and cost overruns. WRRDA left this basic funding mechanism intact, and with it the risk that construction and rehabilitation projects for the inland waterways will continue to be plagued by inefficiencies, delays and cost overruns, despite reforms in how projects are to be studied, contracted for, and managed by the Corps of Engineers.

Problem Solving 101
Section 2004 of WRRDA offers the maritime industry an opportunity to address this problem.  Captioned “Inland Waterways Revenue Studies,” this section of the Act requires the Secretary of the Army to conduct a study on the “potential benefits and implications of authorizing the issuance of federally tax-exempt bonds secured against the available proceeds, including projected annual receipts, in the Inland Waterways Trust Fund.” This section also requires the Secretary to conduct a separate study of the “potential revenue sources from which funds could be collected to generate additional revenues for the Inland Waterways Trust Fund.”
Although calling only for “studies”—which are to be submitted to Congress within a year—these provisions are significant since they show that Congress now recognizes that such funding alternatives are worthy of serious consideration. And it is Congress that needs to recognize this, since legislative action at the federal level will almost certainly be required to implement whatever specific proposals result from these studies.
Further, Section 5014 of WRRDA, captioned “Water Infrastructure Public-Private Partnership Pilot Program,” requires that the Secretary establish a “pilot program to evaluate the cost effectiveness and project delivery efficiency of allowing non-Federal pilot applicants to carry out authorized water resources development projects for coastal harbor improvement, channel improvement, inland navigation, flood damage reduction, aquatic ecosystem restoration, and hurricane and storm damage reduction.” Although this section looks like it promises more immediate action for public-private partnerships than simply conducting studies, it is subject to the qualification that any activity undertaken under this provision is authorized only to the extent specifically provided for in subsequent appropriations acts.
In conducting the studies required by section 2004 of WRRDA, the Secretary will have immediately available a significant amount of work that has already been done. Among the important studies that have recently been conducted are two that have been sponsored by the soybean industry. The first of these is a study prepared for the United Soybean Board by the Center for Ports and Waterways of the Texas Transportation Institute, titled “New Approaches for U.S. Lock and Dam Maintenance and Funding,” published in January 2013 (the TTI Study). In the discussion of section 2004 in the Conference Report for WRRDA (H. Rep. 113-449, page 194), the Secretary is specifically directed to review, and to the extent practicable use, the assessments completed in the TTI Study.

TTI Study
The TTI Study had two principal objectives: first, to analyze the possibility of transitioning from the current “build and expand” approach to a “repair and sustain” approach to our lock and dam inventory, and second, to analyze the possibility of transitioning from the government’s current lock and dam funding approach to a bonding style approach. With respect to the first objective, the TTI Study describes the long-term, overall cost advantages of adopting a “repair and sustain” approach, but also points out how current funding practices make the adoption of such an approach difficult, if not impossible.
The second objective of the TTI Study is more directly related to the study that section 2004 of WRRDA calls for. In this regard, the TTI Study first describes the benefits that the use of bonds would provide for funding infrastructure projects.  First and foremost, of course, the use of bond proceeds would provide up-front all of the capital initially expected to be required for a project, avoiding the piecemeal, on again-off again, funding process that has caused the inefficiencies, delays and cost overruns that have become endemic to infrastructure projects. The use of bonds would also provide a way to access funding sources beyond the IWTF and general appropriations.
Although section 2004 refers specifically to federally tax-exempt bonds, bond financing could also include bonds that are not tax-exempt, or that are exempt only from state and local taxes.  While the interest rate on such bonds would likely be higher than on federally tax-exempt bonds, they could help to avoid objections about the impact that federally tax-exempt bonds would have on federal tax receipts. The higher interest rate could be offset, at least in part, by the cost savings from improved efficiency and timeliness in carrying out the projects financed with those bonds.
Section 2004 proposes that the bonds be “secured by” the available proceeds, including projected annual receipts, in the Inland Waterways Trust Fund.  If section 2004 was inspired by the TTI Study, as the Conference Report suggests, then the phrase “secured by” is technically inaccurate. In conventional bond financing, the bonds are “secured” by property (such as buildings or equipment) or by cash (such as revenue from sales or services) that are pledged as collateral, but which nonetheless remain available for the issuer of the bonds to use in its business unless it defaults in paying the debt service on the bonds (Think of the mortgage on your house). However, projects for the inland waterways infrastructure, such as locks and dams, do not typically generate any revenue on their own that would available to pay the debt service on the bonds. This assumes that earlier proposals for lockage-based user fees are not adopted. Therefore, the TTI Study proposes that the funds received by the IWTF would not simply “secure”—or be collateral for—the payment of the debt service on the bonds, but would actually be used to make those payments.  Presumably the study to be undertaken by the Secretary will take this into account when it is prepared.
The TTI Study examines various possible scenarios for the use of the IWTF to support bond financing and estimates the total amount in lump sum payments for infrastructure projects that this approach would make possible in each scenario. Certain scenarios in the TTI Study include the assumption that the inland waterways fuel tax will be increased.  This reveals something else that WRRDA did not do, which the inland waterways industry has been advocating for several years, namely, increase the inland waterways fuel tax by six to nine cents per gallon to provide additional revenues for the IWTF.  Earlier this year, Congressman Dave Camp (R MI), chairman of the House Ways and Means Committee, included an increase of six cents in this tax in his draft of the Tax Reform Act of 2014, but this proposal to overhaul the tax code has not made much headway in the House. The TTI Study shows the dramatic effect that such an increase in the fuel tax would have if it were leveraged through the use of bond financing.

The P3 Study
The second study sponsored by the soybean industry was prepared for the U.S. Soybean Export Council by The Horinko Group, titled “Proposed Public-Private Partnership Projects for U.S. Inland Waterways Infrastructure Financing, Operations and Governance,” dated December 2013 (the P3 Study).  As suggested by its title, the P3 Study is more a study of public-private partnerships than of the specific type of bond financing referred to in section 2004 of WRRDA, but in this the P3 Study builds upon the TTI Study and expands upon it.  The pilot projects that the P3 Study recommends are leases of certain specified locks and dams by non-federal entities from the Corps of Engineers, and the financing structure of such leases is assumed to include debt financing from private sector investors.  Such debt financing could be with bonds of the very kind that are contemplated by section 2004 of WRRDA.  Although the P3 Study does not receive special mention in the Conference Report for WRRDA as does the TTI Report, the P3 Study is an equally valuable contribution to the research and analysis and debates that will be necessary to find new ways to provide funding needed by the inland waterways infrastructure.
Private sector financing for infrastructure projects is not that hard.  It has been done in other types of infrastructure projects, with success.  Much work has been done, especially by the soybean industry, to show how it can be done for the inland waterways, and WRRDA has given us the opportunity to do it.  Now it’s our turn. 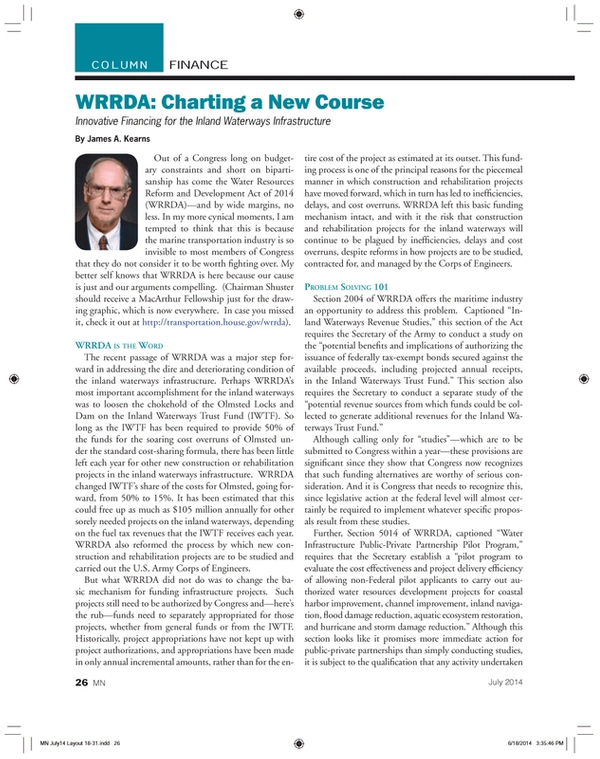