Get Your Motors Runnin’

Advance Work on Engine Selection with the OEM pays handsome dividends when your vessel is delivered. Don’t skip this necessary step.

It is hard to say why the phenomenon occurs, but with every new engine that arrives in any boat yard comes a sense of approval and appreciation. Heads turn and work even stops as the iron horsepower machines make their way onto the production floor. Such admiration is warranted; after all, the engines are the heart and life of the vessel – without them, the cliché becomes true and you are dead in the water. With the advancement of technology, expectations have grown and we have become desensitized, yielding a hard-to-impress society.
Recently, I was able to get an up close look as to how quality engines are made when I was afforded the opportunity to tour the Scania engine factory. Just prior to visiting Scania, I also had the privilege of touring the Hamilton Jet factory in Christchurch, New Zealand. I can attest that both these factories are impressive at the highest levels and that sophisticated engineering teams, skilled production labor, and stringent quality measures are in place to ensure that the marine industry is getting the best propulsion systems that the regulators will allow.

Burn Baby Burn
The Environmental Protection Agency (EPA) may have had the intent of sparking innovation and moving the industry forward towards the production of cleaner burning engines, but at what expense?  The engines that have been manufactured as Tier II and Tier III solutions have both been found to be less fuel efficient and more expensive. Could one have argued that a more efficient engine would burn less fuel and produce fewer emissions, than a cleaner burning engine that has to consume greater amounts of fuel and gas off a corresponding amount of emissions in the process? Engine manufacturers have been able to meet compliance standards through in-cylinder technology. In essence, the engine has to burn more of the fuel so that less waste (emissions) is produced. Herein, lays the problem. In order to burn more of the fuel, the engine consumes extra fuel to enhance the combustion process. Tier IV promises to be more of the same, only better, with the added benefits of a urea-based SCR system.

Narrowing the Playing Field
When it comes to engine selection, boat builders really cannot have favorites. Sure, we take note of certain models that may have experienced warranty issues and before the confines of EPA certification were in place – builders had options and price, delivery, and support really mattered. Now, the process of engine selection is quite simple, because there are so few options. It used to be that the naval architect would evaluate the application and calculate the required horsepower. Builders would then flip through all the engine selection guides and present their customers with a list of offerings in the suitable power range with the appropriate duty cycle rating.
Builders and architects prefer to recommend engines with the best power density ratio – or in other words, the most ‘oomph’ for the weight. Customers will have their favorites too, either evidenced by the color of engine they prefer, or it is clearly stated by the logo on the baseball cap they are wearing after attending a trade show. Now that the game has changed, builders are lucky to have even two options to choose from. Some manufacturers have more gaps in their Tier III production line than others, but virtually all brands have had their challenges and were forced to change their offerings.

Ugly Step-Sister
Once upon a time, it used to be that boat builders could offer discounts on sistership vessels using pre-existing designs. The discount comes in the form of savings on design and engineering costs. With the triggering of Tier III, engines typically grew larger, heavier, and in some cases had varying horsepower offerings than their Tier II predecessors, which can necessitate a change in gear box, prop size, and shaft diameter. What may seem like insignificant details can actually alter the entire weight and balance of the boat, change engine bed configurations, and possibly even tip the scales over the 2% allowable weight tolerance that the USCG accepts in accordance with the sistership status guidelines.
The variation of engines from one tier to the next has also erased the advantages of fleet commonality that came with standardized parts, swing units, and crew familiarity. Builders have also had to modify their construction practices as exhaust ports have changed, mounting feet have been repositioned, and plumbing connections are sometimes located in awkward locations. It was beneficial to see firsthand the challenges the engine and water jet manufacturers have to overcome on the production line. Not only do they have to deal with the mandated technology evolution, they also have to find a way to build them in a timely and economical manner. The benefits go both ways as builders and designers can provide feedback to the manufacturers to address any challenges that have been experienced, aside from the holes in the product range.
In the rush to get product out the door, there have unfortunately been costly errors. Given the long lead time for engines, it is absolutely critical that the engines are delivered as ordered and in working condition. The room for error is slim to none, as starting the engines is one of the final steps in the vessel construction process. When drawings are inaccurate, or engines are delivered with a different sized oil pan, or when plumbing connections that used to be standard are now suddenly no longer supplied, there are delays and the onus immediately falls upon the builder to make it right. One vessel’s delivery was delayed by nearly 30 days because of something as small as a mis-wiring in the manufacture’s engine wire harness. Overall, most engine suppliers are responsive and work quickly to resolve any shortcomings.

Seeing Triple
It might appear like you will be stuck with you old boat forever, now that hopes of a sistership are gone and the thought of a Tier IV engine and keeping your urea tanks filled seems downright oppressive.   There may be an alternative that offers considerable merit, given the right application. Currently, EPA Tier IV standards will only apply to engines greater than 600 kW (805 hp). Some customers may choose to produce the power they need through quantity at the lower horsepower levels. There are no regulations against installing three Tier III engines rated at 800 hp in lieu of twin Tier IV engines rated at 1200 hp with an SCR system.

Engaged, Moving Ahead
Industry has found EPA’s progressive rollout schedule to be onerous, forcing some engine manufactures to push product out before it is really proven, refined, and ready to be supported. The research and development teams are so focused on EPA compliance that tunnel vision has become consequential and we have seen little to no developments regarding other engine technologies; specifically hybrid or LNG solutions. Does the advent of Tier IV mean the end is in sight? Propulsion manufacturers will continue to focus on compliance with the regulations, but success comes with innovation and manufacturers will be looking to make advancements outside the scope of the law.  These manufacturers are also careful not to lose sight of the individual needs of their customers. At Scania, Hamilton Jet, and certainly at factories elsewhere, during the very first stage in the production process paperwork is physically attached to the unit to identify who the customer is. Like your new boat, these units are only made to order. Take the time to visit your boat builder and discuss what propulsion systems are available to keep your new vessel powered and moving ahead. 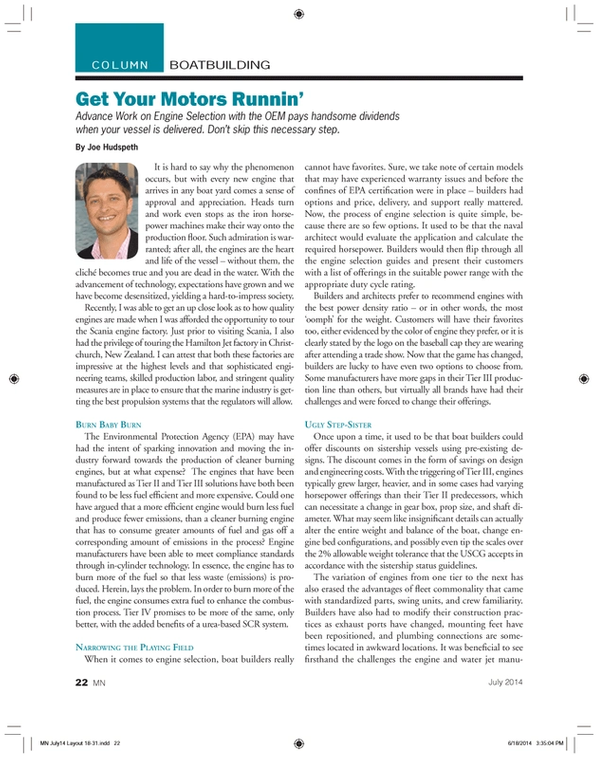 Read Get Your Motors Runnin’ in Pdf, Flash or Html5 edition of July 2014 Marine News