EBDG’s LNG bunkering barge design receives ABS approvals as the maritime industry increasingly looks to LNG as a fuel of the future.

In early June, Federal Maritime Commissioner William P. Doyle told listeners at an LNG Bunkering conference in Vancouver, Canada that “Liquefied Natural Gas (LNG) bunkering in North America is moving forward … There is an abundant supply of natural gas in North America. Utilizing natural gas as a marine fuel would help ship owners and operators comply with the MARPOL Annex VI requirements to reduce air pollution from ocean going vessels.” That much is true.
It’s also true that there is any number of ways for vessel operators to get to the Promised Land. Nevertheless, LNG – as a fuel – has certainly stepped out into the lead on that mission. And, the race to design next generation bunker barges – those carrying LNG for all those soon-to-come LNG powered vessels on the backlogs of U.S. shipyards – is in full swing. In the thick of that race is the Seattle-based Elliott Bay Design Group (EBDG), whose EB-2000 LNG ATB Barge concept recently obtained approval in principle (AIP) from the American Bureau of Shipping (ABS). According to EBDG, the EB-2000 offers versatility in LNG transport and bunkering. The barge will be offered in both an optional spoon or ship-shaped bow combined with a (patent pending) flush trunk and foc’sle arrangement which provides proven offshore performance.
Curt Leffers, EBDG Project Manager, told MarineNews in June, “We are excited to obtain ABS approval in principal on our bunkering barge design. Our 2,000 cubic meter design is the basic platform that can be customized to meet our customer’s operational and cargo capacity requirements.” Also exciting is the prospect for yet another use for the versatile, economical and enduring ATB.
The EB-2000 LNG is just one of several LNG barge designs developed by EBDG for clients to meet growing demand for efficient and cost-effective refueling of LNG powered vessels. The innovative 257 ft. EB-2000 was designed for either an ATB or towed configuration, and features a marine diesel fuel cargo tank for refueling duel fuel vessels.

LNG: Cost, Economics and Logistics
Recent data reveals that LNG in the U.S. is now more than 50% less expensive on an energy-equivalent basis than marine residual fuel and marine distillate fuel. And, while no one can say for sure that this price advantage will continue, the obvious environmental benefits and possible boost to the bottom line has led to a sustained commitment to building dual fuel, gas ready and LNG powered merchant vessels.
Separately, the Port of Pittsburgh Commission in May began soliciting proposals to provide research support for a liquid natural gas project for the Pittsburgh marine-corridor by developing cost/benefit analyses and identifying shore-side and midstream refueling requirements. The effort will evaluate the possible business opportunities that might become available to inland waterway stakeholders should liquid natural gas be introduced as an alternative fuel for regional towboats Like the bluewater projects already announced, momentum is building for the possible conversion of inland workboats from diesel to natural gas propulsion. In fact, there are currently more than 40 vessels in North America that are under development or evaluation for conversion to LNG fuel. Any and all that come to fruition will need bunkers.
There are more than a few LNG / Dual Fuel deep draft vessels on the books in U.S. yards today. They will all eventually need a reliable, local and reputable source of bunkers. Curt Leffers, referring to EBDG’s own design, said, “There will eventually be opportunities for bunkering barge services in the pacific northwest, gulf coast, great lakes, and in the southeast region.” He declined to discuss specifics, saying only, “Although we’ve designed several LNG ATB vessels for external customers, we do not have yet a customer that has placed an order with a shipyard.”

The EBDG Concept
As a concept and design idea – the dual fuel tug, rigidly connected to the LNG bunker barge and using boil-off gas in the process – was not originated at EBDG. According to EDBG’s Leffers, “This concept has been a topic of discussion in the industry and is attractive from the standpoint of boil off management and efficiency of operation. Having dual fuel capability allows the tug to use diesel when not coupled to the barge.” That said; EDBG has embraced the idea and incorporated it into their proprietary designs.
The EBDG bunker barge will carry typical capacities of between 2,000 and 3,000 cubic meters of LNG. With the relatively low specific gravity of LNG, anticipated drafts are between 12 and 18 feet, depending on the barge design. The volume necessary to refuel a containership would be on the order of 2,000 to 3,000 cubic meters, but this ultimately depends on the size of tanks of the vessel. Leffers adds, “The maximum draft of the bunker barges is 18 feet, but this requirement is really driven by operating restrictions, since the specific gravity of LNG is relatively low. Draft has not been an issue.”
While boil-off consumption by the propelling engine is not a new concept – large LNG carriers running on steam plants have been doing just that, safely and routinely, for decades – getting that done with an ATB arrangement may be something different altogether. Curt Leffers told MarineNews that there aren’t (yet) specific regulations pertaining to a gas connection between a tug and barge in an ATB configuration.  But, he cautioned, “There are numerous technical challenges that must be overcome in order to have a reliable and safe fuel connection between the tug and barge. From an operation standpoint, consideration must be given to procedures related to connection and disconnection of the gas connection.”

Emerging Regulations & Guidance
The U.S. Coast Guard issued a notice seeking public comment on two draft policy letters regarding safety measures for LNG as a marine fuel. The second of those draft policy letters discusses voluntary guidance and existing regulations applicable to vessels and land based facilities conducting LNG marine fuel bunkering operations, and provides voluntary guidance on safety, security, and risk assessment measures for these operations.
Separately, the American Bureau of Shipping (ABS) in March followed the Coast Guard policy letters with a report of their own, entitled Bunkering of Liquefied Natural Gas-Fueled Marine Vessels in North America. The objective of the report is to provide guidance to potential owners and operators of gas-fueled vessels, as well as LNG bunkering vessels and facilities, in order to help them obtain regulatory approval for projects.

Horses for Courses
The ATB has been around for a long time, with as many as 75 in operation today in North American waters and another eight on the order books in domestic shipyards. Popular in Jones Act and niche domestic trade routes, the ATB, with its reduced crewing levels, has a bright future especially if shortsea shipping gets another kickstart in the near future. And, of course, another promising outlet for this style of transportation includes use as an LNG bunkering platform. The EBDG version adds its own twist to the mix.
“One of the special design features that our 2000 CBM LNG ATB has is a diesel tank.  This allows for flexibility in operation and services for the vessel owner, said Leffers, adding, “We have been designing around the Intercon coupler systems for our ATB designs.”  Beyond this, he said, ATB’s are being considered for many concepts; shortsea shipping, container-on-barge for niche ports among them. “EBDG’s engineers have been brainstorming a variety of ATB applications with customers.”

The Way Forward
Leffers left MarineNews with a clear idea of where he and EBDG think things are headed next – and they intend to be there. “The way that the market is trending with LNG fueled vessel orders, the use of LNG bunker barges will be important in the fuel supply chain. Flexibility in operation is an important aspect of barge design.”
Natural gas, as a marine fuel, is strongly supported and endorsed by the Obama Administration.
FMC Commissioner Doyle, speaking last month at the Vancouver-based LNG conference, also left no doubt as to where he thinks things are going. “As this fuel source is taking hold in the commercial U.S. domestic coastwise trade, it is now gaining traction in the inland waterway system and the international container trade.” He added, for emphasis, “Appropriate, safe and secure bunkering operations are mission-critical to a successful LNG marine fuel program.” Just a few miles to the south, Elliott Bay Design Group is already working to ensure just that. 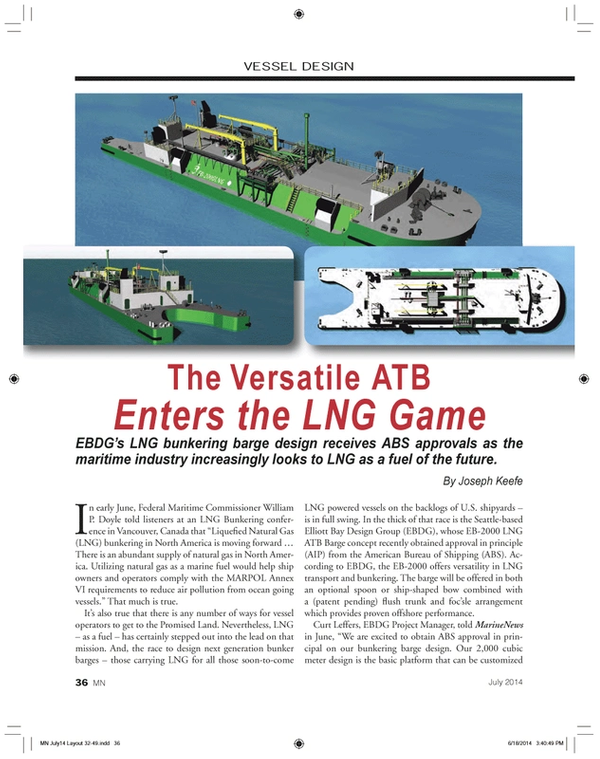