For decades, barge owners and operators had no reason to think twice about their rigging. There were only a few choices when it came to winches, and there were ratchets as well. Because of the simplicity of these machines, few people in the industry were compelled to think critically about how such a basic item might be improved. But winches and ratchets have their downsides: fouling and birdnesting can and do happen. Wire rope is heavy, and traditional rigging takes a lot of it. And old-fashioned winches require a good amount of time and effort to operate. But what else was there?
In 2008, the Patterson Manufacturing Company, of Pittsburgh, Pa., developed the YoYo Barge Winch, a revolutionary design that reflected a total rethinking of the way winches do their job. And now, within the next few months, Patterson is on track to deliver its 10,000th winch—a significant milestone that reflects just how thoroughly the YoYo has taken over North America’s waterways in just a few years.

Keeping an Ear on the Customer
David Grapes, president and CEO of Patterson, is not surprised at the YoYo’s success. That’s because the YoYo is a direct result of customer feedback, something the people at Patterson respect and value. The engineers had originally come up with an idea for a YoYo-style power winch, and they presented this to the people at American Electric Power (AEP), headquartered in St. Louis, Mo. and Patterson’s biggest customer. AEP was interested, but it turned out that what they really wanted was a manual winch for barges. “We expanded the idea from there,” says Grapes, “and everybody in the industry has embraced it.”
That’s not an exaggeration—Patterson figures that, counting rebuilds and re-rigging, the YoYo has been the preferred winch for several years for more than 50% of the winches in play on an annual basis. With approximately 4,000 to 5,000 winch-sale opportunities per year, that’s a lot of YoYos. And once the 10,000th YoYo winch is installed, an overwhelming majority of barges built in the last five years in the U.S. will boast this revolutionary design.
What does this mean for the inland waterways shipping industry? It means heightened productivity and profitability. Because the YoYo uses a single-stacking design, operators no longer have to deal with springcoil, fouling, and uncontrolled spooling. A patented double-dog design allows easy maximum line tensioning and makes it simple to use. The 25 feet of takeup (or 40 feet for tank barge applications) mean less wire rope to heave around and eventually untangle. “The deckhands all prefer the YoYo,” says Grapes.

Making a Tough job a Little Easier
People at AEP confirmed this preference. “Throughout my 35 years of decking, I’ve had to use hundreds of different types of winches. The YoYo winch is nothing like conventional winches,” says Syd Gibbeaut, port mate (now retired) at AEP River Operations. “This is certainly an amazing winch, one that will have a major impact on our industry.”
Bruce Darst, also retired from his position as port captain at AEP, concurs. During the testing, he said, “We’ve been using the Patterson YoYo winch as a barge connector for three years. The winch has proven to be super-dependable and is both easy to tighten and to pull wire off the drum. It’s also very easy to replace the wire. We’ve been field-testing eight of these winches and have only replaced one wire in that time, which also suggests it extends the working life of the wire cable. Because of its innovative design, it’s impossible for the wire to become entangled or birdnested on the drum. This is the winch’s biggest advantage and saves untold time and effort in building tow. It’s a very high quality winch, easy to use and maintain, and is far superior to the barge-connecting winches that have been commonly used in the past.”
John Byer, AEP boat captain, sums up one of the main reasons the YoYo is so popular: “Once you start to pull the wire off of the winch, as a result of the winch design, the wire pays itself off the winch. It’s the best mousetrap out there, and it’s where we need to be.”

A Partnership in Testing Innovation
AEP’s involvement in the development of the YoYo was instrumental. Patterson provided with company with some of the first products, and they tested them over two years. AEP personnel collected both quantitative and qualitative information on ease of use, time savings, injury reduction rates, ROI, and overall savings. By the end of the trial period, AEP had concluded that they could save millions of dollars by making the YoYo their standard winch.
As a result of those years of development and testing with AEP, Patterson has determined that the YoYo is 50% faster than ratchets, which, according to the company’s innovative ROI calculator, means that the winch actually pays for itself in a short amount of time. Safety is also a plus—less birdnesting means fewer man-overboard opportunities.

Standardization Brings Safety and Efficiency
Taylor Grapes, engineering director at Patterson, notes that the increasing prevalence of the YoYo is leading naturally to a positive change throughout the entire inland shipping industry, not just at AEP: standardization. With all of Patterson’s customers using the YoYo (including the three biggest towing operations in the industry) and increasing numbers of barges adding the YoYo on a continuing basis, he envisions a day when every barge will be exclusively equipped with this new design.
“The YoYo is becoming the de facto standard in this industry,” he says. “As more and more owners and operators upgrade, rebuild, re-rig, or build from scratch, the more YoYos we’ll see, until basically you’ll have nothing but the YoYo on board anywhere.” This represents a positive outcome for Patterson, of course: if owners are specifying the YoYo; that means more sales for the company.
Standardization also benefits the industry as a whole. Most industries agree that voluntary technical and trade agreements among experts contribute to increased safety, predictable outcomes, and better business—this is why organizations like the International Standards Organization, or ISO, exist. Engineers and economists at many standards groups including the ISO, the World Trade Organization (WTO), and the Standards Council of Canada have conducted a multitude of global studies proving the measurable value of standards as they apply to a variety of industries.
Beyond formal standards, the adoption of a standardized technology increases user familiarity, which results in safer conditions. If every deckhand is familiar with the operation of the YoYo, and the YoYo is on every barge, then that means everyone can work swiftly and safely anywhere without the downtime associated with overcoming the learning curve.
Another advantage to standardizing the YoYo is increased productivity. Because this winch allows workers to make and break a tow in half the time it takes to do it with ratchets, operators can ensure that more of their time is spent actually out on the river. The elimination of fouling also saves time and effort while increasing user safety. These enhanced efficiencies can really add up when extrapolated to consider the average number of barges per tow.

Beyond North America
Taylor Grapes is pleased with the overwhelming success of the YoYo winch in North America, but he is setting his sights higher for the business in the future. “As the South American market continues to modernize and mature, we envision an influx of YoYos onto both Hidrovia and Amazon barges,” he says. “The Hidrovia Waterway is the Mississippi of South America, and everybody is rethinking up their operations right now as these markets grow and mature. It simply stands to reason that our winch could lead to the same sorts of operator savings and success in these markets as we’ve had here in the U.S.”
Patterson has already begun branching out into South America over the past six years—and business is booming. “Combined revenues from the three primary markets in South America (the Parana-Paraguay Hidrovia, the Amazon, and the Magdalena) have increased every year since we first entered these markets, and we expect this to continue,” adds Grapes.
Eventually, Patterson will move into the shipping market of the lower Danube River, which is in the process of modernizing and expanding its market for United States shippers. Because of low river levels (and historic but low bridges), self-propelled barges are the norm on the Danube. Patterson believes there is a market there for advanced technology like the YoYo. 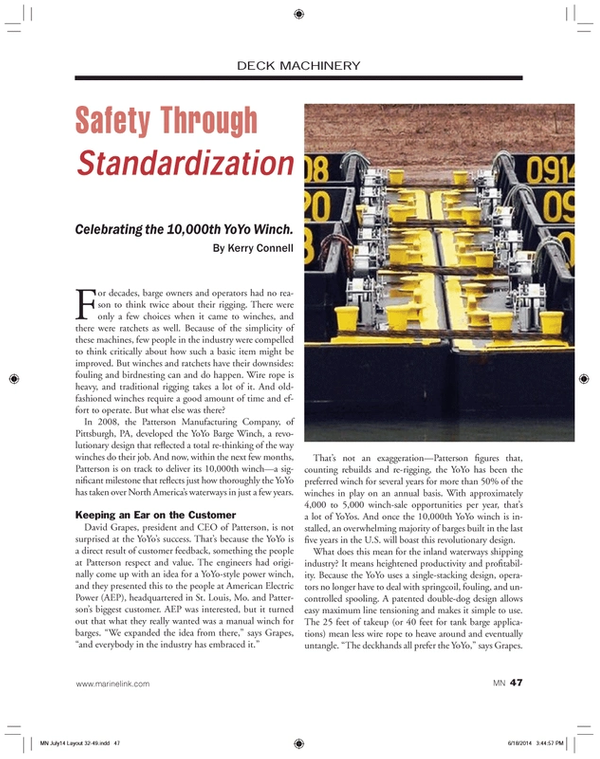