A recently released study entitled INLAND NAVIGATION IN THE UNITED STATES evaluates the economic impacts and the potential effects of infrastructure investment on our economy. The comprehensive, 98-page document was prepared by the University of Kentucky and the University of Tennessee in November 2014. Sponsored by the National Waterways Foundation (NWF), the voluminous text describes an effort that has spanned more than two years during which time the authors produced a conservative evaluation of commercial navigation’s system-wide economic impact, both as this system is currently configured, and as it might be through a course of renewed infrastructure investment. To say it may be the most well-written and fully researched effort on this topic would not fully describe the depth of the information that the report contains. Moreover, the report shows that there are simply no better ways to move, store, and otherwise manage freight than what is afforded by inland navigation. If there were, shippers would choose them. This simple reality forms the basis for the work that follows.

Because, the report begins, “Inland navigation has traditionally played a vital role in what is a uniquely American transportation landscape,” its history is long and storied. Nevertheless, the waterways’ future function as a freight resource is still unclear because of the pressing need for infrastructure investments that may or may not come.  Also according to the report, “These investments will require fiscal resources to be marshaled and combined into a national policy that capitalizes on the comparative efficiencies of all freight transport modes.” Eventually, the document goes on to spell out the consequences o either eventuality.
The goal of this current research is to partially address this information shortfall, done via two elements: the evaluation of the total economic importance of commercial inland navigation to the country in navigation’s present form and assume only sufficient investment to maintain current system performance. This is followed by a scenario that considers the economy-wide impacts of proposed improvements to navigation system capacity and performance under traffic demands that are similar to current freight flows.

As we head into the New Year – one which heralds the new WRRDA bill as the hope for an inland rejuvenation – the nation’s inland navigation system can be summarized by the numbers below.

The report also outlines current economic transportation value of the commercial inland navigation system, but also notes that it has undergone continued use for decades beyond its original design life. Thus, many navigation-related infrastructure assets could be modernized to yield greater capacity and improved reliability. Hence, the report also considers the broader economic benefits of investment in navigation infrastructure modernization. The results suggest that, beyond yielding generations of new freight capacity, it would also lead to the creation of immediate jobs and income, as well as long-term benefits. Somewhat ironically, it is a system abandonment scenario that provides perhaps the basis for evaluating the economic impacts of the inland navigation system. The study process first considers the impact of the sudden and complete elimination of navigation as a freight alternative. Not surprisingly, this would result in profound economic losses and displacements in terms of jobs, incomes, and aggregate economic activity. Indeed, the initial job losses alone would total more than one-half million full-time positions. Given the resilience of the U.S. economy and the functioning of markets, a portion of the sustained damage would be “repaired” through the relocation of economic activity and a rebalancing of productive inputs. However, even in the long-run, economic adjustments could only restore about 40% of the initial losses, so that the permanent, unrecoverable loss of jobs would still approach 350,000. These jobs and their associated incomes represent benchmarks against which navigation’s future economic impacts can reasonably be compared.
Access the report here: http://www.nationalwaterwaysfoundation.org/documents/INLANDNAVIGATIONINTHEUSDECEMBER2014.pdf 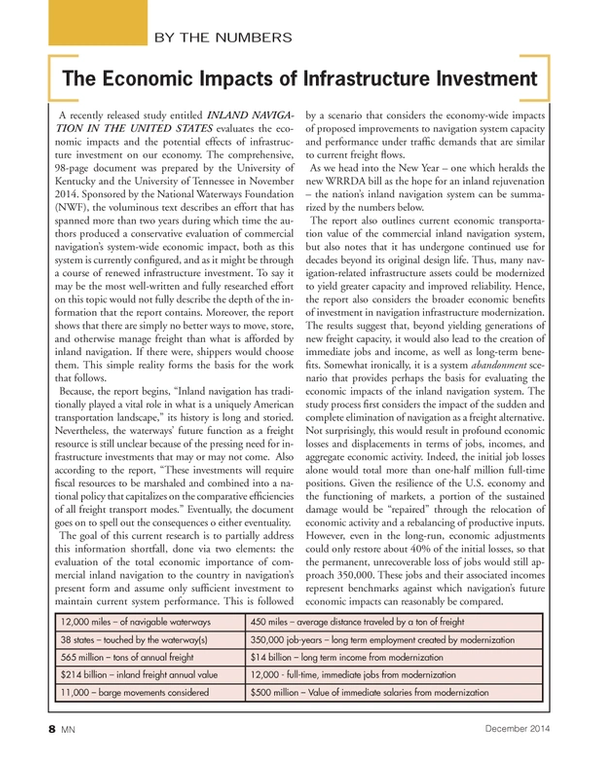