The importance of shipping to world trade hardly needs stating, carrying as it does more than 9 billion tons of cargo each year in some 4,500,000 vessel movements. And while there have been major improvements in ship and operational safety over the past decades, casualties do still occur and will continue to do so. Engine breakdowns, fire, bad weather and, of course, the human element can cause serious incidents putting a vessel, its crew, cargo and the environment at risk.  Marine salvage is the business of providing services to casualty vessels with the objective of saving life, protecting the environment and saving property.
The salvage industry has evolved over the centuries and one of its underlying principles is that salvors should be encouraged by the prospect of a fair reward to go voluntarily to the aid of a casualty vessel. The principle of “no cure, no pay” is long established and widely accepted: the salvor will only receive an award if the job is successful. The award is largely based on the nature of the services provided, the conditions and the value of the property saved from peril.
Marine salvage is governed by the 1989 Salvage Convention and can be conducted under a variety of contracts in many jurisdictions. The most commonly-used contract is the Lloyd’s Open Form (LOF) salvage contract, which has been in existence for more than 100 years. It was developed by the London insurance market, Lloyd’s, and continues to be administered by the Lloyd’s Salvage Arbitration Branch reflecting the important role Lloyd’s retains in the insurance of ships and cargo. The contract has evolved to keep pace with changes in shipping and the current edition was published in 2011.
The key feature of LOF is that it enables salvage services to be provided quickly without the need to negotiate terms. The salvor undertakes to use his “best endeavors” to save the ship and cargo and prevent pollution and parties agree to settle the award after conclusion of the services, based on the value of the property saved and taking account of several factors including the degree of risk to property, the time taken and the skill of the salvor.
Most awards are agreed to amicably but if there is a dispute a defined process of arbitration, managed by Lloyd’s, allows for an independent arbitrator to decide what is a fair award for the services provided and there is an appeal procedure. There is a trusted process for the deposit of financial guarantees.
ISU, as the unified, global voice of marine salvors supports and promotes the use of LOF because it believes that it has great benefits for all parties including the owners and insurers: LOF is a clear and simple contract and enables rapid intervention in an evolving casualty situation. There is no need to negotiate terms “upfront.” The contract can be quickly agreed with a verbal agreement that is legally binding. It can be signed at a later stage.
The integrity of the contract is assured by Lloyd’s, a world scale insurance market with considerable resources. There is a defined process and resources to administer use of LOF and it is a fair contract and has a clear dispute resolution process using Lloyd’s Arbitrators.
For owners and insurers, one key benefit is that the risk of the salvage operation is carried by the salvor alone. Salvors are adept at managing such risk and yet other forms of contract used in a casualty situation can mean that the owner and insurers bear some of the risk of the operation.
Despite these benefits it is well recognized that there is a decline in the use of LOF that goes beyond the overall decline in all salvage operations due to improved ship and operational safety. In recent years, there have been some 50 LOFs annually, down from 200 LOFs each year 20 years ago. There are various theories about the disproportionate decline in the use of LOF such as the idea that shipowners and their insurers think the contract is costly to use and it is too generous to salvors. There may also be a lack of understanding in the insurance community about the contract and its benefits. Additionally, it is possible that excess capacity among salvage contractors means they are more prepared to work on daily hire rates and on other commercial terms. ISU believes it is important to improve levels of understanding of this important contract especially among the younger element of the underwriting community.
LOF is not perfect; not least because it is chiefly structured to reward the saving of property. That may well have been right when the order of priority was saving life; then saving property then protecting the environment, whereas today the order is saving life; protecting the environment then saving property. Many salvors therefore believe that LOF does not adequately reward them for the benefit their work confers on the environment.
ISU recognises there are a variety of other salvage contacts which have their place in global salvage and it supports competitive global provision of salvage with its members free to agree whatever terms they wish when providing salvage services. But the time has come for LOF users and supporters to once again become active in promoting its benefits. 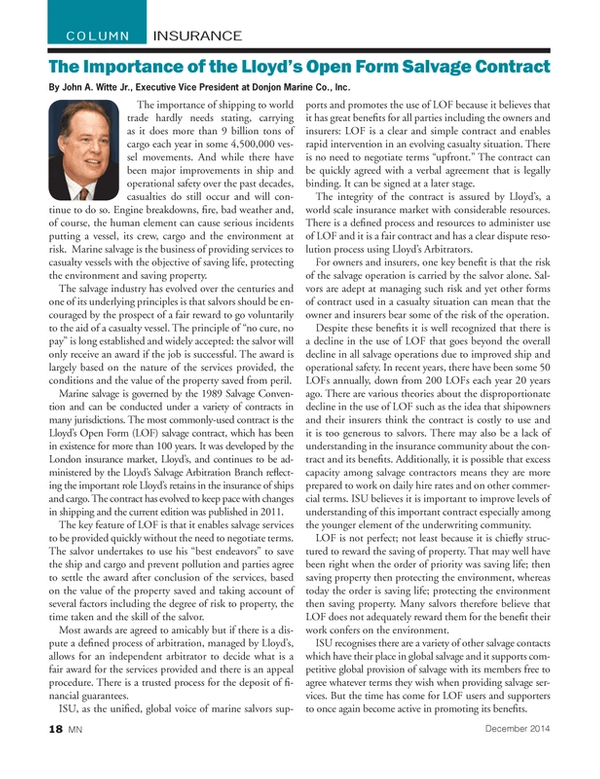