In the early hours of Friday, October 17, the crew of the Russian cargo ship Simushir attempted to repair a broken oil heater. On its way to Pevek in the Russian Far East, the vessel suddenly lost propulsion and began drifting toward the nearest land, which in this case was the archipeligo Haida Gwaii. Just off the coast of northern British Columbia, about 30 miles south of the border with Alaska and 447 miles north of Vancouver, Simushir was carrying 50 tons of diesel and 400 tons of bunker oil, plus chemicals for mining.

As the scenario unfolded, the vessel’s situation was now particularly worrisome. Seas were five feet and winds were 13.5 knots gusting to 17.5 knots blowing the freighter northeast. Environment Canada had issued a gale warning. With Simushir dead in the water, rescue ships hours away and an onshore wind blowing, residents of Haida Gwaii held emergency, preparatory meetings and hoped for the best. That’s because the islands are home to an $83 million fishery, a marine reserve, the Gwaii Haanas National Park Reserve and Haida Heritage Site. The environmentally-sensitive archipeligo, informally known as the Queen Charlottes, are sometimes called the “Galapagos of the North.” And, the Simushir was heading straight for the park on the south end.

Eventually, however, the close coordination between the Canadian Coast Guard, U.S. Coast Guard and Foss Maritime turned a potential shipwreck and possible salvage operation into a study of close coordination. A situation seemingly headed for an apparent casualty became the basis for a textbook response operation. How it came together was certainly no accident.

Simushir’s Slippery SITREP
The Simushir, a 1998-built 441-foot-long general cargo vessel had picked up 298 containers of mining equipment at the Port of Everett, WA, just a few days before. On Tuesday night, October 14, the crew of 11 loaded heavy bunker fuel in Port Angeles and set off for Pevek. As the engine casualty became clearer, it was unclear whether the Simushir called the Canadian Coast Guard (CCG) or the other way around. Nevertheless, the CCG immediately began to mobilize for an emergency. The agent the Russian shipowner, the Sakhalin Shipping Company, or SASCO, got a call from the Canadian Coast Guard and began making arrangements for an emergency tow.

Eventually, all stakeholders – the CCG, the U.S. Coast Guard, SASCO and Seattle-based Foss Maritime began mobilizing resources. In this case, the biggest obstacle to a happy ending was Simushir’s location west of Haida Gwaii. The nearest international port is on the British Columbia mainland at Prince Rupert. In good weather, the ferry from Prince Rupert on the mainland to the town of Skidegate on the eastern side of Haida Gwaii takes eight hours to cross the 93 nautical miles of Hecate Strait. Simushir was on the opposite side of the island.

Foss Maritime’s sister company, Totem Ocean Trailer Express, was first on the scene after its Ro/Ro cargo ship, North Star, got word in the early hours of Friday morning and diverted course to be on hand if needed and to monitor the situation until the Canadian Coast Guard could arrive. It was never used. Later that evening, the situation worsened. With the Simushir rolling and pitching in the prevailing sea and swell, the Russian captain was injured, reportedly breaking his nose and several fingers falling on the bridge.

By early morning, U.S. and Canadian helicopters stood by on Haida Gwaii and ships were underway to help, but the Simushir was still adrift. Before the incident was over, Simushir would drift for 20 hours, to within nine miles of the coastline.

Coordinated Response
On Friday, the Canadian Coast Guard used a Cormorant helicopter to evacuate the Russian captain to medical care on Haida Gwaii. He was later airlifted to the hospital in Prince Rupert on the mainland. By some accounts, once the captain was no longer aboard the Simushir, the CCG had trouble communicating with the crew in English. CCG ships had not yet arrived. In the meantime, however, SASCO’s local agent had arranged with Foss to divert the Barbara Foss from her regular route to safely tow the Simushir to port for repairs.

It turns out that Foss tug crews are no stranger to the world of emergency response and oil spill prevention. In fact, the Washington State rescue tug contract has often belonged to Foss and, for the first few years, the vessel employed was the Barbara Foss herself. Fortunately, the Foss asset had arrived in the port of Prince Rupert on Friday morning as part of the tug’s regular work, towing a cargo barge between Prince Rupert and Whittier, AK. The 126-foot, twin screw, oceangoing tug with Captain Marcel Ion in command, began making its way toward the Simushir, but heavy weather in Hecate Strait west Prince Rupert prevented the vessel from proceeding at full speed. Separately, two rescue helicopters and a surveillance aircraft stood by in case the 10 remaining crew members on the stricken vessel would have to be evacuated.

By 1830 hours, the 164-foot CCG patrol ship Gordon Reid had arrived and managed to get the freighter under tow. Even then, the operation moved by fits and starts. Though the seas had calmed somewhat, the tow line broke three times. Nevertheless, the stricken vessel was towed westward at 1.5 knots, and by Saturday, the ship had moved about 25 miles away from shore. By this time, the Simushir had drifted a total of about 20 hours. Meanwhile, the light 272-foot light icebreaker CCGS Sir Wilfrid Laurier and the USCG vessel Spar, based in the Aleutians, had time to arrive on the scene. SASCO America representative Ralf Bremsner was generous in his praise of the response effort. “I think the Canadian Coast Guard did a great job,” he said.

Responding the Foss Way
It was Saturday, October 18 before the Barbara Foss was able to reach the Simushir. When it did, Foss did not use the tow line between the Gordon Reid and the helpless vessel, instead, their towing specialists sent a messenger line across the bow of the Simushir. The Russian crew used the messenger line to hoist a synthetic emergency towline and chafing gear onboard. The Simushir crew made that fast on their bow and then the Barbara Foss connected her surge gear and towline into the other end of the synthetic emergency towline. In this case, they did not use an Orville hook, an emergency tow retrieval device. Coordinating with the CCG and Simushir’s crew, the Barbara Foss began its rescue journey using the Outside route around the North Side of Haidi Gwaii so as to sail with the prevailing weather.

By Sunday, Gary Faber, Senior Vice President of Foss Maritime, was able to report, “We’ve been working very closely with the Canadian Coast Guard and the Joint Rescue Coordination Center to successfully manage this situation. At this point, the ship is riding well behind the tug, and the weather and sea conditions are not posing concerns. We expect a steady and uneventful voyage to Prince Rupert.” And, he was right. It took a more than a day to tow the crippled freighter to Prince Rupert but the two vessels arrived there on Monday, October 20.

Response Trumps Salvage: Experience Counts
The Simushir incident was far from the first time that the Barbara Foss and Foss Maritime have found a solution to a tricky problem. Arguably – and especially in this region – it would be hard to find a private company better suited to saving the day. Foss resources, particularly in the Pacific Northwest, are substantial, with 200 multi-missioned tugs and barges. Saltchuk Resources, Foss’s marine holding and support company, also based in the Pacific Northwest, has $2 billion in assets in several business groups, including deep water shipping logistics; ship management; tug and barge operations; fuel distribution; trucking and air cargo.
Foss tug crews also have plenty of experience preventing oil spills. The Washington State rescue tug contract was once fulfilled by the Barbara Foss itself. The state of Washington requires that vessel to be capable of, “rapidly assisting vessels with propulsion and steering failures, structural casualties, fires and other problems. It can also escort high risk vessels, provide a lifesaving and spill response deployment platform during major casualties, and assist during salvage operations.” In other words, the perfect asset match for this particular casualty.

A quick count from the state’s list of ship rescues shows 23 incidents where either Barbara Foss, the Lauren Foss, or the Jeffrey Foss prevented disaster. The rescue tug has deployed to stand by or directly assist 49 vessels since 1999. But, emergency towing is just one of a broad range of services that Foss and Saltchuk offer. Preventing an oil spill fits in with the high standards for safety and environmental innovation Foss has set for itself. “Foss’ corporate color is green, which is symbolic because I believe it represents this organization’s thinking from top to bottom on the environment,” Geraldine Knatz, Ph.D., Executive Director for the Port of Los Angeles, said in 2007, after Foss built the world’s first hybrid tug, the Green Assist Dolphin, which relies on batteries and an active power management system to minimize engine use. Foss has also built a second hybrid tug, which is old hat compared to its latest groundbreaking project, one that would begin to eventually eliminate the need for petroleum bunkers: hydrogen fuel cells.

“At Foss we innovate,” says Gary Faber, the company’s president of global services. As such, Foss’s first Arctic Class tug will launch in December, 2014, followed by two more in future years. They will have low-emission Caterpillar engines and incorporate several environmentally-focused designs and structural and technological upgrades, including reinforced hulls that will allow them to sail safely through ice.

“We know the state and we know its waters,” Faber says. “Alaska is poised to grow as major new resource developments come on line, particularly on the North Slope. Foss is positioning itself to grow with Alaska.” All of that underscores the firm’s commitment to the environment, but also the need for robust response capabilities – in all domestic maritime regions. In this case, Foss was in position to obviate the need for what could have been a substantial salvage operation. An ounce of prevention really is worth a pound of cure. 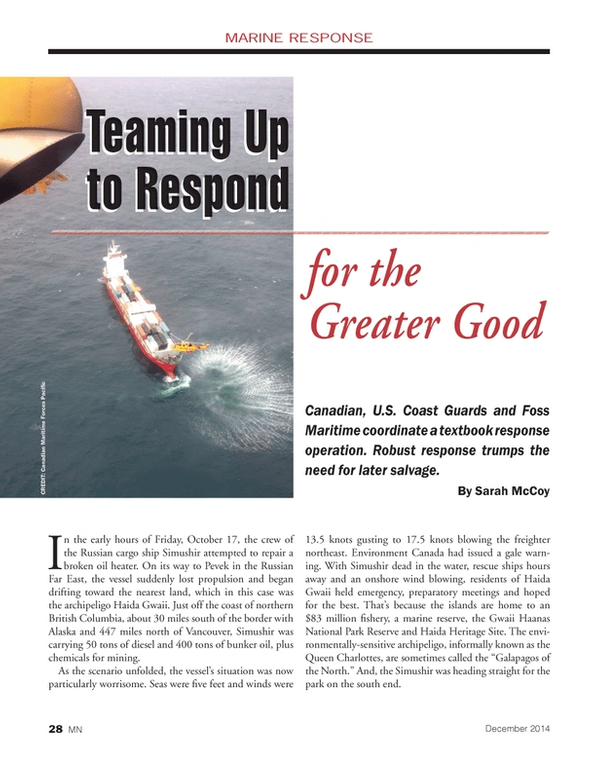