US Response Model for Salvage and Firefighting

As the dust settles on the 2014 implementation of the non-tank vessel response plan (VRP) regulations, the effective result is that all tank and non-tank vessels over 400 gross tons operating in US waters must meet the requirements of OPA 90, including the recently enacted Salvage and Marine Firefighting (SMFF) regulations. The SMFF regulations are the most prescriptive and stringent of their kind in the world and while only applicable in the U.S., the regulations are certain to have reaching international implications.
There are five primary SMFF service providers (the “Core 5”) that have been vetted by the US Coast Guard for providing SMFF coverage in all US ports. The majority of the world-wide operating emergency response salvage companies have representation among the Core 5 Providers. The implementation of these regulations attracted global players to the US market that previously had little to no presence.
Preparation for the implementation of the regulations demanded significant investments by Core 5 Providers in personnel and equipment and the continued maintenance of the required response posture for this regulatory compliance is substantial. Additionally, the stakes are raised for primary providers from a responsibility standpoint; the Core 5 Providers have a contractual obligation to respond to client emergencies.
Given the significant investments made and the increased level of commitment, most businesses would expect to realize a corresponding annual return. Many believed initially that this return would be in the form of annual retainer income charged to vessel owners to offset the increased cost and responsibility. Ironically, the opposite has happened. The draw of additional players into the U.S. market and the drive to capture market share has created a price war and has resulted in a significant reduction in overall retainer fees charged compared to pre-SMFF regulation levels. Currently, no retainer fees are being charged by Core 5 Providers for non-tank vessels. This is quite a remarkable outcome, especially considering that the number of U.S. salvage emergencies, the traditional source of revenue for salvors, continues to decline.
What is the reason for this tremendous inconsistency between investment and return? The simple answer is that the U.S. response market is very important to the world response market and service providers recognize this. For now at least, many providers are actually willing to subsidize their stake in the U.S. market for the greater potential of the global market. There is an emerging trend for vessel owners and operators to contract with response partners on a global basis, and the U.S. SMFF model with its pre-arranged contracts and funding agreements is gaining traction as a viable arrangement outside the United States. In order to have competitive access to this emerging global market, a Provider must be active in the US market.
It is inevitable that the future will see increasing implementation of SMFF-type regulations among other developed nations. As with the original OPA 90 regulations for spill response that set a world-wide precedent and triggered similar regulation processes in numerous other countries, it can also be expected that a similar tightening of SMFF regulations will occur in other nations. Serious salvors in the world market do not want to be left behind when this happens.
There are notable lessons learned from the SMFF implementation process. The bar for U.S. SMFF response provider capability has been raised to a high level. ‘Core 5’ Providers have leveraged this increased capability and profile to achieve direct success internationally. The American salvors are now routinely securing contracts for the largest salvage and wreck removal contracts around the world.
The American Salvage Association (ASA) has been the common voice for the salvage industry throughout the tenuous process of enacting the SMFF regulations. The ASA has gained tremendous insight throughout the entire development and implementation process of the SMFF regulations, and has also earned credibility and respect among all stakeholders including the U.S. Coast Guard. As the influence of the US response model grows internationally, the ASA is in a unique position to expand its horizons and provide guidance and insight on these processes in other countries. For example, recent activities of the ASA have included joint training sessions with the Panama Canal Authority and the Canadian Coast Guard. The American Salvage Association stands ready to share their guidance and insight on an international level. The simplest way to access that knowledge is as an active member of the ASA.
All stakeholders must recognize that the world is developing and times are changing. In the United States, the model has changed from opportunistic salvage to a fully developed response system. There should be no hesitation to utilize the SMFF capability during vessel emergencies. Not only is it the law, but as discussed above, this response capability is currently self-subsidized and needs to be exercised.   VRP’s should be activated without delay and professional SMFF providers called to the scene when emergency assistance is required. It only makes sense to engage the pre-contracted and U.S. Coast Guard approved experts during a casualty, but somehow this simple process continues to be met with resistance, or at least reluctance, from various segments of the industry and government. The Responsible Party is obligated to follow the approved VRP and the U.S. Coast Guard is obligated to enforce the activation of the VRP.
While the recent SMFF changes have occurred in the United States, all eyes are on the world market.  Like it or not, the US response model will have influence internationally and salvors are positioning themselves for this inevitability. In this regard, the ASA will continue to serve an important role for its members as the salvage response model evolves globally. 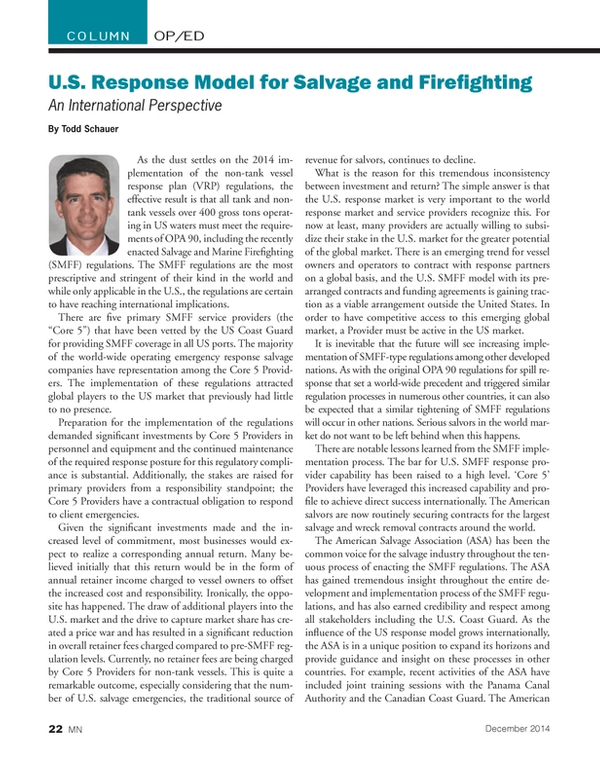 Read US Response Model for Salvage and Firefighting in Pdf, Flash or Html5 edition of December 2014 Marine News