As we close out yet another year, I am constantly amazed at how much things change on the waterfront and the boats that ply the adjacent waters. Similarly, I like to tell people that it was five years ago when, within a narrow six-month window, I purchased my first ‘smart phone,’ a vehicle with global positioning and took out my first satellite radio subscription. I now wonder how I got along without any of it.

Separately, the businesses of SATCOM and software are also combining to efficiently enable workboat operators and seafarers to better manage their businesses. To be sure, the inland and offshore support sectors were, in comparison to their blue water cousins, arguably late to the technology game. This month, we detail two different options for workboat operators to move their operational game to a higher level. Both efforts involve the use of different off-the-shelf, customizable software products. Each also relies on ship-to-shore communications to transfer that data back and forth. Workboat operators are catching up (and changing) quickly. Those who don’t run the risk of being left behind. Turn the page and find out why.

An ounce of prevention is worth a pound of cure. Yes: I think I have heard that said, once or twice. That adage is especially true when it comes to marine casualties. As part of the headliner for this edition, ‘response’ is just as important, if not more so, than the best salvage that money can buy. That’s because response doesn’t just mean ‘spill’ response or picking up the pieces after the damage has been done. It can and should involve preventative measures, robust assets to make that happen, and speedy arrival on-scene at a potential disaster to avert something even worse.

As the world of salvage and response continues to evolve, the lines between salvors and responders continue to blur. Not too long ago, the so-called Fi-Fi rules further defined the responsibilities of those who find themselves in peril and the people and businesses tasked with trying to solve their problems. The salvage community itself had a big part in moving those rules forward. Salvors the world over continue to up their game, and standardize what was at one time a business that few trusted and nobody really understood. That’s also changing quickly.
No one wants to see any casualty. That said; the reality of both response and salvage is that each specialty – for some, it is one in the same – involves high overhead and expensive assets that sometimes can lay idle for weeks or months at a time. What to do with those assets during slow times is sometimes the difference between business failure and a healthy bottom line. In this edition, we bring you not one but two completely different versions of how response providers can operate in today’s complicated operating environment. That, combined with savvy advice from senior salvage stakeholders, puts the exclamation point on this edition on our final edition of 2014. See if you don’t agree. 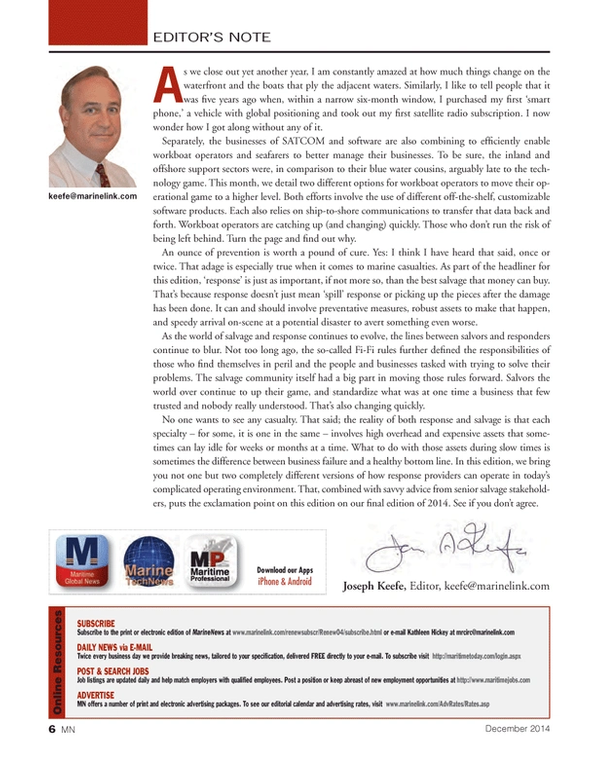