Battery based energy storage systems for marine applications are finally moving, cleanly along the global waterfront at full speed.

The UN Report on climate change on November 2, 2014, stated that the unregulated use of carbon based fuels must cease by the end of the century. While people can debate the causes of global climate change, this type of strong statement is increasingly familiar. The shipping industry is one of the largest consumers of carbon-based fuel, and as such, has great reason to be concerned. That said; from the ferries that transport people and fuel across rivers, to Offshore Support Vessels (OSVs), and a dozen other types of workboat hulls, commercial vessels are vital to the economy and security of the world.
For decades, marine architects and operations managers have made great increases in efficiency to reduce fuel consumption costs. A vessel built today is far more efficient than one that was built 20 years ago. Advances in computer modeling of hull shapes have lowered resistance in the water and composite materials or lightweight aluminum are being used where possible to reduce weight. Even the anti-fouling paint used on the hull, and the impact on a vessel’s performance, is taken into consideration.
In the engine room, newer engines run more efficiently and burn less fuel, due to advanced computer controls. Propellers are tuned for maximum efficiency, scrubbers are being used to further reduce pollution and LNG is being touted as the next big clean idea in marine fuel. But they all use carbon based fuel that, according to the UN, will soon be phased out. We do not currently have a “Flux Capacitor” like the one imagined in the movie Back to the Future, and until we do, we will be stuck with what we know. Or will we?

Lower Emission Electric Hybrids
Vancouver, Canada based Corvus Energy Ltd., a global supplier of battery-based energy storage systems for marine use, has engineered the world’s only purpose built, industrial quality lithium battery suitable for use in large commercial vessels. In fact, Corvus, founded in 2009, has a number of firsts under its belt: the world’s first hybrid Offshore supply vessel, the world’s first full electric passenger and car ferry, Europe’s first hybrid tugboat, and the world’s largest hybrid vessel ever. In 2015, Corvus will commission the world’s first LNG powered hybrid ferry.
We all know hybrids right? Aren’t they the weakling, underpowered cars you find outside coffee shops in Seattle? Not anymore. In fact, Corvus claims their batteries can outperform large diesel generators in bursts, they do not require ramping up to put out the power which is available any time it’s needed.
It is this instant, always on power: that’s what makes it so attractive to ferry operators such as Denmark-based Scandlines. They installed a 2.7MWh Corvus Energy Storage System (ESS) on board one of their 466 foot, 1,200 passenger ferries, Prinsesse Benedikte. They use the battery to provide spinning reserve, allowing them to remove one gen-set completely. This, combined with the ability to load level on the remaining generators, provided them with a 25% reduction in fuel consumption. The fuel bill for their first vessel is lower now than when they built her in 1994, and the vessel requires about 30% less maintenance due to the engines operating in their correct load range. And, Scandlines has converted another three sister vessels to Corvus hybrid and now has the largest hybrid ferry fleet in the world.
Another first from Northern Europe was the offshore supply vessel Viking Lady. Originally launched in 2009, she has been outfitted with various propulsion technologies in an effort to reduce fuel consumption and pollution. But, the vessel is a working OSV in the North Sea, so safety and reliability come first. Arguably the model for green power and technology, she is powered by dual fuel LNG diesel engines and uses a Corvus Energy ESS to provide the huge power bursts required to hold position while performing stationkeeping duties. Lightweight and modular in design, the Corvus system sits on the foredeck housed in a DNV-certified container and feeds into the vessel’s electrical system as needed. This allows the vessel to reduce the overall power output required by its generators and reduces the fluctuation of generator output/rpm in response to load.
The modular design of the system allows for expansion of the energy storage component as required. If the vessel changes duty and is used in a different operational capacity, the ESS component may be expanded or reduced as required. Moreover, from a system design perspective, a single propulsion system design may be used on a variety of different vessels to meet different needs. In the case of large fleet operators, the modular system could be deployed as needed and reassigned to a different vessel if the duty cycle warrants it.

Hybrid Propulsion – not just Noise
Hybrid propulsion technology is quietly making waves in other places, as well. Greener operations, fuel savings and/or the elimination of emissions are not the only reasons to go ‘hybrid.’ For example, maritime engineering consultant and frequent MarineNews contributor Bob Kunkel and his firm, Amtech, were recently employed to develop a lithium battery hybrid propulsion research vessel. The propulsion system developed by Northern Lights, BAE Hybrid Systems and Corvus Energy was introduced due to a request to reduce emissions and fuel consumption along with providing a quieter platform for collecting data and teaching. Built at Robert E. Derecktor shipyard in Mamaroneck, New York, the Spirit of the Sound hybrid application is being used as a platform for offshore wind farm maintenance where emissions at the farms will be an issue during construction. The research vessel is used to collect water samples and track marine life in Long Island Sound and the actual “noise” benefit of the silent propulsion system was not realized until sea trials were conducted and schools of fish and other marine life surrounded the vessel during its movements in and out of the harbor, without machinery noise or wake.

Zero Emissions Full Electric Power
While current battery technology is not capable of providing enough capacity for an extended trip, many of the commercial vessels being used today have short durations of run time followed by predictable periods of inactivity. A short run ferry is an ideal candidate for full electric propulsion; many ferries run for 20-30 minutes and are followed by a 10-15 minute offloading/loading phase. Indeed, the 2014 ship of the year, announced at SMM in Hamburg in September is such a vessel. Norled Ampere, built by Fjellstrand of Norway, is powered by a Corvus Energy ESS. Fully battery electric powered, she has no generator on board. The solution is, in a word, elegant in its simplicity.
Due to issues in the local grid where the vessel was operating, there was not enough power available to ‘quick charge’ the batteries after each crossing. Upgrading the local utility grid was deemed time consuming, disruptive and very costly. The engineers at Corvus realized that a battery-to-battery transfer of energy would be far more efficient. In this way, the system would be separated in three parts: an ESS on the vessel, and a shore station on each side. The shore stations are used to fast charge the vessel. When the vessel leaves the dock, the battery then slowly recharges from the grid. With the 30 minute crossing, 15 minute unloading and loading, then another 30 minutes return trip, the battery has ample time to recharge at a slower rate, which is easily handled by the existing grid infrastructure.
With a shore station on each side, the vessel battery is fully recharged after each crossing and maintains reserve for additional crossings. Should a power failure occur on either side it is possible for Ampere to recharge on one side only and maintain service without disruption. The Ampere replaces an existing steel monohull design, using diesel mechanical drives with the new Zerocat design. As the name implies, the Zerocat is a catamaran, 260 feet long and is built from aluminum. The owners expect to earn a rapid return on investment from the vessel due to the fact that their operating costs for fuel are now zero. The vessel she replaces burned more than 260,000 gallons of fuel per year and, due to its age, was considered a high polluter. The propulsion system now requires no maintenance as the battery pack and other components are fully computerized, maintenance-free units, providing further advantages to the owner.
Building better, faster, more efficient vessels is not new. It has been happening since the first vessels were launched thousands of years ago by our ancestors. The application of diesel electric motors to vessels is not new either; it’s been widespread for more than 20 years. Adding a lithium battery IS new, and while it is still early days for the use of battery hybrids in commercial marine, the trend is certainly growing. Where else can you find an innovation that reduces costs, increases safety and reliability and also reduces emissions to zero? 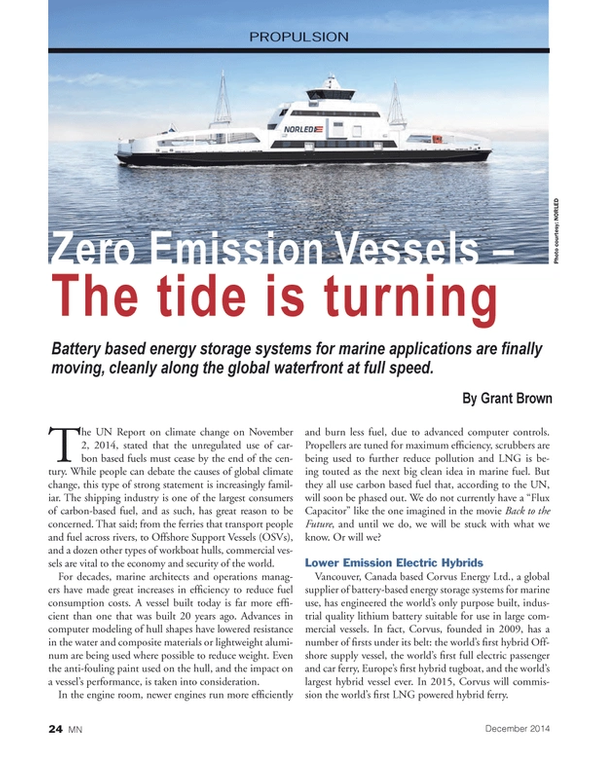