Cold and Calculating: Dealing with Ice in Domestic Waterways

Ice, snow and extremely low temperatures can put a big chill on maritime operations in ports, lakes, rivers and waterways. Thanks to the U.S. Army’s Corps of Engineers Cold Regions Research and Engineering Laboratory (CRREL) in Hanover, New Hampshire, mariners have a better understanding regarding phenomena such as icing on superstructures, brash ice and propulsion systems and controlling ice dams. And, while CRREL scientists are at home in the highest polar latitudes, it’s also true that a lot of its work takes place in the “lower 48,” where cold weather can put a crimp on waterborne commerce.

Icing
Ice is a natural material. But it has almost magical properties. It can appear and disappear; and can change its shape and physical characteristics. Superstructure icing is a significant problem for ships and other craft in the Great Lakes. Lakers can ice up in storms, and icing on structures and decks can render infrastructure unusable and vessels unsafe. “Superstructure sea spray icing and atmospheric icing from snow, freezing rain, freezing drizzle, rime, sleet, and frost reduce the safety of offshore platform and boat operations,” says Charles C. Ryerson, Ph.D., a research physical scientist at CRREL.
Sea spray icing comes from lofting drops from the wind and wave tops—from cloud mist to large raindrops. Offshore supply vessels, fishing trawlers and other commercial fishing vessels, tugs and other work boats can be especially susceptible to icing because of their low freeboard, exposed deck equipment, and their seakeeping characteristics in heavy weather. “Smaller vessels interact more vigorously with the sea and thus create more spray and more icing,” says Ryerson.
The problem exists on the ocean and on inland waters, but there are differences between salt and fresh water icing. For example, superstructure icing forms more rapidly in the Great Lakes because it is fresh water freezing at a higher temperature (0 deg C) than salt water (about -2 deg C). “Fresh water ice is much harder, denser and adheres to superstructures more strongly than saline ice,” Ryerson says.
CRREL has studied various ways to prevent or remove ice buildup and provide more stable ships and safer work areas. “Heated decks, coatings that cause ice to adhere less strongly to surfaces, tarps and covers, pressure washers, chemicals to loosen ice, expulsive systems, and inflatable boots can work, but each technology must be tailored for specific areas of the ship tolerant of that technology,” explains Ryerson, adding, “And, of course, avoidance.”
Most often, ice is removed the old fashioned way, using mallets, baseball bats and shovels. In addition to vessels, bridges, piers and other structures can be affected by ice and icing. Both fresh and salt water ports and harbors are at risk. Smaller boat harbors are vulnerable. Ice can lift piles completely out of harbor bottoms, and shove harbor structures off their foundations. New harbors should be designed and built to control ice’s harmful effects.

CRREL Produces Tangible Benefits
The Hanover facility is a world-class laboratory to study the effects of low temperatures. That’s useful when investigating the phenomena associated with icing. CRREL has produced reports for what used to be called the Mineral Management Service (now called the Bureau of Ocean Energy Management), focused on the effects of icing on oil and gas platforms. Ryerson created a decision matrix of what areas would be affected versus the type of ice and came up with a tool that would be useful for ice management in the most effective manner to maintain safety and operational efficiency.
The lab’s hydrology and hydraulics (H&H) work includes significant research into the physics of river ice processes; developing models and simulation tools; how ice affects hydroelectric production; the impacts of ice forces on structures and vessels; the impact of ice on locks and improving ice jam flood control. Much of the work involves design and prevention, and much is aimed at mitigating the impact after the ice occurs. Ice jams can prevent traffic from passing, and can cause both high and low water issues and flooding if not dealt with promptly and properly.

Locks, Jams and Dams
The Coast Guard is responsible for icebreaking to keep inland lakes and waterways open to vital commercial vessel traffic, such as coal and taconite shipments on the Great Lakes. Locks are closed after the season ends and no further ships are scheduled for the season, but ice can form that impede navigation (before the locks close), requiring ice breaking to open and maintain channels.
Leonard Zabilansky, a research civil engineer, says CRREL’s physical digital and physical models help vessels navigate the Great Lakes and river. “We’re improving the winter performance of locks and dams, and managing the ice accretion that can narrow lock openings. Sometimes we have ships that push the ice into the lock ahead of it, and we have to ‘ice’ the lock, to open the lock and clear the ice before we bring the ship through. We’re looking at bubbler screens, lock wall coatings and heated gates to keep the locks operating in winter.”
CRREL’s ice jam database catalogs ice jam information that can be used to predict and prevent ice flooding. “Ice jams accumulate in the same general areas, and we can build ice control structures to that store ice upstream of problematic areas that minimizes flooding,” Zabiliansky says, adding, “We basically take ice out of the river and put it in storage.”
If an ice jam is allowed to accumulate and freeze it will block the river and impeded spring discharge and it can block traffic on navigable rivers. Ice moving downstream can create ice dams that clog channels, clogging waterways while backing up the water and causing flooding. Zabiliansky explains, “The ice creates a ridge. The velocity of the river delivers ice into the ridge, but there’s no velocity to deliver the ice out.”
In the lower Great lakes, ice breaking can be required to break ice dams which can cause flooding behind the blocked waterway.  In some cases, the ice dams are beneficial because they can hold back ice flow. It gets even busier during the spring breakout. Ice can be five feet deep, yet there can be open water nearby in a channel. When the ice begins to break up, very large “plates” of ice can break free and start moving, creating a dangerous situation.
Coast Guard ice breaking tugs work open channels on rivers like the Kennebec in Maine, where Bath Iron Works builds ships, and the Penobscot, which leads up to Bangor, as well as keeping a channel open on the Hudson River to allow heating oil to be delivered the Albany, NY area.

Test Facilities
As the Coast Guard plans for an increased Arctic presence, it is looking at vessels that are not designed to break ice but may be capable of operating in the presence of brash ice.  Tugs, work boats and small craft in fresh and salt water environments in any maritime area with extreme cold temperatures may find themselves slogging through slush.  The Arctic and extreme latitudes presents unique challenges to USCG operations with cold temperatures, a range of ice conditions, and a lack of infrastructure to support small-craft operations. To best understand how brash ice affects boat propulsion, CRREL engineers and scientists have studied the range of operating conditions for current craft, how to modify or improve current craft, and how the next generation of craft may be more suited to these cold operations.
Zabilansky says the CRREL’s three ice engineering facilities—test basin, flume and research area—permit a wide range of environments to be created or simulated to test systems in different conditions and validate computer models to improve simulations. “We use the test basin for testing ice forces on structures, mobility, ship dynamics, and the interaction of a structure in floating ice. The flume is a rectangular river that is more for sediment transport and frazil ice control, and the research area is a large refrigerated space for all kinds of icing studies. We can make and blow all kinds of snow and freezing rain,” Zabilansky says.
“We try to replicate the freezing process and the physics of the removal process. If you don’t test for the right things under the right conditions, the right type of ice forming with the proper adhesion properties on the substrate, and then test it in the manner that it’s going to be removed, such as with hitting it with a baseball bat or whatever, shaking a tarp, or whatever – then you’re wasting your time.  Because you’re testing for something that may not ever happen,” Zabilansky says.
CRREL has studies brash ice and how it affects powerplant coolant intakes and propulsion systems. Beyond this, CRREL has conducted much of research with frazil ice freezing up the “trash racks” that strain debris from entering the hydroelectric turbines in dams. The turbines have a grating system so that large objects don’t get into the turbines that can accumulate frazzle ice. Super-cooled water forms ice crystals, but the water is moving so quickly that it can’t congeal into large pieces of ice.  When it accumulates on the trash racks and grows, it eventually clogs and reduces and stops the flow.
CRREL research has examined the range of speed and brash ice conditions (i.e., thickness) in which a conventional, propeller-driven small craft can operate. The lab also examined outboard propeller shrouds and waterjet intake systems to determine how best to protect the propellers from ice impacts.
Zabilansky says propeller-to-ice interaction is an important factor to consider for small craft operations in ice-covered waters. “The impact of ice on propellers threatens the integrity of the propulsion system and decreases efficiency because more torque is needed to produce the required thrust.”

It’s Cold Up There – and Down Here, too
When mariners and operators think of cold weather operations or ice navigation, they typically conjure up images of the Arctic in the winter months. But, that sort of thing can and does happen in the ‘lower 48’ as well. And, that’s why the U.S. Army’s Corps of Engineers Cold Regions Research and Engineering Laboratory is so important. That’s not going to change any time soon. Thanks to CRREL, however, the way you navigate through cold weather, ice and freezing precipitation just might. 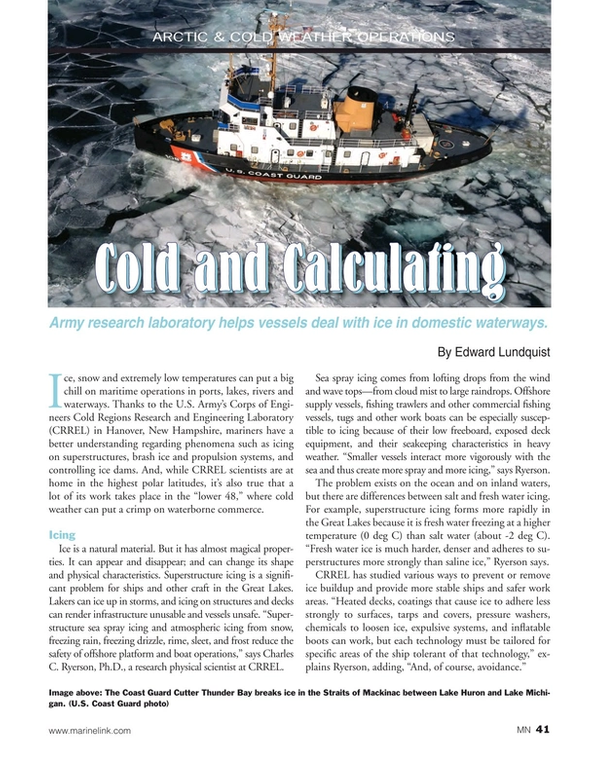 Read Cold and Calculating: Dealing with Ice in Domestic Waterways in Pdf, Flash or Html5 edition of January 2015 Marine News