Our country’s past and its future are fundamentally linked to the transportation of people, vehicles and goods over our lakes, rivers and sea.

Nationally, nearly 50 million people and more than 18 million vehicles travel on Canada’s ferries each year. When compared to the air and rail travel industry – which transport 50 million and 75 million passengers respectively, according to their recent data – ferries are very clearly an important part of the transportation scene in Canada. Every day, ferries bring tens of thousands of people to work, tourists to their destinations and goods to isolated markets.  Indeed, there are places in Canada where ships are the only link to the mainland and all goods need to be moved by ferries, including daily necessities like food and fuel.

Ferry operators provide constitutionally mandated services, the only access to some communities, linkages between parts of major urban centres (such as in Vancouver, Halifax), access to some airports (Toronto and Prince Rupert), and crossing of various waterways. Whether you are traveling across the Georgia Strait to Vancouver Island, voyaging across the Bay of Fundy from Digby to Saint John or commuting to work from Lévis to Québec City, Canadian ferry operators are responsible for getting you there.

Growth in Canada’s ferry industry doesn’t just stop at ridership. Ferry operators are poised, in the next five years, to make significant investments and upgrades to their fleets. Some are purchasing new vessels while others are retrofitting and upgrading older vessels. That’s on top of directly and indirectly providing meaningful employment to more than 20,000 Canadians.

While investments in capital and human resources are a measure of the importance of the sector, what is more difficult to measure is the economic impact of ferries on communities, businesses and residents. Without ferries, some communities would be unable to get crucial goods such as food and fuel while others would need to have these goods transported by trucks with detours of hundreds of kilometres in some situations.

Our ferries are always working toward a greener tomorrow and looking for ways to minimize their carbon footprint. Now, more than ever, we are seeing innovative technologies – such as LNG-fuelled vessels – being developed to help ferry operators achieve this goal. These new investments will reduce fuel costs and help keep the price of fares low while reducing carbon emissions by up to 25%.

LNG has been heralded by major players in the industry – including BC Ferries CEO and President, Mike Corrigan, who recently said it would be a “game-changer” for the country’s largest service provider. “After labor, our biggest operating cost is diesel fuel,” Corrigan explained in late 2014, adding, “We believe LNG is the fuel of the future.”
Canadian operators have ordered 8 new LNG ferries and are taking steps to convert 2 existing ship to LNG.  This includes:

Canada’s ferry industry is well-positioned to become a world leader in using LNG technology in their vessels. Already, tucked away in Île Verte, Québec is North America’s first hybrid ferry. Operated by Société des Traversiers du Québec (STQ), the MV Peter Fraser moves approximately 20,000 passengers and 5,000 vehicles a year. This vessel is a prime example of how ferry operators in Canada are leading the way in maritime environmental stewardship.

Annually, ferry operators in Canada gather to discuss issues related to our industry and share best practices.  The theme of our upcoming conference, Cutting Edge: New Technologies in the Ferry Sector, could not me more timely. We encourage you to attend and showcase your products and services to ferry operators in Canada. To register, or for more information, please visit: www.cfoa.ca/conference. 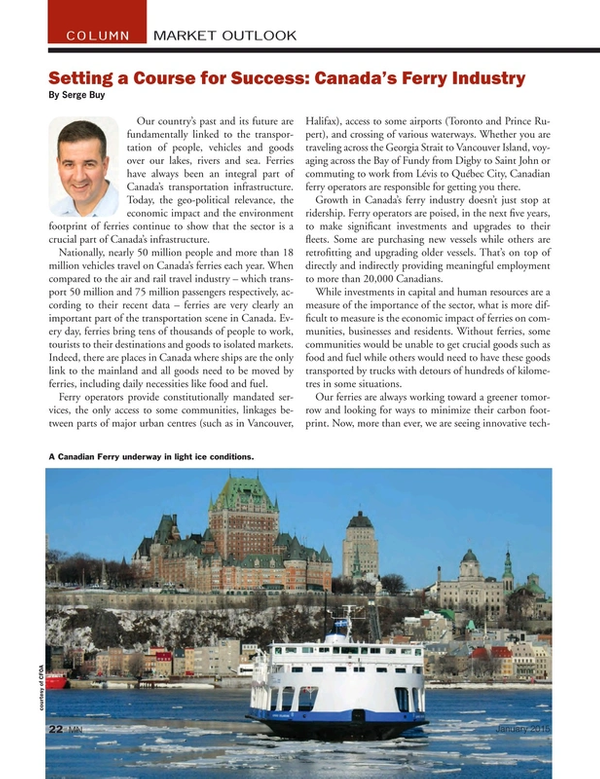