Taming the Arctic, One Ferry at a Time

With its network of islands and fjords, rugged mountains and spectacular tidewater glaciers, Alaska’s Inside Passage may make a perfect summer cruise destination, but locals can’t choose when they travel. So when Alaskans need transport, the Alaska Marine Highway System (AMHS) must find a way to move them. For the past eight years, the ferry system has been planning replacements for mainline boats that are over 50 years old. Now, for the first time, the state of Alaska has commissioned new ferries that will be built at home. They will be the largest ships ever built there. And, not a moment too soon.
Vigor Alaska won the contract and identical twin ferries are being built in Ketchikan for $101 million. The keel equivalents were laid by December, 2014. Designed by Seattle-based Elliot Bay Design Group (EBDG), the two ferries will go into service along the Lynn Canal route between Juneau, Haines and Skagway. Lynn Canal is not a man-made canal but a fjord, which, at about 90 miles long, is one of the deepest and longest fjords in the world.

Logistics and Performance: rolled into one
Vigor will deliver the pair of 280-foot ferries in 2018 on a stretched-out schedule designed to keep costs down. The ferries will be built as Day Boats that operate on a 12-hour schedule. Without the need for crew quarters, the AMHS will reduce capitol and operational costs. Having two identical boats also helped offset design costs. At 280 feet, shorter in length than the ferries they will replace, the new Alaska Class boats will eventually take over from 350 to 400-foot ships. Each new ferry will have seats for 300 passengers, plus carry 53 vehicles. The beam will be 67 over guards, the draft 12 feet, six inches, with a 3,013 LT full load displacement.
Doug Miller, New Vessel Project Manager for AMHS, said that “Vessel One will have a schedule speed of 15.5 knots for the route between Juneau and Haines and a predicted sprint speed of 16.4 knots at 100% MCR (maximum continuous rating of the horsepower of the engines installed).” To achieve those goals, two EMD 12 cylinder engines at 3,000 horsepower will propel each vessel. Each ship will have two controllable pitch propeller systems made by Rolls Royce. Each ferry will have a bow opening door and bow loading ramp.

Ferries: by Design
When it came time to put pen to paper, AMHS chose the Elliot Bay Design Group, naval architects who frequently design ferries. And, why not? Over time, they have planned everything from a new, unnamed ferry for the Nantucket-Martha’s Vineyard-Woods Hole route, up to the giant Staten Island ferry, a 4,500-passenger behemoth. Beyond this, EBDG has also designed ferries for Washington State, North Carolina and Texas. EBDG has offices in Seattle and New Orleans and in 2013 opened a new office in Ketchikan. Together with Vigor’s growing Alaska footprint, the project has taken on a distinctly Alaskan feel.
Weather can never be far from mind for naval architects, particularly when it comes to Alaskan weather. The Gulf of Alaska generates a fire hose of heavy rain and snowstorms that inundate southern Alaska. In the winter in Lynn Canal, daylight shortens to six hours. Winter winds blow at 40 miles per hour or above several times each month and temperatures can drop to minus five degrees Fahrenheit. Ferry captains find themselves battling freezing spray.
“Lynn Canal is part of the Inside Passage but it’s a pretty large body of water and it’s pretty prone to weather conditions, as much of Alaska is,” said Vigor’s Adam Beck. “Some of the big challenges that they deal with are not only the heavy seas, but high winds and freezing spray, where the spray is coming off of the ship, coming off of the bow. It tends to freeze on contact.” Beck continues, “When they originally came out with the smaller ship concept, the cars were just on an open car deck. There was a lot of public concern that folks would come out to get in their cars and the cars would be blocks of ice. So the state went back and made a pretty significant change and enclosed the car decks.”
When weather turns nasty, the ferry system must consider what it calls “Traveler Comfort.” As part of the design process, the ferry system and EBDG did wave-tank testing of the hull design in Denmark. Miller of AHMS said that the hull form was tested in Denmark at Force Technology.
“Force worked with Elliot Bay Design Group to perform numerically based optimization on the hull form.  A model of this optimized hull form was then created by Force and tested to confirm numerical based performance predictions, analyze the vessel’s sea keeping characteristics and predict maneuvering characteristics,” Miller said, adding, “The goal was to design the vessel capable of handling the forecasted vehicle and passenger loads in the future, and reduce the Motion Sickness Incidences that are found on the smaller vessels.”
There are myriad variables to consider. “The overall vessel length impacts the motion of the vessel in waves, and the effect of those motions on the passengers, crew and vehicles. The weather data for the area was used and the Motion Sickness Incidences was forecasted to estimate what percentage of the passengers would feel ill over a two-hour period in the most exposed area. These tests were run on several models to determine the overall length and used as a comparison to other ships in our fleet,” Miller said.
The design led to a 280 foot vessel. The flare above waterline, as well as the bulbous bow shape, were carefully developed to minimize slamming forces in heavy seas. The passenger spaces were arranged to provide more space in the midship area of the vessel for passengers to gather during rough seas. With these results, EBDG designed the ferries’ hull and bow shape to minimize spray generation and fore body slamming. Controllable pitch propellers will maximize maneuverability and efficiency.
Though many ferry systems have begun to use catamarans for speed and stability, Miller said, “We have two aluminum catamarans in our fleet. They are fast, but in rough weather they have limitations due to pounding when the waves hit the wet deck between the two hulls.” For this reason and many others, and in the Lynn Canal, the ferry system has chosen a monohull.

Home is Where the Money Is
Recently retired Governor Sean Parnell redirected federal money away from ferries in order to allow the state build the new boats at home. Securing the contract was a coup for Vigor Alaska, but it didn’t come easy. “All along, the state was very clear,” said Vigor’s Beck, adding, “We had to give them a competitive price. I would characterize it as a challenging negotiation with the state of Alaska. By challenging, I mean: this was not an easy contract for us to win. We really had to sharpen our pencil over and over and over again to get there.”
Among other things, Vigor stretched out the construction timeline. Longer lead times will allow Vigor to charge lower labor costs. While Vigor operates the shipyard, it is actually owned by Alaska Industrial Development and Export Authority, a public corporation created in 1967 by the Alaska Legislature. Vigor acquired the right to operate the shipyard in 2012. “The Vigor Alaska shipyard, the people of Alaska, and its elected officials shared the same goal of keeping tax payer dollars in the state and supporting family-wage jobs,” said Beck.
Joe Corvelli, Vigor Industrial’s Sr. Vice President of Fabrication and Sales, said that Vigor’s experience building ferries for the state of Washington helped it procure the Alaska Class ferry contract. “In the Seattle yard, we’re now on our second class for building ferries for them. There’s a wonderful sort of momentum around building ferries. Again, now both in Alaska and in Seattle, and we’re seeing a national interest and we’re becoming known as ferry builders across the nation.”
The Ketchikan yard has a 130,000 square foot ship production facility designed from the ground up to build ships upwards of 500 feet in length. It includes an adjacent five-story production center to minimize material flow and maximize efficiency.
It rains 13 feet a year in Ketchikan. Beck said that the shipyard has been upgraded so “fortunately, much of the work is now indoors. We actually experience very few overall project delays due to weather. Again, by employing resident Alaskans who are accustomed to working in extreme conditions, we are able to perform high quality ship maintenance and repair work in Ketchikan, Seward, and remote locations across Alaska. Our people have developed a whole host of very unique production processes to overcome working in wet, windy, dark, and remote locations. I would like to tell you what they are, but those are Vigor’s competitive advantage for working in Alaska,” Beck said.
The Ketchikan shipyard has already built to suit for the unique challenges of Southeast Alaska. Back when it was Alaska Ship and Drydock, the shipyard built the one-of-a-kind ice-capable M/V Susitna. The 194-foot Susitna was built for about $75 million as a prototype for possible use by the Navy. Beck emphasized that workers are multi-skilled and cross-trained so that they can work steadily all year. With the Alaska Class Ferry project, Vigor’s local workforce will expand from 160 to about 250.

Alaska’s Emerging Arctic Markets
Beck said that Vigor is looking ahead to more work in the near future. “It’s the upcoming Arctic and what’s known as OCS, oil and gas exploration. We see both of those as a very emerging market, repairing the ships that will be operating in those areas. Particularly not just the Arctic in terms of the shipping lanes that’ll be used more and the upcoming Beaufort and Chukchi Seas as a new market.”
The precise timing, Beck admits, remains to be seen. “They’ve got some final permitting to get in place, but it’s looking like things will start in the summer of 2015. There’s already vessels that have been in the waters there, some even in the Pacific Northwest that we have already begun working on.”
Asked to name the projects, a Vigor representative would only say, “We have been working with several companies on RFP’s, but we cannot disclose details of those projects as we have signed non-disclosure agreements.” The expanding Northwest résumé of this growing, Pacific Coast-based builder will likely help build that already substantial portfolio and backlog even further. Not even the cold, icy weather of Alaska’s Arctic environment can stop that. 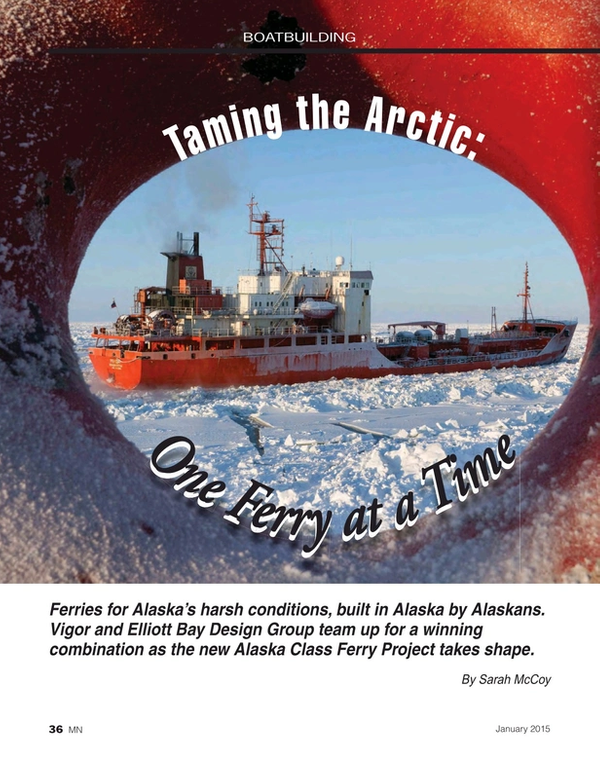 Read Taming the Arctic, One Ferry at a Time in Pdf, Flash or Html5 edition of January 2015 Marine News