Ferry Safety in the Developing World

A convergence of forces makes for market opportunities for new safe ferry systems in the developing world. Need, policy, and funding are poised to provide a moment of opportunity.
The expanding global economy has resulted in economic and population growth in developing world cities, resulting in horrendous road congestion. In response, governments and businesses have begun planning for intra-urban ferries wherever possible. Ferries in the developing world have a deserved reputation for being unsafe. A recent in-depth study commissioned by the Worldwide Ferry Safety Association found that that since the year 2000, there have been over 160 accidents causing 17,000 fatalities; the vast majority—95%—of these accidents occurred in developing nations. That said; the resources exist to “do ferries right.”

WFSA: engaging global ferry stakeholders
The Worldwide Ferry Safety Association (WFSA) has been engaged in this arena throughout the past decade. WFSA is a not-for-profit spinoff of the joint ferry safety project between the International Maritime Organization (IMO) and Interferry, the international ferry association. The WFSA tracks ferry fatalities and their causes, commissions research, is developing an e-training program, advocates for ferry safety internationally, and sponsors an international student design competition for a safe affordable ferry.
To develop the design competition, WFSA works with key officials in a chosen country to prepare the specifications for the ferry’s route, route characteristics, such as controlling depth, number of passengers, stops, projected journey time, and cargo if any. Student teams that register with WFSA are given terms of reference regarding the level of detail needed. Students have been solicited from maritime institutions all over the world, and the competition has attracted teams from schools in China, Turkey, India, Greece, Germany, France, Belgium, Australia, and the United Kingdom, not to mention the U.S. and Canada. Each year, as many as thirteen student teams initially register, but only six or seven teams stay the course and actually have completed designs.

The Competition
An international team of five professionally prominent judges, based in the United States, Scotland, Bangladesh, and Papua New Guinea, select the winning designs. Interestingly, many student teams took it on themselves to address the problem of overcrowding by designing their vessels to be safe even if substantially overcrowded. There were many variations presented in terms of hull shape, site-specific safety features, and fuel type employed. Some of the most creative vessels were unfortunately not appropriate to the situation, but could work elsewhere. For example, the Webb Institute team’s vessel could be expanded to handle variable numbers of passengers with an insert like the leaves of a table.
In 2014, the competition was specified for an oceangoing ferry with a carrying capacity 200 passengers and ro-ro cargo between Lae on the main island of Papua New Guinea to Kavieng on an outer island via two stops over a transit distance of 700 NM. This vessel was a surrogate for a host of other needed inter-island ferries for the South Pacific.
After deliberations, the judges concluded that the student team from Newfoundland’s Memorial University won the competition for their design of a double-hulled vessel using such affordable features as mild (low carbon, readily wieldable) steel, standard components, and a chined hull (method of attaching the bottom to the sides), all of which allow for simplified construction. The design calls for diesel electric propulsion, which, while somewhat more expensive to acquire, is expected to be cost-effective in terms of fuel consumption and maintenance savings. The Newfoundland team, which received the top prize of $5,000, was led by Edward Moakler, with teammates Logan Miller, Nicholas Boyd, Luke Hancox, Bethany Randall, and Aron Ng. Dr. Heather Peng served as faculty advisor.  University of British Columbia students were awarded second prize with Nantes and Bremen student teams were third prize awardees for a total of an additional $5000 in prizes.
In 2013, the competition to design a 500 passenger ferry for Bangladesh river travel between Dhaka and Barisal, a distance of 250 miles. The winning team was University of British Columbia with the runner up Tolani from Pune (near Mumbai) India. The UBC vessel was designed to run on CNG and featured outstanding workmanship in the design effort.
Running the competition over the course of two years, WFSA has discerned from conversations with professors and students that we should make some modifications. These include streamlining the terms of reference to markedly reduce many of the calculations that aren’t significant to the final result, but also use up time and resources which may have discouraged teams from going forward. Additionally, and responding to the academic schedule, we will start the competition earlier in the academic year (instead of January 1).
Regarding research, WFSA and the competition organizers have commissioned in depth analysis on issues and nations by students from leading maritime and academic institutions. In addition to the in-depth report and analysis of global ferry fatalities over the past fourteen years, we have obtained reports on ferry systems in the Philippines, Guizhou, China, the Amazon and Tanzania-Zanzibar. We will shortly post our commissioned paper on e-training for the ferry industry, and have papers in progress about the ferry systems of Indonesia and Bangladesh.

Training
One of the issues that surfaced from our two trips to Dhaka was the lack of crew training. To address that, members of Interferry contributed their expertise to create a course based on Bangladesh needs as communicated by the Director General of the Bangladesh Shipping Department. IMO contributed resources for Videotel to prepare a professional presentation. Interferry paid for the translation, salaries and food for the crew and teachers over the two days each time the course was given. The course, presented in PowerPoint format, was trialed successfully in Bangladesh with 100 crewmembers, administered twice to classes of 50 seafarers each. Learning that owners would not pay to have crewmembers take the course encouraged us to look for other ways to supplement hands-on training. WFSA therefore explored ferry safety training by owners and vendors. We will shortly report out as well, as we begin a new trial using a distance learning, e-training system.

Where’s the Money?
So, where’s the opportunity for a business market beyond the resources of the developing nations themselves? Most of the nations and cities that could use more and better ferries know that they need them – we know that by direct communication as well as tracking their reports and releases. With growth they have more resources than in the past.
But the true promise to jumpstart ferry service could well be through the $175 billion Multilateral Development Bank fund for sustainable transport in developing nations. The eight banks, African Development Bank (AfDB), Asian Development Bank (ADB), Development Bank of Latin America (CAF), European Bank for Reconstruction and Development (EBRD), European Investment Bank (EIB), Inter-American Development Bank (IADB), Islamic Development Bank (ISDB) and the World Bank (WB) have pooled their resources for the ten-year effort which is currently in year three of its development. It is not clear at this point what the criteria might be for selecting projects, but from all indications, there is clear recognition of the positive sustainability features of non-road transport solutions.
In a parallel effort, the UN Secretary-General Ban Ki-moon in August appointed a High-level Advisory Group on Sustainable Transport, whose role is to review and recommend policy options for sustainable transport particularly for developing nations over the coming five-year period. The ferry sector is represented on the twelve-member panel by Len Roueche, Executive Director Interferry. WFSA Executive Director Roberta Weisbrod will second Interferry on this panel.

Looking Ahead, Getting Involved
How can industry get involved in the market place for safe ferries for the developing world? One way is to first dial into the News section of the WFSA website: www.ferrysafety.org. Another would be participate in the upcoming Ferry Safety and Technology conference where we will discuss pushing the envelope on ferry design, materials and construction, as well as technology advances in e-training, weather & wave information detection and dissemination, and advanced personal communications for ferry safety. The conference will be held April 16-17, in New York City and is being co-sponsored so far by Interferry, Society of Naval Architects and Naval Engineers (SNAME), and the Transportation Research Board (TRB). Contact [email protected] for more information. 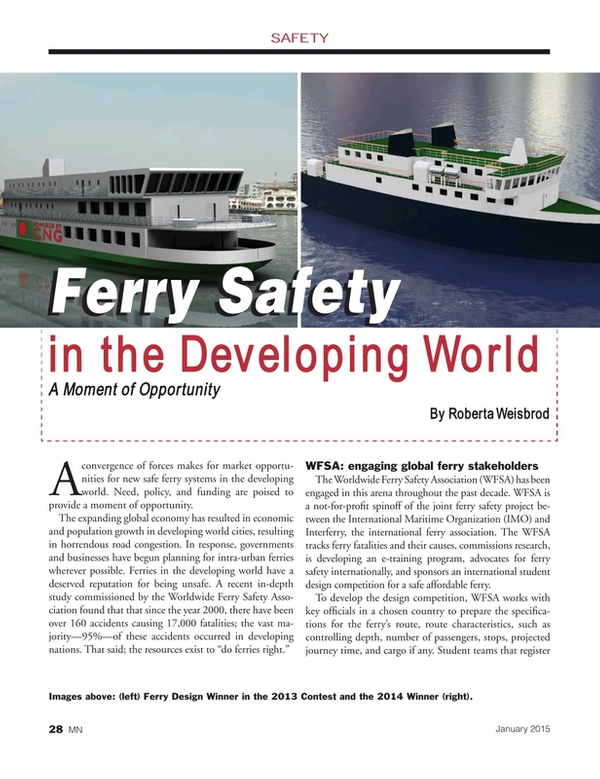