US Ferries Are Safer, but Regulatory Burdens Grow

In recent years, ferries have been in the spotlight, in part because of growing mass transit needs and increased road congestion, but also because of concerns about the deadly South Korean ferry sinking last April. We asked Captain Terri Bernstein, the Passenger Vessel Association’s 2014 President, about the industry’s status in the United States. Based in Alexandria, VA, the PVA has over 500 member companies. Ferries are safer, especially since 9/11, but regulatory requirements have swelled and can be onerous, Bernstein said. She’s the owner of BB Riverboats, Inc. in Newport, Kentucky, and is a Coast Guard-licensed mariner with a 100-ton captain’s license.
“We’ve seen an increase in building new vessels, an increase in routes and in new areas of the country served by ferry vessels,” Bernstein said last month. ”These are indicators that the ferry industry is experiencing solid growth.”
Ferries whisk commuters to work and reduce highway, bridge and tunnel accidents. “As our roadways become more and more congested, the role of ferries in our nation’s comprehensive transportation network increases,” she said. “Ferries provide important services to communities in major metropolitan areas and also in more remote locations across the country.”
According to the most recent federal data from the Bureau of Transportation Statistics in 2010, U.S. ferries carried nearly 103 million passengers and 37 million vehicles in 2009. “I believe that the results of the 2014 National Census of Ferry Operators by the BTS will show a substantive expansion since then,” Bernstein said. That report is being finalized this winter for release next spring. In the last survey, the highest ferry ridership was in the western and northeastern United States.

Korean sinking raises awareness
Bernstein said the mid-April 2014 sinking of the MV Sewol ferry in South Korea was tragic and of great concern to her as a marine professional. The disaster claimed 304 lives, mostly secondary school students. “We were asked several times if an accident like this could happen in the United States,” she said, adding, “We hope that it never does and understand the importance of learning from the disaster. We must remain vigilant and strive for continued improvement in our emergency preparedness, particularly in crew training and exercises and in communications with our passengers.”
Overall, U.S. ferries have a long record of safe operations. “The industry places systematic emphasis on sound risk-management practices and a commitment to safety,” Bernstein said. “Ferry operators focus on implementing organization-wide training programs and best practices that aim to prevent accidents before they occur.”
Bernstein told MarineNews in December that PVA is developing a safety management system called Flagship. “It’s a framework around which we can structure our current processes and procedures. It provides a focal point to direct our attention to preventative maintenance and continuous improvement. My company has been beta testing the new Flagship program, and we’ve found it to be of immediate benefit.” She added that the success of any safety-management system depends on an organization-wide commitment to it.

Security increases after 9/11
Ferry security has been beefed up in the last decade or so. “Since the terrorist attacks of September 2001, PVA has worked closely with the Coast Guard to promote the need for workable security measures on U.S. ferry vessels,” Bernstein said. “The Coast Guard has provided security-related information to PVA members on many occasions, including articles in PVA’s “FOGHORN” magazine and presentations to our national conventions and regional meetings.”
PVA and the U.S. Coast Guard established a ferry security working group, developing best practices with operators around the country. “PVA worked with the Transportation Security Administration to develop and distribute a comprehensive training program in early 2007 to assist with screening at terminals and vessel boardings,” Bernstein said. Beyond this, PVA has encouraged its members to apply for federal maritime security grants, and it developed a template for applicants to use in seeking grants to purchase and install Automatic Identification Systems for vessel tracking.
PVA has an Alternative Security Program, approved by the Coast Guard, that’s available to members and is used by more than 50 percent of the PVA fleet. “This alternative meets the requirements of the Maritime Transportation Security Act for vessel and facility security,” Bernstein said.

New marijuana laws add to operator concerns
Ferry owners have to contend with legalization of marijuana in several states. “We operate in waters governed by federal laws that define marijuana as an illegal substance,” Bernstein said. “The contradictory environment is challenging because passengers might bring drugs on board. While it’s still illegal to smoke marijuana in public in states that allow marijuana, the mere sight of it on board our vessels can cause the Coast Guard to take enforcement action, as it did in a couple of recent instances. This can be disruptive to operations and may even make customers think twice about riding our members’ vessels.” And, in this regard, the nation’s passenger vessel industry is one of the most highly regulated to begin with.
The impact of marijuana legalization in some states on crews has yet to be fully realized. “Our crews must commit to a drug-free workplace and also to drug-free off time,” she said. “PVA has worked hard to reduce the mandatory, random drug-testing rate from 50 percent to 25 percent, implemented in early 2013. This has provided major savings in time and cost to the passenger vessel industry. We’d hate to see an increase in positive test results and/or a need to return to the 50-percent test rate because of legalization in certain states.”
Passenger vessels tend to have higher turnover because of seasonal crew members, adding to recruitment and retention issues, she also said. Bernstein weighed in on another matter – known simply as rail jumping. “We remind people at every opportunity that jumping off boats is illegal,” she said. “It remains a problem for our industry. Enforcement lies with the Coast Guard, and we urge them to assist us with this issue.”

Federal regulations expand
Bernstein, meanwhile, is concerned about the onus of federal rules on ferry operators. “At every possible opportunity, PVA has spoken out about the need for the government and the Coast Guard to take into account the cumulative burden of regulatory mandates,” she said. “The industry is in danger of being overloaded. We always put safety first. But we find ourselves challenged by it, along with other demands on our crew and resources, particularly during emergencies.”
She pointed to the financial cost of compliance for small businesses. In a study conducted for the Small Business Administration, small firms faced a regulatory cost of $10,585 per employee in 2008, she noted. Bernstein further insists, “This was probably an understatement for the comprehensively regulated passenger-vessel industry.”
Bernstein also discussed marine casualty investigations. “The most frustrating aspects of the Coast Guard’s casualty investigation and reporting processes are its inconsistent application, inappropriate restriction of operations and an outdated reporting form.” She explains, “Industry has been waiting for Navigation and Vessel Inspection Circular, or NVIC, guidance from the Coast Guard for years, and during that time operators have struggled with running a business in an uncertain environment.” According to Bernstein, the Coast Guard sometimes halts vessel operations amidst conflicting interpretations of requirements. “It second guesses seasoned mariners’ professional decisions,” she said. “Whatever happened to honoring the mariner?”
In the Coast Guard’s reporting form 2692 for Marine Accident, Injury or Death, “We’d like to see the $25,000 threshold for damages increased to reflect inflation,” Bernstein said. “This amount is outdated and hasn’t changed in over 25 years.” She said the PVA has worked with the Coast Guard to find workable solutions on casualty reporting. “PVA appreciates the tackling of big picture issues on form 2692 by the Towing Safety Advisory Committee.” TSAC includes members of the barge, towing and other industries.

Most U.S. ferries are privately run
Nearly two-thirds of U.S. ferry operations are privately run, with about one-third publicly administered, and the rest are a combination of both. Federal funding is authorized by the Moving Ahead for Progress in the 21st Century Act, or MAP- 21, Public Law 112-141, under section 1121, which set aside $67 million in 2014 for maintenance and improvement of the nation’s ferries. Under the act, the Federal Highway Administration uses ferry-operators census data from the Bureau of Transportation Statistics to allocate funds.
In addition to ferries, the PVA represents owners and operators of sightseeing, excursion, dinner cruise and gaming vessels, overnight cruise ships, private charter boats, whale watching and eco-tour vessels, day-sailors and windjammer sailing boats. Looking ahead, Bernstein says PVA will continue liaising with the Coast Guard to keep these vessels safe. She encourages members to take advantage of PVA’s safety and security products, including a Risk Management Guide, DVDs and videos. As MarineNews went to press, Bernstein was awaiting results from the 2014 census of ferry operators to find out how much the industry has grown in recent years and a host of other statistics. It all adds up to heady times for America’s passenger vessel industry, which finds itself facing many obstacles while at the same time, steams full speed ahead. What comes next should be just as exciting. 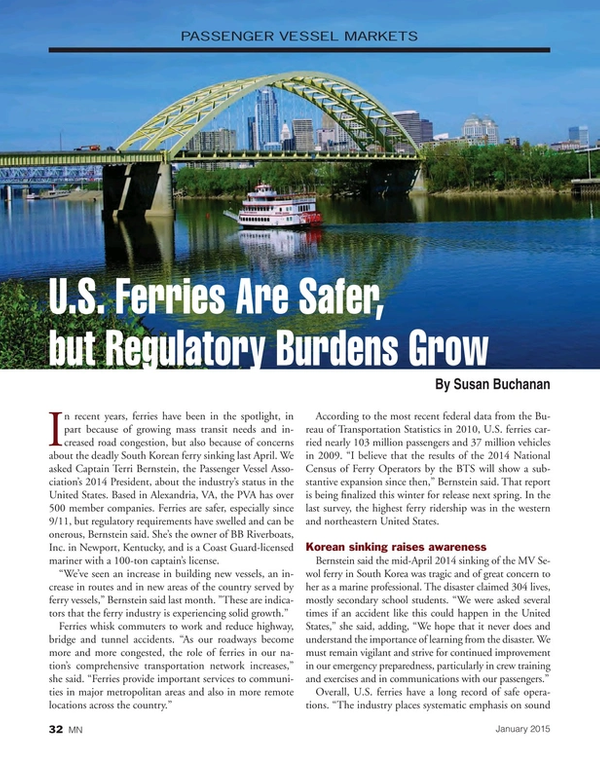 Read US Ferries Are Safer, but Regulatory Burdens Grow in Pdf, Flash or Html5 edition of January 2015 Marine News