We are often “not aware of what we do not know.” Nowhere is that adage more appropriate than in the world of marine finance, especially for the smaller workboat operator. Lost amidst the sometimes confusing language and ‘mumbo-jumbo’ that lenders and lessors use in describing their sometimes arcane products, it is a fact that, often, ‘the devil is in the details.’ Therefore, it never hurts to review what we think we might already know.

With the so-called subchapter M towboat rules still lurking perhaps just around the corner, and the continuing requirement for inland and offshore repower work to comply with coming EPA tier and localized ECA regulations, there will no doubt be plenty of reasons for a myriad of inland, offshore and coastal marine operators to be looking for short or long-term financing. The primer that follows includes a few definitions of some common terminology and should go a long way in helping to understand some of those details.

A Primer for Borrowers
Abstract of Title: a brief history of the titles, legal actions, liens or other claims against a vessel. An abstract of title is secured prior to the disbursement of proceeds of a loan or other financial transactions involving the vessel.
Acceleration Clause: Or “Acceleration Covenant” is usually included in a typical loan agreement wherein the lender may require repayment of part or all of an existing loan before maturity.  Such a clause may be triggered by failure to pay, material adverse change or other negative change(s) in the obligor.
Amortization: The amount of time required to pay off a debt in regular installments. It is also an accounting method of spreading out capital expenses over a period of time for tax and accounting purposes. Amortization, usually over the assets useful life roughly matches the asset’s expense with its revenue. It is similar to depreciation.
Balance Sheet: One of three financial statements normally part of a complete financial package. The balance sheet provides a “window in time” reporting of a company’s assets, liabilities and shareholder’s equity. It provides a look at what the company owns and owes and the amount invested by shareholders. The balance sheet balances: Assets = Liabilities + Shareholder’s Equity.
Balloon Payment: a final, unequal payment on a loan consisting of all unpaid principal, interest and other charges due at the time of payment. Balloon Payments are found in instruments which have a longer amortization period than the term or the loan.
Capital: Generally refers to the financial resources available for use by the company and is comprised of cash, other financial assets, and the hard assets owned by a business used in production.
Deferred Interest: Interest that is added to the principal balance of a loan when the terms of the loan allow for a scheduled payment lower than the amount of interest that is due. Similarly, “Capitalized Interest” allows for the interest on a loan (such as a construction loan) to accrue during the construction period when the vessel is not producing revenue.
Depreciation: Allocates the cost of an asset over its useful life for tax and accounting purposes. Effectively depreciation “uses up” the asset during a period dictated by the “class” of the asset. Different types of commercial vessels, or those used in different industries may have useful lives from five to twenty years. When a vessel changes hands and considered “new” to the buyer, the depreciation clock begins anew. For the seller, gain from the sale of the depreciated asset must be reported as income when the tax basis of the asset exceeds the sale price. This is known as “Depreciation Recapture.”
EBITDA: Earnings before interest expense, taxes, depreciation and amortization. This and variations such as EBIT, EBITD, EBT and EBITDAR (plus Rent) are methods of measuring the earnings of a company that adds back I, T, D and A to the net income number. When divided by the company’s total revenue it is a measurement of profitability. The higher the resulting number, the less operating expenses detract from revenue which leads to a more profitable operation.
Forbearance: Instead of forcing an obligor into foreclosure, a lender may negotiate a temporary postponement of mortgage payments. A temporary measure, forbearance provides the obligor time to repay delinquent amounts due the lender.
General Ledger: a complete record of a company’s financial transactions that holds information necessary to prepare financial statements. Account records include assets, liabilities, owner’s equity, revenues and expenses. Each transaction is posted as both a debit and a credit as a debit in one account and as a credit in another. Both credits and debits should equal each other.
Interest Rate Swap: An agreement between two parties to exchange a stream of future interest payments for another based on a specified principal. Often fixed rate payments are exchanged for a floating payment linked to an interest rate such as the LIBOR. This is done to manage fluctuating interest rates or secure a somewhat lower interest rate.
Leverage: A measurement of the use of various financial instruments, debt, lease commitments and other obligations used to provide capital, finance acquisitions or other assets or contractual obligations to rent equipment over a specified length of time. The higher the company’s leverage, the greater the divergence between debt and equity. In this case, less is more.
LIBOR: The London Interbank Offered Rate is the rate that some of the world’s leading banks charge each other for short term loans. It is used to calculate interest rates on loans worldwide. There are thirty-five different LIBOR rates each day including overnight, one week, 1, 2, 3, 6 and 12 months in five different currencies. The one most often quoted is the 90-day U.S. dollar LIBOR.
Maturity: The finite time period a financial instrument will exist.  In a loan, when principal and interest are completely repaid to the lender, the loan has reached its maturity and no longer exists. Maturity and the term of the loan are interrelated. In a 60 month term loan, maturity is reached at the end of month 60.
ROI, ROE, ROA: Return on Investment, Return on Equity, Return on Assets. ROI: the return on the investments is divided by the cost of the investment (gain , minus cost, divided by cost = ROI); ROE: Net income as a percentage of shareholder’s equity reveals how much profit is generated from the money invested (net income divided by shareholder’s equity equals ROE); ROA: Total debt to total assets reveals how successfully the company is using assets to generate earnings (net income divided by total assets equals ROA).
Yield: Simply stated, the income generated by an investment.

There are many, many more definitions of equal importance. MarineNews readers can stay tuned to this space for future advice and wisdom. In the meantime, the U.S. Government’s latest Unified Agenda (published on November 21, 2014) now indicates publication of Sub “M” is planned for August 2015. Many industry stakeholders would characterize that timeline as overly optimistic, especially in light of recent comments by the Coast’s Guard’s own Chief Executive. That said, it is never too early to prepare for that next financial transaction. Before that happens, you need to speak the lexicon. 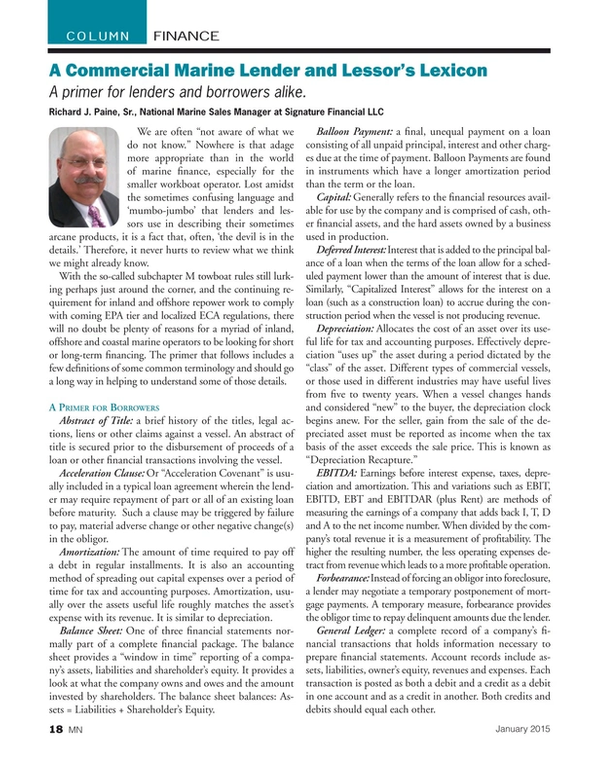