Kvichak’s Rapid Response Skimmers (RRS) are perhaps best known for their use by the U.S. Navy, but the design of these robust and well-designed units has evolved over time and today boasts placement in virtually every major spill organization.

When, just this past October, Kvichak Marine won a U.S. Navy contract for 12 30-foot Rapid Response Skimmers (RRS) for delivery over the next 18 months, with options for up to 30 additional skimmers to be delivered through 2019, that wasn’t necessarily earthshaking news. That’s because the aluminum Kvichak RRS is already the Navy’s tier one response asset. The new craft will supplement the Navy’s current fleet of over 85 units in operation in Navy ports worldwide since 1994. The big story, then, is why the Navy – and industry – keeps coming back for more.
With over 20 years of continuous production and development, the Kvichak RRS is a proven asset, fitted with patented technology, and boasts an exceptional record for safety, performance and durability. For its part, Kvichak – an aluminum boat builder for over 33 years – has been building skimmer boats since 1995 and has contracted for 100 to the U.S. Navy. But, the boats are anything but cookie cutter hulls and equipment. Responding to customer inquiries and requests, the RRS has evolved many times to arrive at what it looks like today. Looking deeper, the reasons for those changes become much more evident.

Today’s RRS Skimmer
Ross Hendrick, Pollution Control Products Division General Manager at Seattle-based Kvichak Marine Industries, told MarineNews in April, “The primary mission of the Kvichak RRS is the removal of light refined oils – diesel and jet fuel, for example – from the water surface in harbors and protected waters. When in government service, the vessels work in concert with the other Navy Oil Spill Response boats and various boom arrangement schemes. The RRS collects and then transports recovered oil to an offload location.” He added, “As presently configured, the RRS is fully operational in up to 3 foot significant wave height and is able to survive in up to 7 foot waves. Beyond this, it is capable of operating in all weather conditions, with ambient air temperatures ranging from 0 to 105 degrees F, and in water temperatures ranging from 28 to 95 degrees F.”
The rapid-response, shallow-water capable craft is ideally suited for use on oil spills in waterways, bays and harbors. The all-aluminum vessel is 30’-3” long, with a beam of 9’-8”, a draft of 2’-6”, and is easily trailerable. Powered by twin 90hp outboards, the RRS has a response speed of up to 17 knots and features an enclosed two person pilothouse for operator comfort.
Adaptable to a variety of marine spill scenarios, this highly specialized vessel works well in many recovery configurations, from free skimming through towed-boom applications, and is able to recover a very wide range of spills from light sheens to very viscous weathered oil products.  The skimmer’s oil recovery system includes a KVICHAK/MARCO Cl-1 Filterbelt oil skimming module, a KVICHAK/MARCO U-040 Capsulpump offload system with 50’ hose, and a recovered oil capacity of over 1,200 gallons.  The recovered oil tank configuration allows segregation of small volume spills to simplify post-spill decontamination. Onboard hydraulic power is supplied by an under-deck diesel HPU.
The key piece of equipment fitted onto the Kvichak RRS is the proprietary Filter Belt technology, which Kvichak acquired from Marko in 2004. The Filter Belt consists of a mesh belt, effective in any range of oil – crude / diesel / sheen – and this oil skimming system has been thoroughly tested and demonstrated to support a minimum Throughput Efficiency of 65%, a minimum Recovery Efficiency of 60%, and a minimum Recovery Rate of 6.5 gpm using ASTM Standard F 631-93 encountering a 1mm slick thickness of with Diesel Fuel Marine (DFM) and JP-5 at towed speeds of 0.5 – 2.5 knots, in calm and protected water surface conditions.

Always Evolving, Constantly innovating
The only constant in Kvichak’s history of producing reliable skimmers has, interestingly enough, been change. Over time, Hendrick told MarineNews, the firm listened to its customers and, when warranted, the initial design has been improved for all the right reasons. Just 8 foot in beam in the beginning, the Navy wanted a slightly large, more stable platform, and so Kvichak stretched the hull’s width to 9 feet – 8 inches. The boat’s length has remained the same. Utilizing gasoline powered engines, today’s version is also faster, employing larger engines.
Another subtle change included – at the customer’s request – the separation of the engines from the boat’s hydraulics. Today’s more stable RRS platform Also incorporates skimming capability of 1,300 gallons into 3 tanks, a opposed to the initial system which could collect just 1,000 gallons, into one tank. The U.S. Navy’s NAVSEA (acquisition) team also asked about adding an auxiliary battery and the raising of the diesel intakes in case of bad weather. This was done. Today’s RRS vessels employ two 90 HP outboards. Hendrick explains, “Depending on the customer; Honda, Yamaha, Mercury, and/or Suzuki engines can all be used. This is typically driven by who the closest local supplier is and the aftermarket service they can provide.

By the Numbers, Over the Years
• Generation I Skimmers, 1995: Kvichak wins a Navy contract for 29 each 28’ long x 8’ wide Rapid Response Skimmers (RRS) for the US Navy. The skimmers are based on modifications to a well proven design in production in various configurations since the 1980’s and featuring the “Kvichak/Marco Filterbelt,” a belt type oil recovery system with an outstanding reputation for real world oil recovery performance, quality and durability. The skimmers feature all aluminum construction, 1,000 gallon storage capacity and Mercruiser I/O (gasoline) propulsion. The skimmers are extensively tested by the Navy and exceed all performance and technical requirements. A total of 31 of these units were delivered from 1995 to 1997, significantly improving the Navy’s spill response capability in the US and overseas.
• Generation II Skimmers, 1997: Kvichak upgrades the vessel’s propulsion to Volvo I/O (diesel fuel) engine propulsion, improving safety, reliability and performance. A total 26 units were delivered from 1997 to 2005.
• Generation III Skimmers, 2005: This was the first major redesign of the RRS, changing propulsion from single Volvo I/O to twin 70hp outboard motors, and adding a diesel hydraulic power unit under deck, improving speed and maneuverability while also improving recovery system performance. A total of 11 of these units were delivered from 2005 to 2010.
•  Generation IV Skimmers, 2010 – Present: A second major redesign of the unit widened the skimmer by 20 inches to 9’-8” and involved upgrading the propulsion to twin 90hp outboard motors, increasing the size of the operator cabin, and increasing recovered oil storage capacity from 1,000 to 1,300 gallons. Beyond this and because of the improvements in stability, the skimmer can now safely accommodate up to 10 personnel for training purposes. 16 units were delivered from 2010 to 2014 and currently, 15 units are currently under construction for delivery in 2015.

Kvichak’s RRS: A World of Opportunities
Apart from its very important U.S. Government customer, Kvichak’s RRS output has some very familiar commercial names, as well. A similar version of the RRS was constructed for BP in the immediate wake of the Macondo Gulf of Mexico disaster. That (first) unit was actually delivered on the day the well was finally capped. But, BP isn’t Kvichak’s only commercial customer. Hendrick explains, “Our skimmers are in the inventory of all major US response organizations and are very well regarded. For the Macondo spill, in an effort to be prepared for nearshore oil, BP and Kvichak negotiated for an initial order of 15 skimmers after discussions and vetting of our product with several national spill response organizations. Soon after the initial order, BP increased the order quantity by 26 units to a total of 41 skimmers, but working together we agreed to an option to equitably cancel undelivered skimmers in case the full quantity was not needed.”
BP asked Kvichak and all of their equipment vendors to increase production capacity and expedite deliveries. And, this was done. Hendrick explains, “We were ahead on several unrelated projects in process, so working with our customers, all pulling on the same rope, we put those other projects on temporary hold and switched our full production capacity to skimmers only. When we got into full swing on skimmers, our production level was 3 to 4 skimmers per week including utilization of several fabrication subcontractors.” Ultimately, the dispersant was very effective and oil was largely kept from the shoreline, so working with BP, Kvichak ended production at a total of 29 units delivered.
After the response effort went into shutdown mode, BP began the process of disposing of massive amounts of supplies and equipment purchased, including the skimmers. The Marine Spill Response Corporation (MSRC) purchased 10 units and spread them around the US to augment their response capabilities. Elastec/American Marine, Kvichak’s international marketing partner for their skimmer line, purchased 5 units for resale. Several smaller response organizations purchased one or two units. And, most people were probably unaware that BP generously donated one unit to the National Spill Control School in Corpus Christi, TX, and reassigned the remainder to BP operations overseas (Europe and South America).
In the summer of 2015, it is clear that there is an abundance of oil spill response equipment on the market, and for that matter, in inventory worldwide. Still, when it comes time order to order the next piece of equipment, Kvichak’s RRS is a proven asset that transcends the test of time, global boundaries, and the forward march of technology. In other words: the ultimate workboat. 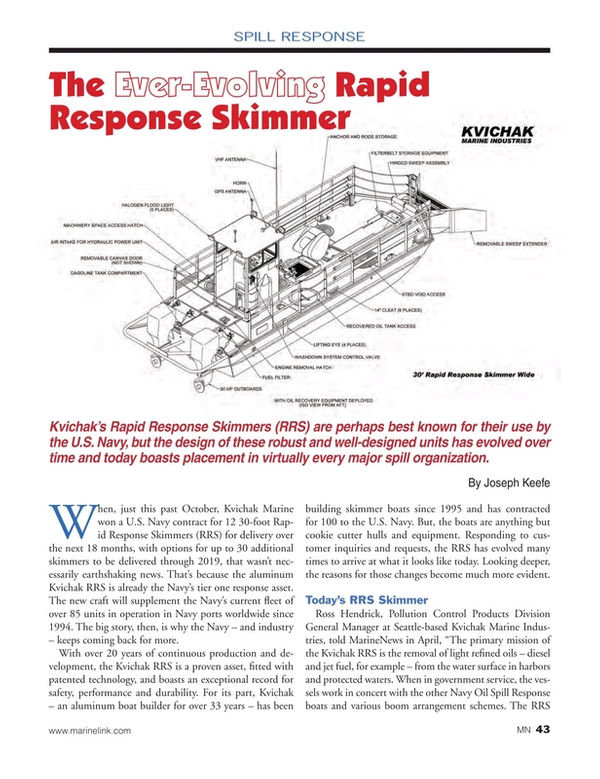 Read The Ever-Evolving Rapid Response Skimmer in Pdf, Flash or Html5 edition of May 2015 Marine News