The commercial fishing industry fatality rate is 30 times higher than the average of other US industries.  According to an analysis of commercial fishing fatalities for the period 2000 – 2009 conducted by the Alaska Pacific Regional Office of the National Institute for Occupational Safety and Health (NIOSH), vessel disasters account for 51 percent of fatalities, with the top two initiating events cited as flooding (25 percent) and instability (16 percent). Studies carried out by the U.S. Coast Guard show similar results, and add fire as the second leading cause of vessel loss.
Some specific cases include:
F/V KATMAI: A 1987 built, 92 foot fishing vessel sank in the North Pacific on October 22, 2009. Four crew members were rescued while seven lives were lost. Flooding was observed in the lazarette and in the engine room, the vessel lost steering and developed a list, which ultimately led to the vessel capsizing and sinking.
F/V LADY MARY: A 1969 built (modified 2001), 71 ft. fishing vessel sank in the Atlantic off the New Jersey coast on March 24, 2009. Only one crew member was rescued, the remaining six were lost. The surviving crew member did not witness the events leading to the vessel sinking, but the investigation report assumes that the lazarette was flooded with progressive loss of freeboard and buoyancy.
F/V COSTA & CORVO: A 1977 built, 71 foot fishing vessel sank in the North Atlantic on Georges Bank east of Nantucket Massachusetts on November 13, 2008. Three crew members were rescued, while one was lost. The investigation indicated heavy nets on deck resulted in a sudden loss of stability and progressive flooding, which led to the vessel capsizing and sinking.
F/V ALASKA RANGER: A 1973 built (converted 1989) 179 foot fishing/fish processing vessel sank in the Bering Sea March 22, 2008. 42 persons were rescued, while five were lost. The vessel’s steering gear room was flooded, and other adjacent spaces including engine room quickly experienced progressive flooding, leading to the loss of the vessel.
All of these incidents were tragic casualties, resulting in loss of life. The marine accident reports, as compiled by the U.S. Coast Guard, identify the types of accidents similar to the statistics: Flooding, capsizing, sinking and other accidents including fires. Leading up to these events are several underlying problems such as leakage, progressive flooding, lack of watertight integrity, equipment failure, and possible design flaws. And, maintenance of the original standard is not always documented or verified by regular examinations.

Managing Risk Effectively
Classification addresses these risks: Setting technical standards, approving plans according to rules, supervising compliance during construction, and verifying that these standards are maintained also throughout the life of the vessel.
There is no question that good procedures for safe operation and associated training are effective means for reducing the number of casualties. At the same time, in a majority of cases, the vessel itself – the platform – is critical for survival of those on board. Good design, strong hulls, reliability and availability of critical systems are crucial. Classification is an integral element of this in the maritime industry.
With this in view, U.S. legislation requires that all new fishing vessels of at least 50 feet overall in length are to be built and maintained to classification rules. DNV GL is the only classification society to develop rules specifically for the US domestic fishing fleet, addressing how fishing vessels are designed, built and maintained for safety.
The objective for DNV GL’s rules is to manage the main risks. We also know that cost effective solutions are critical for a fishing vessel, so a clear priority has been to make sure the classification process is as effective and practical as possible, yet at the same time achieving all-important safety objectives.
With this in mind, DNV GL has developed rules specific for US fishing vessels, coordinated from the company’s US headquarters in Houston, Texas. Simplification and optimization of the new rules has been done in consultation with industry, looking at the entire process: Design, approval, sourcing of equipment, surveys at yards during construction and subsequently onboard the vessel, with an eye on achieving safety goals for the fishing vessel and its crew, as well as maintaining efficient operations.   This collaboration with the industry will continue, and the rules are now available for download and use.

Weighing Costs and Benefits
Building to class, and maintaining to class standards means that some parts of the vessel will meet a higher standard than might be the norm in the industry. This increased safety carries a cost, which DNV GL has attempted to minimize by concentrating on the most critical elements. This investment may however also lead to significant benefits, in addition to potentially saving lives and reducing accidents.  Such benefits could include:

To help the industry with these changes, the US fishing vessel rules are simplified in scope compared to traditional classification rules, and the fees reflect this simplified scope. The rules allow for extensive use of “Industry Standard” materials and equipment, but class certification may still be required for some critical equipment.  All mandatory U.S. Coast Guard requirements must be met. Although the rules are primarily intended for steel vessels, aluminum or GRP may be used for vessels of less than 79 feet.
The domestic class certificate is valid for 5 years, with annual surveys and a dry-docking at the end of the 5th year. In some cases, surveys could be adjusted to correspond to seasonal fishing schedules, and could even be partly based on owner’s inspection, subject to approval and class oversight. Commercial fishing will always be a dangerous profession. That said; hazards and risks will undoubtedly be reduced with the broad adoption of classification rules, such as those developed by DNV GL.
Access the DNV GL rules at:
www.dnvusa.com/usfishingvessel
Access USCG Marine Accident Reports at:
www.uscg.mil/hq/cg5/cg545/casrep.asp

Joar Bengaard was employed by DNV (DNV GL) for more than 40 years in both technical and managerial positions in Norway, Japan, Korea and the US. After retiring two years ago, he has been retained as a consultant, as project manager for the US fishing vessel classification rules.
He can be reached at: [email protected] 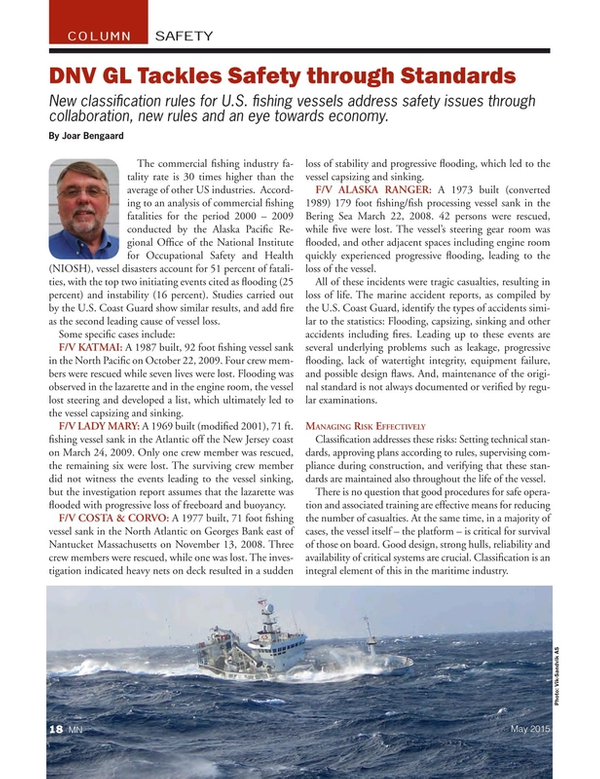