In the Gulf of Mexico, vessels serving offshore oil-and-gas exploration and production are being stacked or idled as the rig count there declines. Oil companies are retrenching while crude prices remain weak, with smaller operators and the shallow-water sector scaling back the most. As the situation unfolds, MarineNews asked David Barousse, general manager at Fleet Operators, Inc., a marine transportation firm in Morgan City, La., for his take on today’s predicament and what the future holds. The 40-year-old company owns and operates utility and supply vessels used in offshore exploration, production and construction. It also provides crew quarters. And, all of it – like the rest of the offshore support industry – is impacted by today’s market situation.

Oil and oilfield-service operators pare down
“As 2015 budgets rolled out, every company I can think of announced cuts in capital expenditures because of  the drop in oil prices since last summer,” Barousse said. “Chevron announced a 13-percent cut, Exxon a 12-percent cut and ConocoPhillips a 20-percent cut. These are all multiple, billion-dollar reductions that impact a wide range of service companies, including vessel operators.”
“Information about our main client segment – the privately-held exploration and production companies, operating in and beyond the Inner Continental Shelf – isn’t as publicly available as the major oil-company announcements,” he said. Louisiana’s Inner Continental Shelf extends three miles from the coast. “But their response to lower oil prices has been the same, just on a slightly smaller scale,” he said. “We’ve seen significant reductions in their oil-and-gas production operations. I haven’t heard anything about actual cuts in output, however.”
Large, deepwater operators typically have bigger pockets than shallow water players, and can maintain production during oil price declines. On the other hand, says Barousse, “Deepwater projects take a great deal of planning – more than shallow water operations, Equipment is more specialized, and these projects are technically complex. Deepwater operators typically have stronger cash flows because of their diversified, worldwide portfolios. They can keep moving forward with plans during a downturn in product prices.” That’s because, while Gulf offshore wells are usually expensive to drill, they can at the same time have long production lives.
In 2014’s last quarter, three deepwater projects by Stone Energy, Chevron and Murphy Oil began in mature fields in the Gulf, according to the Energy Information Administration (EIA). More new, deep projects are slated to become operational in the Gulf this year. Nonetheless, on March 18, results of the feds’ Gulf lease sale--which was mostly for deepwater--were smaller than recent sales, with just $583 million in winning bids coming from 42 companies.

Gulf rig count shrinks
Louisiana’s Gulf drilling provides most of the nation’s offshore oil. Before the recent downturn in crude prices, the Gulf rig count had rebounded from its weak, post-BP-spill level. This winter, the rig count shrank again, however. In its weekly release on April 6, Gulf rigs were down by 4 to 29, and that was well below the 60 recorded last summer, Houston-based oilfield-services firm Baker Hughes said. Beyond this, and in January, the number of U.S. rigs searching offshore and onshore for oil and gas dipped. The national count suffered its seventeenth straight decline in the week ended April 2. All U.S. rigs engaged in exploration and production totaled 1,028 by the end of that week. That was down by 20 from the prior week and was the lowest in nearly six years. U.S. oil rigs fell to the lowest levels since early 2011, and those seeking natural gas were the weakest since 1987.
These declines in the rig count, of course, hurt demand for energy services, including drilling, completion and production from providers like Dubai- and Houston-based Halliburton Co. This winter, oil-service companies Schlumberger Ltd. in Houston; Halliburton; Baker Hughes; and Ireland’s Weatherford International, with an office in Houston, each announced thousands of layoffs, including many for Gulf personnel. By February,  the four companies together had said more than 22,000 workers would be laid off, with many of them in the United States.
Halliburton and Baker Hughes, meanwhile, are preparing to merge, probably by the end of this year.

Day rates for OSVs slide
“Depending on a boat’s size, we’ve seen up to a 30 percent drop in day rates for the Gulf’s larger offshore supply vessels,” Barousse said. “For our production vessels working on the inner shelf, the rates have declined by up to 10 percent. They typically work on a much smaller margin than OSVs do.”
A day rate is the cost of a vessel for 24 hours. “Day rates include the vessel and the U.S. Coast Guard-required crew,“ Barousse said. “The makeup of the required crew depends on the vessel’s type. Fuel, lube, catering and additional crew for specific operations, such as cooks, riggers and cargo handlers, are separate from the day rate,” he said. Insurance is needed to hire a vessel. “Before you get to the point of charging a day rate, insurance requirements are worked out in the contract,” Barousse said.
Vessel demand along the Gulf, which was good in 2014, and also during the first half of this year, has slowed. “A quick ride down Bayou Lafourche towards Port Fourchon paints the current picture of idle vessels and crews fairly quickly,” Barousse said. “We’re seeing vessel operators of all sizes having to stack boats because of a lack of work and the day-rate drop. We’re even seeing deepwater service vessels getting stacked, and that’s been a hot market over the past few years.”
“Generally, when a boat’s stacked, the majority of the crew is sent home at no pay until work resumes,” he said. “Some crew members can fit into work schedules of vessels that remain in service. But pay cuts are typically made across the board to adjust to the lower day rates.” Gulf inland demand for boats has slowed too. “In addition to offshore, the inland vessel market has been hit hard by capital-expenditure declines and rig layoffs,” Barousse said.

Slowdown has a ripple effect
Port Fourchon in Louisiana’s Terrebonne Parish is the main terminal serving the Gulf’s offshore oil-and-gas. Over 400 vessels operate from the port a day, Port Fourchon executive director Chett Chiasson said in early April. “But because of sustained low oil prices, it’s no secret that oil-and-gas operators are reducing the number of vessels they’re using for offshore service,“ he said. “Along with less activity comes less need for services, and that trickles down to affect the entire service sector.”
Estimates are that 15,000 people or less work in the offshore Gulf. But they’re highly paid, and the ripple effect on Louisiana from those jobs, combined with spending by oil companies, is significant. The multiplier effect of offshore oil-and-gas jobs on the state’s economy is about 3.6, according to Loren Scott, Louisiana State University emeritus economics professor, in his last assessment in 2013.
How have weak oil prices impacted boatyards? “I assume Gulf shipyards are seeing a decline in new construction, new orders for OSVs, and also in repairs as vessel operators try to get through this slow period,” Barousse said.

Oil workers, vessel owners all watch crude prices
Needless to say, workers along the Gulf keep an eye on oil and gas prices. “Everyone in the offshore industry hopes prices will stabilize and start to recover,” Barousse said. “Oil companies quickly tighten their spending when cash flow slows. Operators’ budgets are set for 2015 so we know this year will be tough in the offshore Gulf. But once oil prices bottom, some of those budgets could be adjusted.” Adjustments will certainly occur if crude oil rebounds, he said. That’s because oil companies have to continually reinvest to maintain production levels.
“Listening to oil market experts can be tough because they don’t necessarily agree on what the future holds,” Barousse said. Excess oil supplies and the U.S. dollar’s strength have exerted pressure on crude prices. And then, because of onshore fracking, U.S. oil production is at a more than 40-year high.
“Middle East turmoil can be a market game changer but it’s never predictable,” he said. “Saudi Arabia’s strategy of keeping production unchanged has been a major, oil-price driver.” In March, however, Saudi output reached a 12-year high.
“Saudi production can affect prices more than, say, a nuclear deal with Iran, removing sanctions on Iran, or air attacks on Yemen,” Barousse said. The Saudis are the top producer in the Organization of Petroleum Exporting Countries (OPEC), and the group has continued to churn out oil at a steady rate even though European demand has eased. Crude oil prices in New York hovered at $52 a barrel in early April, down from $102 last August.

Offshore industry will rebound longer term
“Looking at oil futures, the months further out suggest some price optimism,” Barousse offered. “The offshore oil industry and vessel owners will continue riding the price ups-and-downs, and will adjust accordingly. This, of course, can be hard. A lot of great people in the industry are negatively affected by a slowdown of this magnitude.”
Anyone who lived through the previous oil crunch in the mid-1980’s, however, has to be hoping that ultimately, this downturn proves to be nowhere near as significant or long-lasting. By 1990, tens of thousands of oil workers and their offshore marine support counterparts had left the industry, never to return. This time, the oil and marine business arguably can’t afford that type of exodus. That’s because marine support for oil & gas is more than just vessels. Many of those boats idled today will have to crewed tomorrow, and as the old saying goes, “When the tide comes in, all the boats float.” In the meantime, for the oil support vessel operators and their crews, the long term rebound can’t come soon enough.

Susan Buchanan is a New Orleans-based business writer, specializing in energy, maritime matters, agriculture, the environment and construction. She holds a master’s degree from Cornell University in agricultural economics and an undergraduate degree from the University of Pennsylvania. 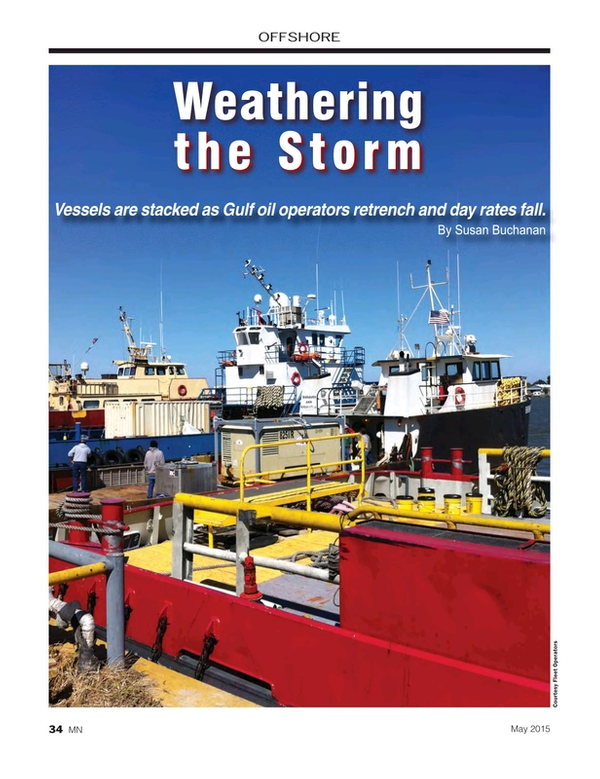 Read Offshore O&G: Weathering the Storm in Pdf, Flash or Html5 edition of May 2015 Marine News