A Novec 1230 gas suppression system provides a unique, Class-compliant and effective margin of safety for an offshore dive support vessel.

Despite the recent drop in oil prices, the marine sector remains extremely busy supporting the oil industry, and this will always remain the case. The squeeze on contractual pricing and labor is a recent issue caused by that drop in oil prices. Fortunately, the sector is led by legislation in the form of IMO/SOLAS regulations and respective Flag State requirements which are controlled by regulatory authorities such as DNV, Lloyds, ABS and UKAS, all of which requires a robust service sector that can attend to those needs when they arise.
No matter what the price of oil is, the need for safety and fire protection won’t go away. And, those requirements can change as a function of external audits and/or internal decisions to increase, supplement or upgrade existing systems on workboats already in service. Such was the case on a recent assignment carried out by UK-based fire equipment specialist Oteac. A dive support vessel which serves the North Sea oil and gas sector needed an upgraded fire suppression system. Oteac was contracted to install new systems in areas designated by the vessel to be in need of additional protection, as well as replacement of some outdated FM200 systems.
In total, the dive boat needed 14 systems, as identified by internal audits and Safety Inspections conducted by Subsea7. From these internal processes, it was decided to enhance the vessel’s existing systems and other areas which also required coverage. Beyond this, it was decided that, viewing the original suppression systems, issues with ozone depletion and possible toxic discharge on the vessel would be harmful to the crew. The change to the NOVEC type system was determined to be a safer and environmentally better option; in other words, a non-toxic alternative, if discharged.

Novec 1230
The refit process was a major job, involving the installation of 14 Novec 1230 gas suppression systems in DNV designated areas of risk on the vessel. The Novec 1230 system was selected because it is a user friendly and environmentally friendly medium for such suppression systems. Novec 1230, manufactured by 3M, is a unique fire extinguishing agent. Among the Clean Agents, it has the lowest atmospheric lifetime of 5 days. It is stored as a liquid, which makes it easier for transport, and also features a “zero ozone depletion potential.” As with other clean agents, it is an excellent choice for computer rooms, electrical control rooms, storage areas, and any high value area.
Novec is calculated to discharge within 10 seconds, and is normally calculated at a 4.2% concentration.
It is stored in containers as a low pressure fluid which, when discharged, transforms into colorless and odorless gas. Unlike other fluid extinguishing agents, however, it can be used with complete confidence to suppress fires involving electronic equipment. Once discharged, the agent can be dispersed through natural ventilation, leaving no residue to damage sensitive equipment. It is also non-conductive and non-corrosive.
Installations have a footprint similar to that of chemically-based clean agent systems and Novec 1230 fluid additionally has the advantage of having the lowest level of design concentration and the highest safety margin of any viable Halon 1301 or chemical alternative. That said and while certain HFCs (hyrdrofluorocarbons) and inert gases are used at design concentrations that are below the NOAEL (No Observed Adverse Effect Level) with safety margins from 7%, no other Halon alternative comes anywhere close to the Novec 1230 safety margin.
This is important because a fire on a vessel typically involves varied materials, rather than just combustibles which are common in land-based fires, these often require higher suppressant concentration levels. As the volume of the space on a ship is often difficult to calculate accurately – due to the complexity of the machinery – the installation’s designer will include more agent than the volume requires.

The Refit
On this refit install, the vessel’s electricians completed the interface between the Suppression System panel and vessels alarm system. A simple pressure switch within the panel was the connection point. Once that was accomplished, however, Oteac electricians commissioned the entire system, including the interface between system and vessel alarm. The scope of work included vessel surveys, DNV consultation and documentary approvals, manufacturer’s specification to DNV/Ships wheel standards, system cylinder installation in each area of risk and ensuring appropriate means of discharge and the fitting of alarm and high pressure stainless steel pipe work to activate or discharge the medium.
Preliminary drawings were presented for each area of risk on the vessel to DNV for approval. Specifications had to be met for everything from stainless steel pipework to pipe runs, valves and nozzles. Upon completion, a fully witnessed function test was required by DNV before giving acceptance certification. In fact, no gaseous system in the marine sector can proceed unless this route is followed. Once certified, the vessel was certificated and sent on its way back into service.
Flexibility and versatility were essential to address all issues that arose on the job, taking on additional stainless steel pipe installation which originally was not a quoted specification. The installation started in a dry dock in October and was completed on schedule in January, ultimately involving minimal disruption to the client’s operational activities.

Safety is King
No matter what the prevailing economic conditions, safety at sea – and especially in the oil and gas sector – will always trump finance. Changing regulations and risk profiles can and do mean that new and better will be required. In this instance, the client and its technical advisors recognized the requirement for additional and upgraded protection on board. Oteac made that decision a little easier with a time-efficient and price-competitive package that fulfilled those needs, without significantly impacting the vessel’s operational schedule. It’s a safe bet that you can do the same.

Andrew Wright serves as Oteac’s General Manager and has spent the last 29 working years in the fire and safety Industry. Prior to working at Oteac he built up his knowledge of the fire and safety sector though roles within various fire protection companies. 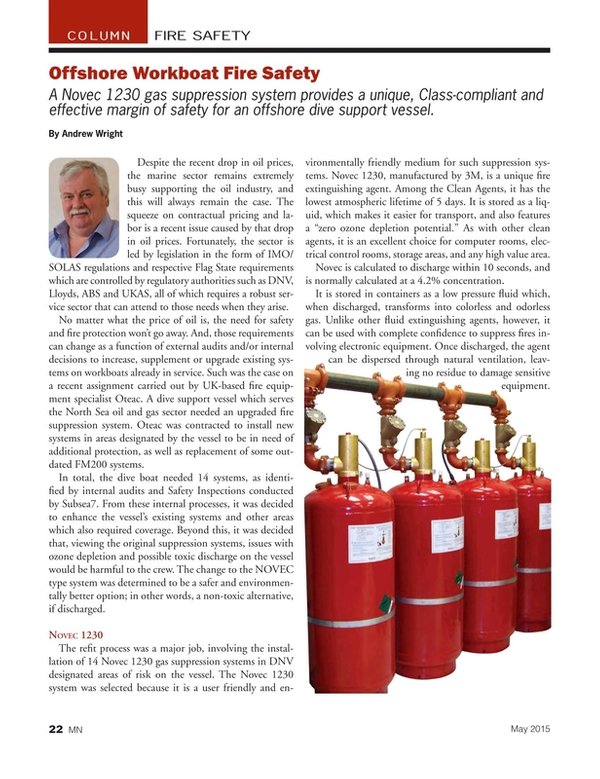