It is at times like this that bumper sticker humor comes in handy. One of my favorites has to be the infamous “God, please let me have another oil boom – I promise not to mess this one up” version that graced the bumpers of pickup trucks on the Gulf Coast in the late 1980’s. I lived through that cataclysmic event during my 14 years in Houston. It was in 1985 that the bottom had dropped out of oil, reaching a nadir of $12 per barrel. Using the time-honored Keefe family tradition of buying high and selling low, I eventually shed a primary residence and a three-unit rental property in the Bayou City during the worst of it.
It is okay if you find yourself inclined to ask, “So what?” It’s a good question. That’s because the Offshore Annual of MarineNews touches upon many things; none more important than the value of lessons learned. First and foremost amongst those is the mandate to not repeat the scenario that played out on the Gulf Coast in the late 1980’s. Back then, tens of thousands of workers (involuntarily) departed an industry that they had lost faith in, never to return. The void this created, even to this day, has left a generational and skills gap that quite frankly, the offshore sector hasn’t yet recovered from. We simply can’t afford to do that again. NOIA’s Randall Luthi and IMCA’s Jane Bugler touch on just a few of the reasons why. Turn the page and drill down for answers.
Safety and offshore energy are still inextricably connected. Beyond this, our expert commentators say that industry can’t turn its head from this reality ever again, even if the price of oil drops to 1986 levels. The trick will be how to accomplish that goal and still remain inside those scaled back CapEx budgets. It can be done. Inside this edition, you will find out how and why.
For those readers who need real data to support the notion that the oil industry can and does make it happen on a daily basis, look no further than this month’s BY THE NUMBERS entry, assembled by Dagmar Etkin, PhD, President and Principal Consultant at Environmental Research Consulting. Etkin, appropriately enough, examines the changing risks for offshore well blowouts in a statistical survey that sheds unique, balanced light on the real performance of the energy industry. While a catastrophic blowout scenario is a very rare event, contingency planning and preparedness, as well as technological advances in prevention will be important in the years to come. And when it comes to environmental research, nobody drills deeper than Etkin. The report starts on page 8.
Offshore Oil & Gas, Safety, Prevention, Response – and yes, oil pollution itself – all have a place in this month’s edition. Furthering the first four causes while eliminating the final challenge is what the industry is all about. And, you didn’t have to be selling real estate in Houston in 1987 to know that. 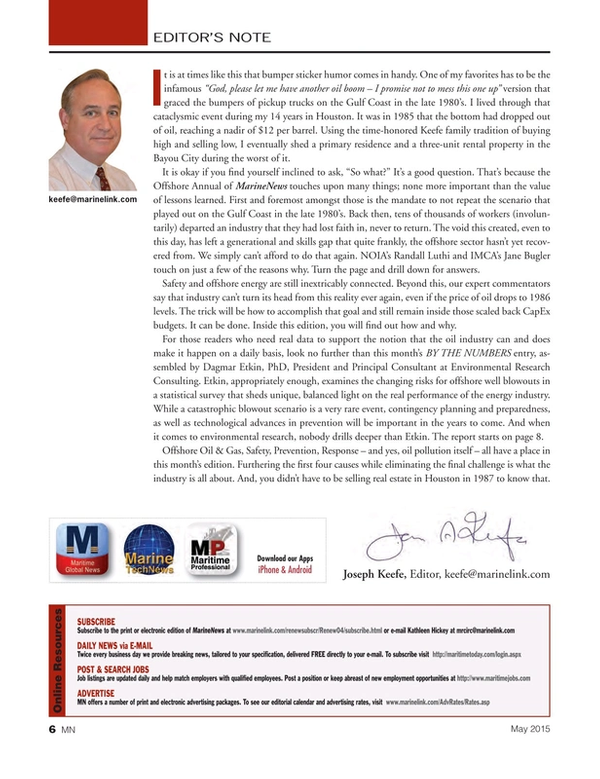