Last September, an Administrative Law Judge (ALJ) unsettled much of the U.S. maritime industry when he dismissed with prejudice a U.S. Coast Guard (USCG) action to revoke a Merchant Mariner’s Credential (MMC) despite his finding that the mariner’s urine had tested positive for cocaine. The case is referred to as USCG v. Hopper, SR-2014-14. The ALJ’s rationale for restoring a known cocaine user to commercial service was that the USCG failed to prove that the employer’s drug testing consortium had randomly selected the mariner using a “scientifically suitable method.”
American Maritime Safety, Inc. (AMS) considered the Hopper outcome to be a bad decision, both because it imposes harsh evidentiary consequences on the USCG for errors the agency did not commit and because it imposes an unsustainable burden on the maritime employer. If the decision is not reversed on appeal, AMS recommends that the USCG create a certified products list (CPL) of random selection software for the purpose of resolving technical disputes as to whether a mariner was randomly selected by a scientifically suitable method.
While we may wince at the prospect, the enlightened among us understand the policy reasons behind suppressing the use of evidence that has been unlawfully obtained. When an agent of the government has acted in excess of its authority, forbidding that agent to use the fruits of its ill-gotten gains is the means by which we discourage future violations. Yes, we don’t want to live in a police state. But, we also don’t want known cocaine users to return to performing safety sensitive functions without the benefit of rehabilitation. In Hopper, the apparent conflict was resolved in favor of the suppression of evidence and in derogation of maritime safety. AMS submits that there was no conflict to resolve.
It is well established that, when private employers engage in government-mandated drug testing, they are performing Fourth Amendment searches. When such an employer violates federally-mandated testing parameters, it stands to reason that prohibiting the employer’s use of resulting evidence is a legitimate means of discouraging future violations. In this instance, however, the ALJ did not suppress the employer’s use of the evidence; he suppressed the USCG’s use of the evidence. Depriving the USCG of this evidence does not effectively discourage unconstitutional behavior since the USCG never engaged in such conduct in the first place. Perversely enough, the primary impact of the suppression of evidence in this case is that maritime safety has been compromised.
This common sense argument has been recognized by the United States Supreme Court, which held that the exclusionary rule did not prohibit the Internal Revenue Service (IRS) from using evidence that was illegally seized by local police. The Court logically concluded that the societal costs of excluding important evidence from the IRS proceedings outweighed the deterrent effect on illegal searches in which the IRS had played no role (United States v. Janis, 428 U.S. 433, 454 (1976). This rationale applies with still greater force to the facts of the Hopper case. If the USCG did no wrong, then no good is accomplished by compromising its enforcement action and maritime safety as a whole.
This is not to say that the maritime employer in the Hopper matter did wrong. The employer belonged to a consortium that utilized a recognized random software program. The ALJ did not find fault with the program per se, but rather with the inability of the consortium employees to testify concerning the mathematical formula underlying the program. In our view, that is akin to the IRS faulting a taxpayer for not being able to explain how his Texas Instruments calculator operates.
AMS’s ability to address the scientific suitability issue has been facilitated by its employment of a software developer, with an advanced degree in mathematics, who provides the requisite testimony in USCG proceedings. AMS also performs random simulations confirming that its software program performs in accordance with statistically acceptable limits. AMS, however, was originally chartered by heavily-unionized maritime operators who expected near-constant legal challenges to drug test results.  It is our position that the regulations should not – and do not – impose this level of evidentiary burden on the maritime employer.
In the airline industry context, federal courts have rejected the idea that an employee could evade the consequences of a positive drug test based on an employer’s initial failure to produce evidence of randomness. Rather, these cases have held that the burden is on the employee to provide an initial showing that an element of human intervention existed in the selection process. In Drake v. Delta Air Lines, Inc., 2005 U.S. Dist. LEXIS 14789 (E.D.N.Y. 2005), court jury instructions required that airline employee prove by a preponderance of evidence that the airline’s selection of the employee for drug testing was not random, aff’d 216 Fed. Appx. 95 (2d Cir. 2007). In Northington v. Warden, 113 F.3d 1246, 1997 WL 242255, at *2 (10th Cir. 1997), the burden of proof shifts to the government only after the employee has “offered some evidence raising a genuine factual dispute as to randomness of the tests …”
A maritime employer should no more be expected to explain the mathematical formula underlying a commercially accepted random software program, than explain the forensic acceptability of gas chromatography/mass spectrometry as a testing methodology. The federal government has ordained the acceptance of this methodology.
Significantly, the USCG has effectively decreased the evidentiary burden on maritime employers by adopting a CPL of acceptable alcohol-testing devices. As a general rule, maritime employers are not required to prove the bona fides of these devices, but only that they operated these devices in accordance with the manufacturers’ instructions. If the USCG is unsuccessful in reversing the Hopper decision, AMS urges the USCG to develop and publish a CPL for random selection software products so that maritime employers are released from the extraordinary burden of having a mathematics expert on staff to explain the logarithms underlying their software.

Lee Seham is the President and General Counsel of American Maritime Safety, Inc. He graduated from Amherst College and received his law degree from NYU Law School. Mr. Seham has negotiated testing protocols and harassment prevention programs for a wide range of clients engaged in the airline, maritime and sports industries. These include Norwegian Cruise Line, Maersk Line Limited, Air Portugal, the Allied Pilots Association and the NBA Referees. 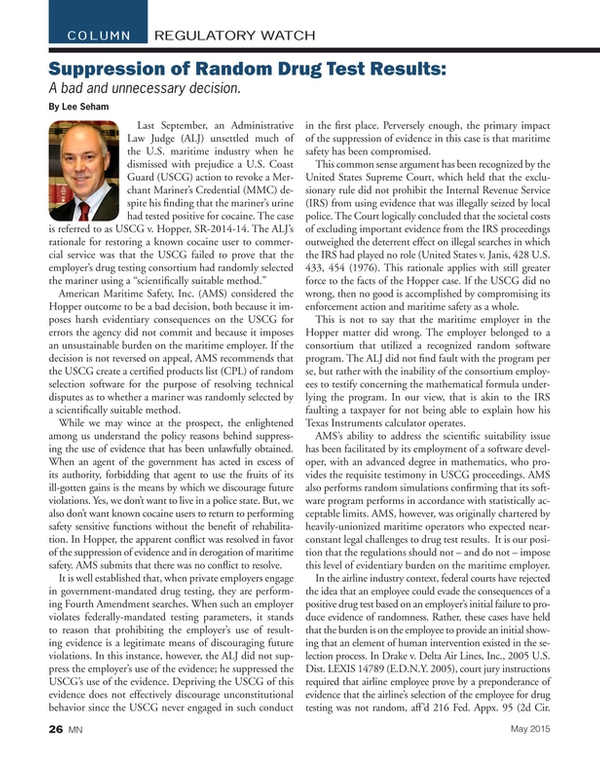 Read Suppression of Random Drug Test Results: A Bad and Unnecessary Decision in Pdf, Flash or Html5 edition of May 2015 Marine News