At the end of 2013, the team of Sembawang Shipyard of Singapore and Teekay Shipping Australia will deliver the new scientific Research Vessel Investigator to its owners, the Commonwealth Scientific and Industrial Research Organization (CSIRO), an agency of the Federal Government of Australia.
Investigator is designed to be among the most capable and quietest non-naval research vessels in the world. It will serve Australia in diverse scientific operations ranging over an area from the equator to the ice shelf of Antarctica and spanning almost one-third of the circumference of the globe.
The “design and build” contract for construction of this ship was awarded to a team led by Teekay Shipping Australia and Sembawang Shipyard of Singapore. The design was developed by RALion, a joint venture between Vancouver BC Naval Architects, Robert Allan Ltd, Alion Science and Technology of Alexandria, Virginia and Alion Canada of Ottawa. The contract was awarded to this international team in January 2011. An extensive program of model testing and design work was completed by November of that year. The vessel was launched on July 21, 2013 and then officially named Investigator at a ceremony in Singapore on September 5, 2013. It was due to be completed and turned over to the owners at the end of 2013.
Investigator has been designed to handle the heat and humidity of the tropics and the cold and ice of Antarctica while working safely and effectively in the broad expanse of the Great Southern Ocean separating these extremes. This ice capable vessel has also been designed to meet the underwater radiated noise requirements of the DNV “Silent R” notation up to 11 knots – a capability that enables her to undertake the most sensitive types of environmental research.
Investigator is fitted out with a full range of scientific laboratories, science and fishing winches, coring equipment, air and water sampling devices, and acoustic systems. It is capable of general-purpose oceanographic survey operations in coastal and deep ocean areas, including the physical, chemical and biological oceanography, multi-discipline environmental investigations, ocean engineering and marine acoustics, coastal hydrographic survey, marine geology and geophysics, bathymetric surveys and fisheries research.
In support of these missions, the ship is extensively equipped to perform all the following tasks:
•    Acoustic habitat mapping
•    Acoustic surveys in support of bathymetric, geomorphological and biological research using a combination of hull-mounted, drop keel mounted, and towed transducers
•    Acoustic surveys of marine species
•    Acquiring geological samples of the ocean bottom in depths of up to 5000 m
•    Acquisition of benthic samples of the ocean bottom at depths up to 6500 m
•    Acquisition of up to 20-30 m core samples of the ocean bottom at depths up to 7000 m
•    Bottom trawling to depths of up to 4000m
•    Calibration of ship mounted transducers
•    Conduct horizontal or oblique plankton tows over the stern or over the side of the Vessel
•    Conduct oceanographic sampling with rosettes of up to 36 bottles and CTD instrument packages to >6500 m depth while continuously sounding
•    Freeze and cold store samples for further analysis at shore based facilities
•    Launch / tow / retrieve a broad variety of active and passive sensors and sensor platforms including magnetometers, hydrocarbon sniffers, sonar tow fish, AUVs and UUVs
•    Launch/tow/retrieve a variety of egg, larval, juvenile and adult fish sampling systems
•    Marine mammal and seabird enumeration, identification, tracking, and bio assessment
•    Mid-water and surface trawling
To accomplish the scientific missions above, Investigator is fitted with a gondola and two retractable drop keels to house the extensive scientific sonar and transducer suites, supplied by Kongsberg. The vessel is fitted with a stern ramp to support fisheries research activities.
Investigator is classed by Lloyds Register of Shipping with the following notation: +100A1, +LMC, UMS Ice 1C IWS, EP, Research Vessel, DP (AM) and DNV SILENT-R.
The vessel is twin screw, powered by an integrated diesel - electric propulsion and ship service plant provided by L3 Marine Systems. Three Mak 9M25C diesel generators provide a total electrical output of 9 MW at 690V. To meet the noise requirements of DNV Silent R notation, all three diesel generators are double resiliently mounted on araft system engineered by RALion and supplied by Mak. The L3/Indar 690V AC 2600 kW propulsion motors feature a resiliently mounted rotor and other design features to meet the noise requirements. These propulsion motors are believed to represent the first use of AC motors of this size range in a research vessel to meet DNV Silent-R requirements. Wartsila provided the 3.5m diameter 5-bladed propellers, which are specially designed to be cavitation free at 11 knots, and the complete shaft-line from motors to propeller. The ship is also equipped with an azimuthing, retractable bow thruster, Thrustmaster model TH1500MLR, rated at 1200 kW and with Becker Flap type high lift rudders, all creating a vessel with much enhanced maneuverability at low speeds.
•    First Platform Deck: scientist’s accommodation forward; stores and transceiver room midships, and control room, switchboard room, winch room and container hold aft
•    Main Deck: contains all the science labs, CTD lab offices and workshops and is the primary working deck
•    Forecastle Deck: crew accommodation, galley, mess, lounge spaces and galley stores, with the upper level CTD lab and CTD winch spaces aft and enclosed anchor and mooring space forward
•    02 Deck Level: senior crew, offices, hospital, chemistry lab, and boat deck
•    03 and 04 Decks: Senior Officers and Sr. Scientist accommodations and offices
The complete suite of fisheries, scientific, and ship’s deck equipment was supplied by Rapp-Hydema, including an array of coring, trawling, towing, general purpose, CTD deployment, drum, and anchor/capstan electric winches. Triplex AS, a Rapp-Hydema subsidiary, supplied the coring boom, pipe handler, over stern A-frame, and CTD Overhead crane. The aft deck is serviced by a Bergen DKF300 Main Crane, with a capacity of 25 metric toes at 12m, or 5 metric tons at 20m. In addition there are also a Bergen DKF40 utility crane and a Bergen DKF70 stores crane fitted.
Roll stabilization on the ship is provided by a U-Tube tank system designed by HOPPE. 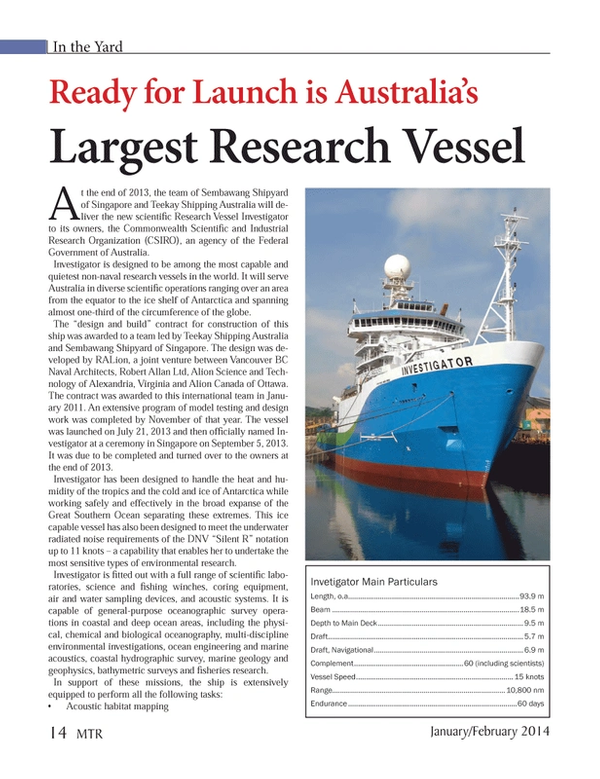