ACSA announced that the SeaExplorer glider (featured on this month’s cover of Marine Technology Reporter), developed by ACSA in partnership with ACRI, CNRS and IFREMER, completed a two-month record mission in collaboration with the Laboratoire d’Océanographie de Villefranche (LOV) of National Center for Scientific Research (CNRS) and Pierre and Marie Curie University (UPMC). “The mission objective was to evaluate the endurance of our first glider equipped with rechargeable batteries while performing several round trips between France and Corsica Island” said Dr. Hervé Claustre of the CNRS LOV. ACSA introduced rechargeable Li-Ion batteries as an effective, reliable and affordable solution. “The SeaExplorer glider has also acquired a wealth of high resolution data along its transects whose results will be presented by LOV at the Ocean Science Meeting in Honolulu Hawaii in February 2014,” said Dr. Claustre.
Launched on September 5, 2013, LOV scientists recovered the glider on November 5, 2013 at Bay of Angels on the French Riviera. Completing a two-month mission, the SeaExplorer glider, according to ACSA, became the first glider to break a double world record for multi-sensors Unmanned Underwater Vehicle (UUV) with rechargeable batteries.

Journey of the SeaExplorer
Reaching the milestone of 60 days and a total of 1,183 km on a single battery charge, the SeaExplorer glider was launched south of Nice and averaged 0.5 knots, providing more than 1,168 profiles of the water column from near surface to 500m depth with 100% communications even in high sea-states. Supervised by satellite telemetry from onshore office using ACSA’s IRIS software, the performance was manually stopped whereas internal parameters indicated 18% of its battery energy remaining.
Besides the platform’s endurance record, the scientific payload was equipped with SeaBird pumped CTD (Conductivity/Temperature/Depth) and Dissolved Oxygen sensors recording continuously at 4 seconds inter-sample time (metric resolution) for a total of 90 Mo. First comparisons of the SeaExplorer dataset with simultaneous profiles from a ship-borne CTD-rosette show very good data quality, even across strong temperature gradients, according to ACSA.
“I am delighted with SeaExplorer performing eight weeks and setting this record,” said Laurent Beguery, expert consultant for ACSA, from the French Operating Gliders Center (CNRS DT/INSU). “The performance of the endurance test is clearly a success. This means that this first rechargeable glider is now mature enough to represent a reliable alternative to alkaline and primary Lithium powered gliders. I personally do appreciate that this type of glider avoids operations of batteries replacement every 2 to 4 months and reduces, to 20 hours only, immobilization time for refueling at the workshop. In other words, for scientists, it makes lots of savings in materials replacement, technician man-hours as well as for ballasting time and … hopefully increases the Mean Time Between Failures (MTBF).” In addition, as most organizations – particularly research organizations – are budget challenged going forward, cost optimization concerns are today top-line discussion regarding the types of tools employed to study the oceans. Developers and proponents of SeaExplorer maintain that it has proven to require fewer technicians, helping to save costs. To understand the unique capability of rechargeable as a major step forward in the challenge to increase cost-effectiveness of gliders operations, Patrice PLA, Sales & Marketing Director said “Out of 10 months of at-sea operations per year, rechargeable batteries not only grant higher availability rate but also reduce operating costs between 75,000 to 150,000 Euros per glider over five years compared to alkaline and primary Lithium batteries traditionally used by scientists.”

The SeaExplorer Platform
SeaExplorer can navigate at sea for months to persistently gather subsea data down to 700m depth. For oceanographic applications, following six sensors are already integrated and available off-the-shelf: Conductivity/Temperature/Pressure (CTD), Dissolved Oxygen (DO), Chlorophyll, Phycobilins, Turbidity and Chromophoric Dissolved Organic Matter (CDOM). On-going developments concerns acoustic payload for marine mammals detection, nitrate sensor, video camera for jellyfish observation and an hydrocarbon sensor to monitor oil spills and marine pollutions. Also are considered current (ADCP) and turbulences sensors. Given the open software and hardware architecture of the scientific SeaExplorer payload, all users can easily and fastly integrate their own custom sensors. In addition, it is important to note that the interchangeable payload design enables users to conveniently remove and replace sections upon sensors needed. To increase operating reliability, new safety devices such as Argos and underwater pinger are now available in option. The SeaExplorer provides universities, governments and scientists with an affordable UUV to cost-effectively monitor the ocean.
www.acsa-alcen.com 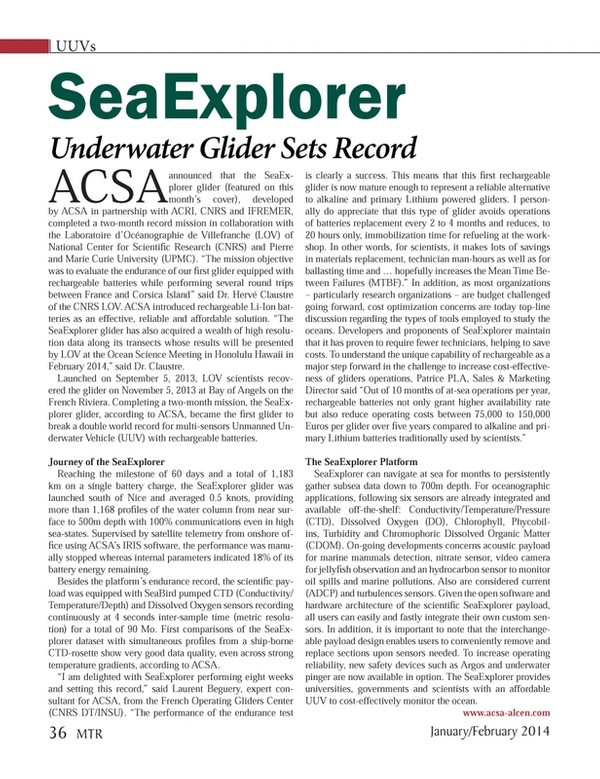