The Quest for Arctic O&G Standards

Improving and updating Arctic design standards for material, equipment and offshore structures for the petroleum, petrochemical and natural gas industries.

Seventy representatives from seven countries met for two days in St. John’s, Newfoundland and Labrador in early October 2013 to further the creation of standards for resource development in the Arctic.
The countries represented included Canada, U.K., France, Italy, Norway, Netherlands, and Russian Federation. It was the third annual meeting of the International Organization for Standardization’s (ISO’s) Technical Committee on Arctic Operations (ISO TC 67 SC8) which focused on advancements in standards with regard to (1) ice management (led by Canada), (2) escape, evacuation and rescue (Russia), (3) environmental monitoring (Russia), (4) working environment (Norway), (5) land extension and Arctic islands (Netherlands), (6) Arctic materials (Russia), and (7) physical environment (Norway). This technical committee is a follow-up to ISO 19906, which established Arctic design standards for material, equipment, and offshore structures for the petroleum, petrochemical and natural gas industries.

Out in Front
Recalling his first involvement in an ice management program in the Arctic in 2000-2001, Stephen Green commented on the current push to develop operations standards. He is Canadian chair of the ISO Canadian Mirror technical committee and general manager of Provincial Aerospace’s Environmental Services Division in St. John’s. “Now, with better technology,” Green said, “We are in a position to more effectively utilize oil and gas reserves, and with the reduction in Arctic ice, there is a commercial opportunity for shipping using the northern sea routes. The Arctic train is leaving the station,” he observed, “and you can’t stop it. You have three choices: You can either be on the train and influence its course, you can stay behind at the station, or you can be under the train.” He added that the technical committee’s focus is to be proactive and work together to develop standards for the protection of people, the environment, and assets. “Even if Canada decides not to drill in the Arctic,” Green said, “there’s drilling in western Greenland.
We have an obligation to make sure that risk is minimized. When someone is drilling outside your borders, it becomes a global issue.”
The International Oil and Gas Producers Association (OGP) has championed the development of Arctic standards since the committee was struck in 2011, noted Green. Industry representatives at the meetings included individuals from OGP, Husky Energy, Statoil, BP, Chevron, Shell, Gazprom (Russia), ENI (Italy), and TOTAL SA (France). Representatives from Petroleum Research Newfoundland & Labrador, Canada-Newfoundland and Labrador Offshore Petroleum Board, BN Petrole AFNOR (France), and the Petroleum Safety Authority (Norway) also participated in the meetings, as did the Canadian Standards Association and Standards Norway.
The technical committee convenes plenary meetings twice a year. The first meeting was in Moscow in November 2012, the second in Rotterdam in April 2013, and the next meeting will be in Paris in April 2014. The work groups continue to collaborate between meetings.

Progress & Planning
On October 2, the work groups with representatives from each country reviewed their progress to date, outlined the work that needs to be completed, and began to develop work plans. Votes were cast in a plenary session on October 3, with each country having one vote. “Bringing together international experts face to face is an essential part of the international standards development process,” said Paul Steenhof, project manager for CSA Group (Canadian Standards Association). “By meeting together, we’re able to start developing the work plans. This often occurs through a negotiation process where face-to-face time is critical.” Once a New Work Item has been accepted by the Subcommittee, the standard for that item is typically scheduled to be completed in three years, said Steenhof. If a four-year development track is required, ISO is notified.
The Ice Management standard, for example, is set to be finalized by the end of June, 2016. Stephen Green is vice-chair of the ice management work group (Robin Browne of Chevron Canada is chair), which encompasses ice, currents, meteorology, and icebreaking and ice management operations utilizing remote sensing, aircraft sensor, and radar data. Their work will culminate in the creation of a manual that will include checklists that oil companies will use in the development of their ice management plans.
António Simões Ré who is Canadian vice-chair of the ISO technical committee and also working group lead of the escape, evacuation, and rescue work group, likened the decision making process to that of the United Nations. “Countries have different approaches to legislation,” he said. “For example, traditionally, the Russians tend to be more prescriptive while Canadians are more oriented towards performance-based, so you have to work through that.” Simões Ré, who is a senior research engineer at the National Research Council of Canada’s Ocean and Coastal Rivers Engineering facility in St. John’s, noted that the biggest challenge for his work group is addressing the requirements of both onshore and offshore operations. Whereas winter conditions are severe in the offshore areas, onshore operations may benefit from temporary infrastructure such as ice roads which facilitate evacuation. He doesn’t think the hazards and challenges of working at the different latitudes in the North can be addressed by improving on existing technologies.
“A step change is needed,” said Simões Ré. “We need new ways of doing things, due to the remoteness and lack of infrastructure. The solutions will need to be more self-sufficient and robust.” He foresees either the development of designs that are fitted for all hazards and conditions that work in all seasons—but that do not do anything exceptionally well—or multiple types of evacuation technology that will be tailored for each season. While Arctic operations won’t provide a high-volume market for new technologies, Simões Ré sees this as an opportunity for companies to showcase their design capabilities, which will likely lead to applications in less challenging environments.
St. John’s was chosen as the venue for the meetings in Canada due to the high concentration of harsh-environment expertise residents here. “This has been an opportunity for Newfoundland and Labrador to truly become the Arctic gateway,” said Green. “If we can survive on the Grand Banks, it’s a great testing ground for the Arctic.” He added that Newfoundland and Labrador has the highest per capita involvement on the technical committee internationally.
Companies located in the province that were represented at the meetings include: Provincial Aerospace, AMEC Environment & Infrastructure, AKAC Inc., Iceberg Logistics Inc., Rutter Inc., Oceans Ltd., Oceanic Consulting, Deltaradar, and Virtual Marine Technology. OceansAdvance, the organization that represents the ocean technology cluster in the province, coordinated the event. “The entry of the International Organization for Standardization into the Arctic equation can be seen as a strong affirmation that the region is on the cusp of major development,” said Les O’Reilly, executive director of OceansAdvance, “especially across the oil and gas industry, including the ocean technology sector.”
The National Research Council of Canada (NRC) on the Memorial University campus hosted the event. Financial and logistical support for the October meetings was provided by NRC. Atlantic Canada Opportunities Agency and the Government of Newfoundland and Labrador’s Department of Innovation, Business and Rural Development provided financial support, and the City of St. John’s provided logistical support.

Bottom Line: Standards + Cooperation = Safety
Characterizing Canada’s effort with regard to the technical committee, Green said, “When it comes to the Arctic, we have the federal and provincial governments and the private sector working together. We’re all on the same oar, which does not happen in a lot of countries.” Steenhof said the Arctic is “a huge priority”—not only because of its high concentration of natural resources, but also because of the necessity to ensure sustainable economic development as well as environmental protection—noting a recent protest by Greenpeace in the Russian Arctic.
“I attended a meeting last week with senior representatives of oil and gas producers,” he added, “and they emphasized the need for safe operations in the Arctic. Operational standards are of critical importance in this regard—to the oil companies in particular. They need the social license to operate in the Arctic, and standards help them achieve that.”


(As published in the January/February 2014 edition of Marine Technology Reporter - www.seadiscovery.com) 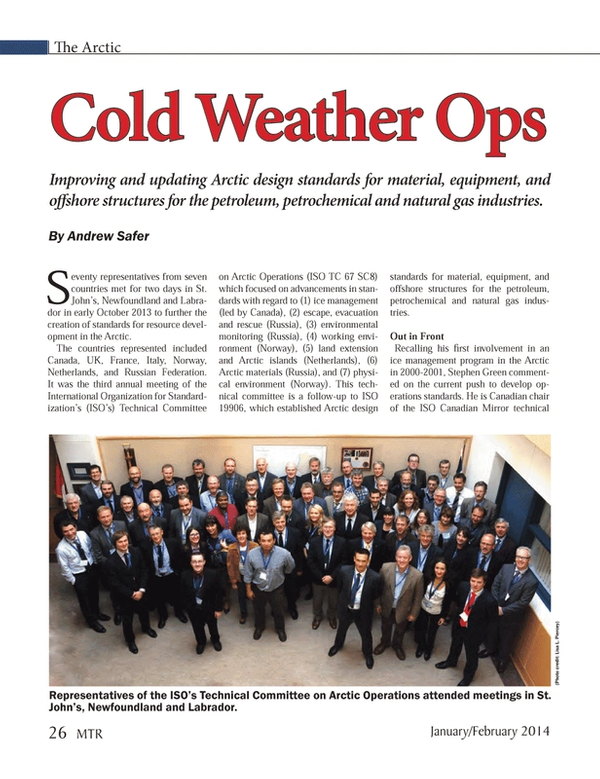