Navigating the Rough Waters of Misclassification

Over the last few decades, international trade has exploded, driven in large part by tremendous improvements in efficiency and transportation cost reductions related to the containerization of freight.

Reaping success depends on an intricately orchestrated chain of events where owner-operator independent contractors move containers to and from ports; haul them to the warehouses or rail yards then to their final destination – stores and factories across the country.
Today, the relationship between motor carriers and the owner-operators has never been more complicated. A big part of truckload transportation since deregulation, the independent contractor model is dependent on whether these owner-operators are truly classified as independent contractors or actually misclassified employees, deserving of employee status which includes wages and benefits.
Owner-operators, who would like the benefits that are extended to employees, and state and federal agencies and union forces, who would like to collect wage and salary taxes, have come together to cast a shadow over this business model. This has compounded the proliferation of class action lawsuits that have piggybacked on top of government agency actions.
In the maritime industry, the movement of containers from the docks to warehouses, rail yards or consignees must be seamless and timely. When this doesn’t happen, efficiency goes down, costs go up, containers get lost, customer timetables are compromised and competition becomes stiffer.
Your Line of Defense
When owner-operators are not being treated as an independent transportation vendor, they are more likely to challenge the motor carrier or maritime company they’re working for in a court of law to cover their loss expenses and disability. And, this is only the tip of the iceberg in terms of the exposure drayage companies and other container carriers could face. Once an independent contractor is reclassified, all of the issues and exposures associated with an employee come into play. This will be a significant financial shock to an operation that has previously had very few employee-related assets.
Maritime fleet companies accused of misclassifying owner-operators will face significant exposure, both legally and financially. This will open their business up to scrutiny, including questions such as: Are the owner-operators eligible for employee benefits; paid time off, salaried vacation days and short-term disability? Are they being compensated according to market standards? And, an area of particular focus because of the potentially high price tag: If there is a loss of cargo or an accident, is the independent contractor covered under the motor carrier’s workers’ compensation policy?
As a maritime owner or operator, there are a number of steps you can take to protect yourself. Here’s a list of eight best practices for maritime companies:
Stay Up on Local Laws and Issues
There is a thin veil between the shipping/drayage company and the owner-operator, independent contractor. If this veil isn’t held tight, the shipping company could be construed as the employer, resulting in enormous tax, salary, worker’s compensation and other insurance implications.
Several recent settlements out of California pitting trucking companies against owner-operators claiming the latter should be classified as employees have raised a red flag for many maritime employers. In fact, one of the largest drayage operators in California sought to protect itself by converting to an all-employee model, with only company-owned units. Just over a year after the switch, the company found it could not compete with pricing from port-trucking companies using owner-operators, and therefore closed their operations in the state.
This is just the beginning. This issue is not only likely to persist, but is likely to spread to other coastal areas around the country in the coming months. In order to survive—and even thrive—today’s shipping companies must evaluate their relationships with owner-operators. Review the list of best practices above, consult a local regulatory compliance attorney and create policies and procedures to ensure you’re maintaining the right relationships from here on out.
The Author
Steve Bojan is Vice President and Transportation Practice Leader, Risk Services Division, HUB International.
(As published in the May/June edition of Maritime Logistics Professional) 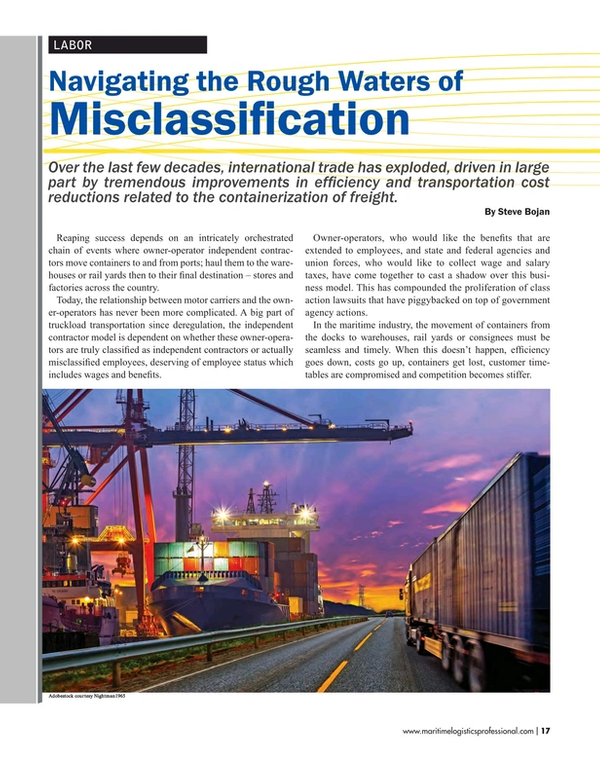